BBC Weather forecast a showery system will slowly make its way through Scotland and into northern England from Thursday, causing temperatures to remain in single figures in most of the affected areas. The rainy conditions will come with strong wind plaguing western areas of the UK as the wind direction changes overnight. Carol Kirkwood said: “The wind has really swung round from a northwesterly to that westerly through the course of the night

“Weather front is sinking south introducing some rain, the heaviest of which will be across the north and the west of the country.

“We’ve got a weak weather front moving from the west to the east producing some rain and we’ve got some showers in the southwest, some of those will travel towards the southeast through the course of the day.

“Now there’s a lot of cloud around, sunshine will be limited today.

“These black circles represent the strength of the wind gusts. Now, behind this weather front, which is a cold front, it’s going to turn much colder as we go through the day so only 6C will be the temperature in Stornaway and the showers are likely to be wintry.” 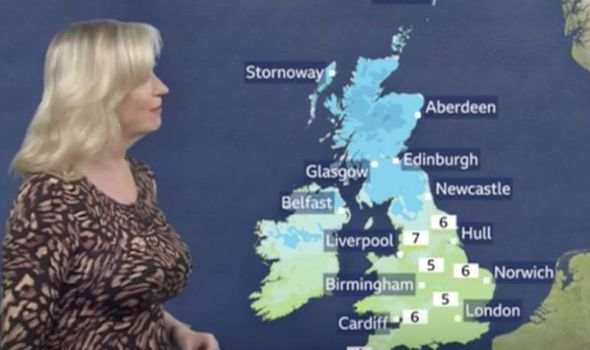 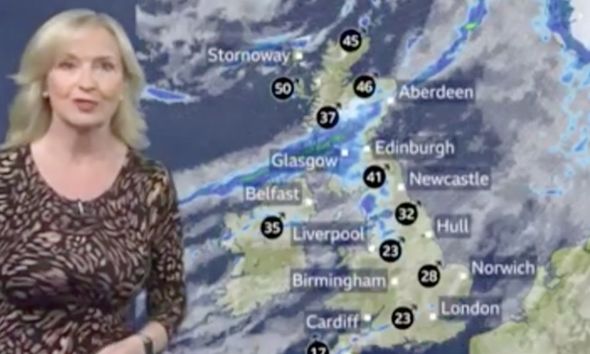 “The reason for the colder air is the wind change is back to a northerly and it follows this weather front south.

The weather front weakening all the time, taking this cloud and its increasingly patchy rain with it. 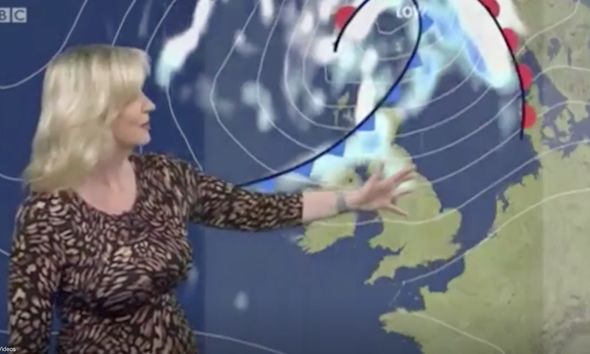 The BBC Weather meteorologist added: “We’re looking at 5C, it’ll still feel cold just not as cold as further north where we’ll also have some frost and the risk of ice on untreated surfaces.

“As we head on through the course of Friday, our weak weather front sinks further south with this cloud increasing and patchy rain.

“Behind it, there is some sunshine and feeling cold, the showers are wintry in nature.

“Temperatures in Aberdeen only 5C.” 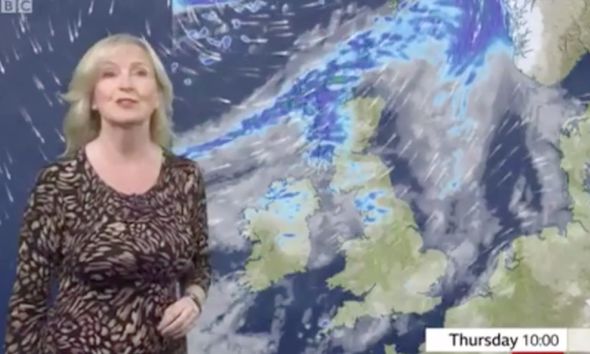 On Friday, a band of cloud across Wales and southern and central England will spread southwards during the day bringing spots of light rain and drizzle.

A drier and brighter day further north as most areas will be dry with lengthy spells of sunshine however there will be a few showers, these wintry in nature.

Saturday will be cloudy and wet across southeast England but it will be bright elsewhere with a mixture of sunny spells and scattered showers, these wintry in the north.

Sunday will be largely dry and bright with spells of sunshine however there is a threat of showers developing, some may be wintry.