BBC Weather forecaster Carol Kirkwood has predicted temperatures ranging from between 14C to 26C across the country. Windier conditions are expected as we enter the weekend and heavier showers are expected to begin to fall across the South East of England. Ms Kirkwood predicted cloudier conditions in Western Scotland and Northern Ireland. And the Met Office has issued a warning for incoming thunder in the South East of the country.

“Now over the next few days, temperatures are going to slide, moving from tomorrow into the weekend.

“And we’ll see some heavy showers, there will still be some sunshine in the forecast and it’s also going to turn windier as we go through the weekend as well.

“What we have at the moment is this band of cloud, which through the evening and overnight period has steadily been moving Northwards, and it’s currently producing some showers across the far South East of England.

JUST IN: Horror as British couple thrown off Air Canada flight for NO REASON 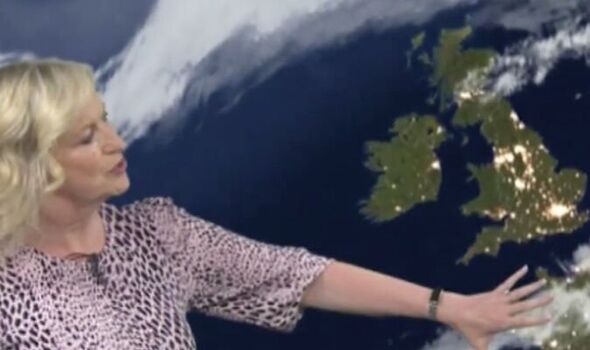 Ms Kirkwood added: “Now that’s going to be Northwards as we go through the course of today, so currently there are a few showers dotted around the Channel Islands.

“And gain coming in across the South East moving Northwards, but they’ll become a little bit heavier and potentially thundery later on in the day.

“So a lot of dry weather to start with, but more cloud across Western Scotland and Northern Ireland, thick enough for some drizzle but we still will see some breaks in it.

“And some sunny intervals developing, now these are our temperature, 13C to about 27C, but the North Midlands somewhere in Northern England could hit once again 28C, possibly even 29C.

Ms Kirkwood said: “Now through this evening and overnight you can see how those showers continue to migrate Northwards.

“Still the potential for them to be heavy and thundery, they are showers of course not all of us will see them, we could see some patchy mist and fog form as well just locally.

“And it’s going to be quite a humid night, these are our overnight lows falling away to between 9C and 15C.

“And you can already see the first signs of a weather front coming away just in time for tomorrow.

Ms Kirkwood added: “So talking of tomorrow, still a lot of dry weather still a fair bit of sunshine.

“The showers pushing Northwards across Scotland will be heavy in places and thundery, as we go through the day our weather front arrives bringing rain in across Northern Ireland also through parts of Wales and the South West.

“Ahead of this we could see some lighter rain, this could be more persistent and the wind is going to pick up as well.

“Temperatures down here today, 14C to about 25C or 26C as we push further East, where we expect it to be drier.”