BBC Weather forecaster Carol Kirkwood said the UK is in for another “hot, humid and sunny” day as temperatures remain put in the high 20s for most of the country through Tuesday. The BBC Weather meteorologist noted the heat will be a key feature in areas experiencing violent storms as she warned the torrential rain could spark flash flooding in some regions. Ms Kirkwood said: “The forecast for today is a hot, a humid, and a sunny one.

“In Scotland, for example, is going to be much more humid than it has been for the last few days.

“You can also see on the pressure chart that we’ve got a weather front just aligned across parts of the northwest – that’s been producing some torrential rain as we were going through the course of the night and also a lot of lighting strikes as well.

“So there’s torrential rain the Glasgow area, the Lowlands heading up into the Highlands but we’ve also got an arm of that extending into the southern Uplands, down and across the Pennines, for example.”

Ms Kirkwood warned commuters to beware of potential flooding as they travel across rainy areas. The Met Office has a yellow thunderstorm warning in place through Thursday covering the whole UK. 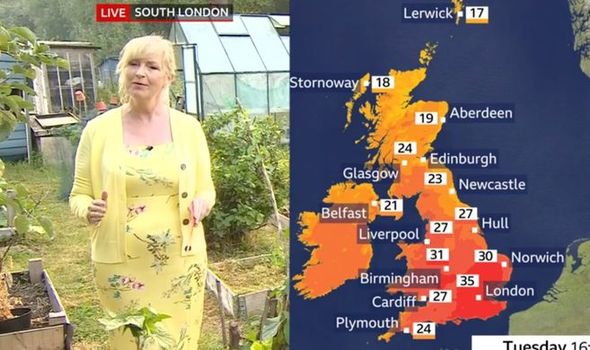 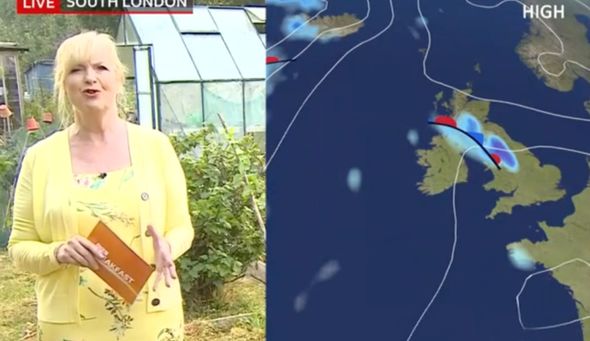 The forecaster continued: “If you’re traveling, do bear that in mind, there is the risk of flash flooding.

“We’ve also got a lot of low cloud, mist and fog in the west coast, southwest England through parts of Wales and the east coast. Some of that will linger through the day but any fog that’s formed inland will burn away quite quickly.

“Through the course of the day what you’ll find is the thunderstorms in the north will migrate northwards and we’ll see some farther thunderstorms develop as we look at what’s happening in the south.

“It’s going to be another hot and humid day, temperatures up to 35C in the south, we’re looking at about 30C in the Midlands, 26C-27C in the Pennines and northern England. 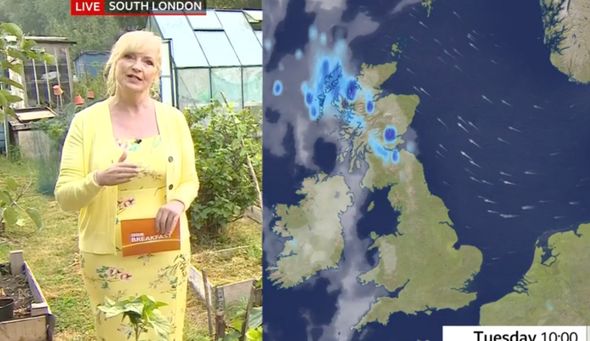 “But for Northern Ireland and Scotland, it’s more likely to be between 19C to 24C so a bit more comfortable for you, although it will still be humid.”

Ms Kirkwood said the high temperatures are expected to persist overnight, leaving Britons struggling with high humidity for the third night in a row.

She said: “Through this evening and overnight, watch those thunderstorms again move northwards across Scotland.

“We’ll have some more coming in, some more localised from the east and then further thunderstorms develop as we go into the second part of the night into the north and the west. Some of those will be torrential. 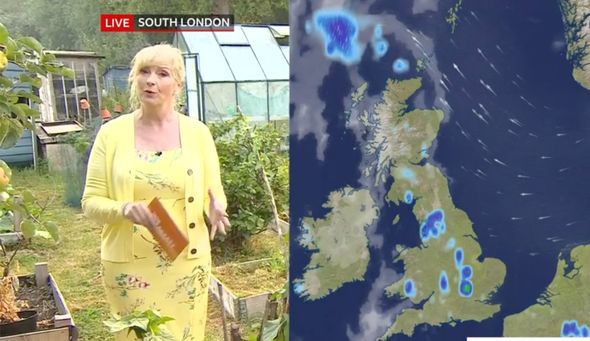 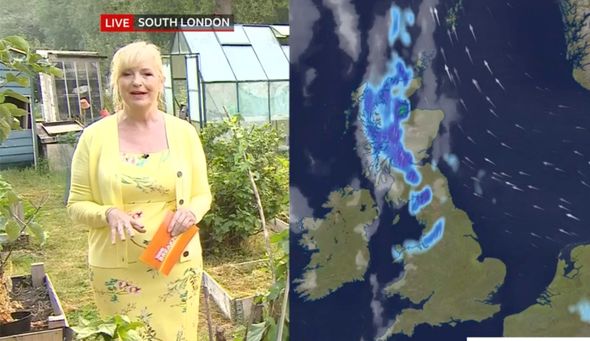 “Temperatures, well, it’s going to be another sticky one. We’re looking at lows not getting down below double figures and for some, we’re looking at overnight low of 20C in the southeast.”

The scorching weather is set to remain in charge through Wednesday and Thursday, with thunderstorms becoming more widespread in the run up to the weekend.

“We’ll have some heavier rains and thunderstorms coming in from the southwest. Temperatures similar to today, still peaking at about 35C.”