Monday marks the Summer Solstice, also known as the longest day of the year because of the number of daylight hours. It means the sun will set later than any other day of the year. For Lerwick in Scotland, the sun will dip below the horizon at the late time of 10:34pm. As for the weather, it will be a mixed day for much of the UK with patches of wind and rain lingering in the South while a ridge of high pressure further North will mean drier and more settled weather.

Ms Kirkwood said: “This week it will be a cool wet start, in the South we have got rain at the moment and it will be showery and really cloudy later in the week and for some of us it will also be windy.

“We have got this weather front coming up from the south which is bringing the rain but we have also got a ridge of high pressure across the north so things here are a bit more settled.

“The rain has been steadily coming in across southern areas as we have gone through the early hours of today and it is very slowly moving northwards, not making a huge amount of progress, it might make it as far as South Wales later.

But she warned these areas could see some rainfall. 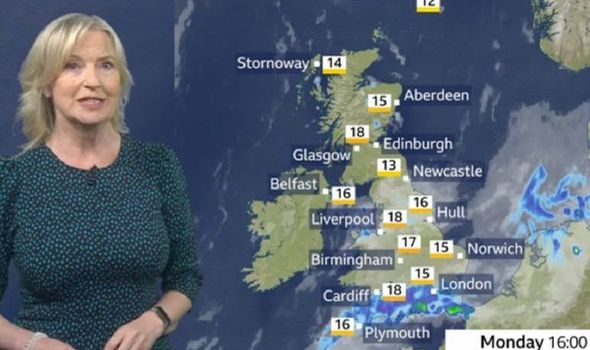 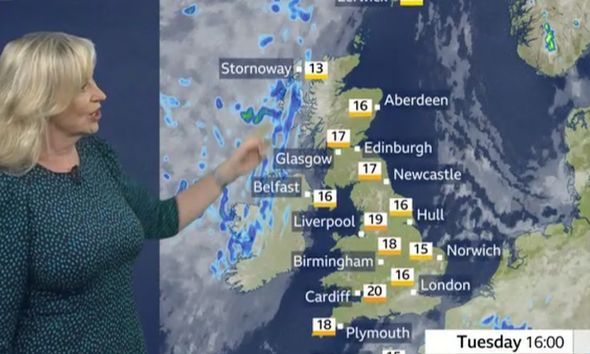 The BBC weather presenter added: “At the same time we have got a weak weather front sinking out of Scotland into northern England and the far north of Wales, that could produce the odd spot (of rain).

“But in between we are looking at some sunshine the best of which will be the north west of Scotland and also Northern Ireland.”

She added how it will be “quite breezy across southern England” throughout Monday.

While Monday will see highs of 18 degrees in Liverpool, 18 in Edinburgh, 17 in Birmingham, 16 in Belfast and 15 in London. 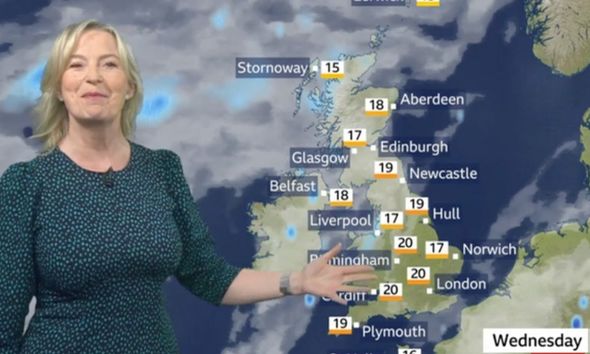 “Through this evening and overnight the rain tends to peter out, there will be some cloud in the South clear skies across much of the rest of the UK.

But she warned “temperatures will fall away under those clear skies” and could even fall to freezing temperatures in parts of Scotland.

The weather presenter added: “Tuesday will be a dry and a sunny day, a weather front in the South pushing away as we go through the day but the cloud building across Western Scotland and Northern Ireland.

Tuesday will see highs of 20 degrees in Cardiff, 19 in Liverpool, 18 in Birmingham and 17 in Glasgow. 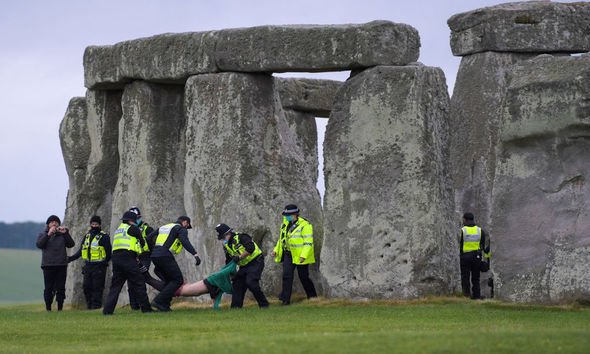 She added: “The weak weather front which will sink southwards taking its cloud and patchy rain across Scotland, Northern England and Northern Ireland.

“But further South it will be drier, it will be brighter and we will have temperatures 17 to about 20 degrees.

Wednesday will see temperatures soar to 20 degrees in London, 20 in Birmingham, 19 in Newcastle and 18 in Aberdeen.