The bill will cut U.S. emissions, but not nearly enough. It’s “like losing 20 pounds when you need to lose 100 pounds” one expert said. 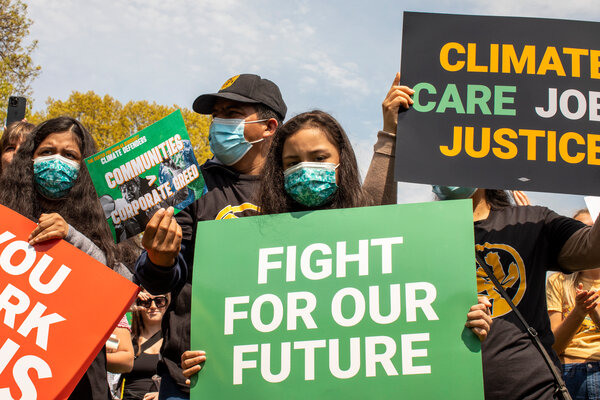 By Lisa Friedman and Coral Davenport

WASHINGTON — For the septuagenarian lawmakers who wrote the historic climate bill that Congress passed on Friday, and the 79-year-old president who is about to sign it into law, the measure represents a “once in a generation” victory.

But younger Democrats and climate activists crave more. They look at the bill as a down payment, and they worry a complacent electorate will believe Washington has at last solved climate change — when in fact scientists warn it has only taken the first necessary steps.

“This bill is not the bill that my generation deserves and needs to fully avert climate catastrophe, but it is the one that we can pass, given how much power we have at this moment,” said Varshini Prakash, 29, who co-founded the Sunrise Movement, a youth-led climate activism group.

Christina Tzintzun Ramirez, 40, president of NextGen America, which is focused on young voter participation, said it wasn’t lost on her that the climate deal was crafted largely by older men and included some concessions to the fossil fuel industry.

“We are very clear that it took so long because our Congress and Senate doesn’t look like the American people,” said Ms. Ramirez, whose group is working to elect more young progressives committed to attacking global warming. “The climate crisis is going to unfold on the majority of young people. Most of these congressional representatives will be dead by the time we face the consequences of their inaction.”

In a letter to members of Congress, Ms. Ramirez and about 50 other youth leaders told lawmakers “your work is not finished.”

The House voted 220 to 207 Friday to approve the Inflation Reduction Act, with Democrats pushing past united Republican opposition. It was a replay of earlier this week, when Democrats in the Senate passed the bill without a single Republican vote. The legislation provides $370 billion over a decade for investments in wind, solar, clean hydrogen, energy storage and other measures designed to shift the American economy away from the fossil fuels that have underpinned it for more than a century.

Analysts estimate the new law will draw down the United States’ carbon dioxide emissions to the lowest level since Lyndon Johnson was president — 20 percent below 2005 levels by the end of this decade, on top of another 20 percent cut that will come as a result of market forces already in place. Together, that would eliminate an estimated one billion tons of pollution per year by the end of 2030, almost enough to meet Mr. Biden’s pledge to cut emissions 50 percent by 2030.

Senator Patrick Leahy, 82, Democrat of Vermont, praised the legislation when it passed the Senate as “a once-in-a-generation bill to meaningfully address the real threats of climate change,” a characterization echoed by several of his colleagues.

But scientists say the United States needs to do more. It must stop adding carbon dioxide to the atmosphere by 2050, which the bill won’t achieve. That is the target all major economies must meet to constrain average global temperature rise to 1.5 degrees Celsius, or 2.7 degrees Fahrenheit, above preindustrial levels, scientists say. Beyond that threshold, the likelihood increases significantly of catastrophic droughts, floods, wildfires and heat waves. The planet has already warmed an average of about 1.1 degrees Celsius.

“It’s like losing 20 pounds when you need to lose 100 pounds,” said Robert McNally, the president of Rapidan Energy Group, an energy consulting firm. “And this won’t get you there.”

A substantive legislation. The $370 billion climate, tax and health care package that Congress approved on Aug. 12 could have far-reaching effects on the environment and the economy. Here are some of the key provisions:

Auto industry. Until now, taxpayers could get up to $7,500 in tax credits for purchasing an electric vehicle, but there was a cap on how many cars from each manufacturer were eligible. The new law would eliminate this cap and extend the tax credit until 2032; used cars will also qualify for a credit of up to $4,000.

Energy industry. The bill would provide billions of dollars in rebates for Americans who buy energy efficient and electric appliances. Companies would get tax credits for building new sources of emissions-free electricity. The package also includes $60 billion set aside to encourage clean energy manufacturing and penalties for methane emissions that exceed federal limits starting in 2024.

Health care. For the first time, Medicare would be allowed to negotiate with drugmakers on the price of some prescription medicines. The bill would also extend subsidies available under the Affordable Care Act, which were set to expire at the end of the year, for an additional three years.

Tax code. The bill would introduce a new 15 percent corporate minimum tax on the profits companies report to shareholders, applying to companies that report more than $1 billion in annual income but are able to use credits, deductions and other tax treatments to lower their effective tax rates. The legislation would bolster the I.R.S. with an investment of about $80 billion.

Low-income communities. The package includes over $60 billion in support of low-income communities and communities of color that are disproportionately burdened by climate change. Among the provisions are grants for zero-emissions technology and money to mitigate the negative effects of highways and other transportation facilities.

Fossil fuels industry. The legislation would require the federal government to auction off more public space for oil drilling and expand tax credits for coal and gas-burning plants that rely on carbon capture technology. These provisions are among those that were added to gain the support of Senator Joe Manchin III, Democrat of West Virginia.

“After the champagne is drunk, there will be a moment of sobriety,” he said. “How do you close the rest of that gap?”

To reach his 2030 goal, Mr. Biden would still have to impose new regulations on emissions from power plants, vehicle tailpipes and methane leaks from oil and gas wells. State and local governments would have to set new standards to compel the rapid adoption of electric cars, wind and solar powered electricity, and energy efficient buildings to make up the last percentage points.

For the far heavier lift — essentially eliminating the nation’s fossil fuel emissions in the next two decades — Congress would need to enact even more ambitious legislation than the historic bill just passed by a razor-thin majority, experts said.

To zero out emissions by 2050, Congress would have to take on the politically difficult burden of taxing, penalizing, banning or phasing out the coal, oil and gas pollution that is driving global warming.

“It will be necessary for Congress to put sticks in place,” said Dallas Burtraw, an energy policy expert at Resources for the Future, a nonpartisan energy and environment research organization based in Washington, D.C.

The new law buys Congress some time to act, Mr. Burtraw said. “It doesn’t need to happen today or tomorrow or this year or next year,” he said. “But it does have to happen before the end of this decade.”

“They’re really talking about it from this integrated perspective of jobs, justice and decarbonization,” she said.

Representative Sean Casten, Democrat of Illinois and a scientist who owned a clean energy company, said Democrats and activists deserve “an end-zone dance” after the bill is signed, and then must get back to work.

In the near-term, Congress will have to make it easier to build the transmission lines and other facilities needed to allow the explosion of solar, wind and other renewable energy promised by the new law, he said.

Mr. Casten, 50, also wants Congress to eliminate tax breaks and other subsidies granted to the oil, gas and coal industries — a move he said will trigger markets to “correctly allocate capital” to clean energy industries.

Even as scientific evidence links climate change to extreme weather that is causing death and destruction in the United States, polls show that the American electorate is divided along partisan lines about the scale of the problem and what to do about it.

A Pew survey published in July found a majority of Republicans and Independents who lean Republican, about 82 percent, say Biden’s climate policies are hurting the country while 79 percent of Democrats and those who lean left were broadly supportive.

But Republicans between the ages of 18 and 29 surveyed were more likely than older adults to say the federal government needs to act on climate change and 64 percent wanted the government to require power companies to use more energy from renewable sources. And younger Americans of both parties — those born after 1981 — are more likely to be politically engaged on climate change than older generations, according to a 2021 Pew survey.

Celinda Lake, a Democratic strategist, said she believes the political support for a carbon tax could grow, particularly as Millennial and Generation Z voters enter office.

“In 2024, the Millennials and younger generations will outnumber the Boomer voters,” Ms. Lake said.“These are the voters who vote on this issue. It mobilizes them. In the next 20 years we will see a massive shift in the electorate toward people who want to save the planet.”

Wisconsin State Representative Greta Neubauer, 30, led the rollout of a package of 22 climate bills this year, five of which she wrote. None received a hearing in the Republican-led legislature, much less a vote. But Ms. Neubauer said she still finds the number of former activists like herself now turning to politics encouraging.

“When Trump was elected we all had to look around and recognize the failures of our movement,” said Ms. Neubauer, who ran on a climate platform and was elected in 2017. Many of her fellow former activists have recently joined political campaigns or considered running for office themselves “to take the fight off college campuses,” she said.

William Reilly, who served as head of the Environmental Protection Agency under President George H.W. Bush, said Democrats will be lucky to just maintain the new provisions that just barely got through the Congress.

“As long as you’ve got a unanimous Republican position against it, they’re going to have to fight just to keep what they’ve got in place,” Mr. Reilly said. “They’ll have to fight to keep the clean energy incentives, fight to keep any regulations. Republicans will try to claw it back, unless at some point enough Republicans feel that they are politically free to convert.”

He noted that the climate and tax bill includes incentives for nuclear power and other Republican priorities, including carbon capture technology that could allow coal or gas-burning power plants to keep operating with lower emissions.

“Republicans can either go after that in the next Congress and champion the first-ever bipartisan climate bill, or they can stay where they’ve been for the last decade,” Mr. Backer said. “My generation will be disappointed if they don’t lead from the front.”

Rhiana Gunn-Wright, 32, director of climate policy at the Roosevelt Institute, a liberal think tank, and an architect of the Green New Deal, said she is worried a sense of complacency will settle in after passage of the climate bill.

“Over the next seven or eight years there will still, unfortunately, be extreme weather events and we still need to keep pointing out the cause of those: carbon emissions. And from where? Fossil fuels,” she said.

Ms. Gunn-Wright said she knows activists who fought for decades to see a president sign major climate legislation will be tired. But, she cautioned, “In the U.S., we have a history of taking a lot of first steps and then not taking the second, third or fourth step.”