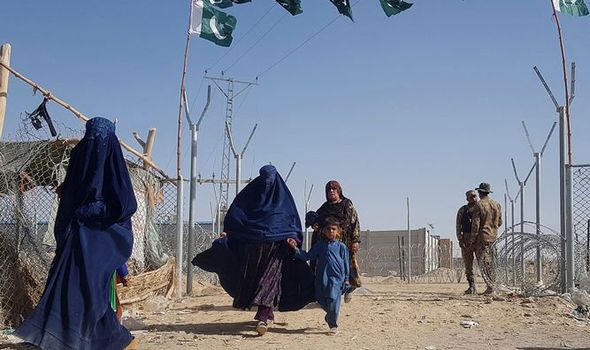 The move comes amid concerns that insurgents could use captured heavy artillery — originally provided by the US — to bombard the airport.

There are also fears they could join Islamic jihadis in using suicide bombers.

The evacuation is expected to begin in earnest on Tuesday and will take up to 10 days to complete.

It could turn into a race against time as the Taliban closes in on the capital. Their forces were last night fewer than 30 miles from the city, after taking the town of Pul-e-Alam, a key staging post for an assault on Kabul.

And they had captured Mazar-i-Sharif, a major city in northern Afghanistan, where President Ashraf Ghani had travelled to two days ago to rally troops.

This followed victories in its second and third largest cities — Kandahar and Herat — and means that the militants now control half of Afghanistan’s 34 provincial capitals.

The evacuation plan, Operation Pitting, which was worked out a week ago, is split into two elements.

Members of the Parachute and Pathfinder Regiments are tasked with ensuring the airport remains secure and protected from Taliban advances, while Special Forces will provide deep intelligence and safe escort for embassy staff and other UK nationals.

Some 650 British troops drawn from 16 Air Assault Brigade, commanded by Brigadier Dan Blanchard, are the UK’s high-readiness response force and have been deployed to Afghanistan.

A second tranche of 600 Royal Marines from 45 Commando have been placed on standby.

Last night, sources confirmed their pre-flight briefings at Merville barracks, Colchester, included a warning about the potential threats they may face, which range from roadside bombs and suicide bombers to bombardment by captured artillery and drones.

While commanders want to avoid combat, all Paras are being deployed with grenade launchers and shoulder-fired anti-tank weapons to counter the armoured vehicles used by the Taliban.

The first British elements arrived in Kabul early yesterday morning after flying out from RAF Brize Norton as the first of 3,500 US Marines flew in from Kuwait.

The main task force was due to arrive in the early hours of this morning.

A squadron of 120 SAS soldiers and troops from the Special Forces Support Regiment also landed in Kabul on Friday night. The SAS are linking up with interpreters to secure local intelligence and receive briefings from colleagues and MI6 officers based at the British Embassy. The unit includes a communications team form as well as a bomb disposal team and a small medical team, to be based at the airfield alongside US special operation teams.

While the airfield is surrounded by blast walls within its secure “green zone” it is not being patrolled by Afghan forces and it will be up to British forces to help a small force of Turkish soldiers to repel any Taliban offensive.

The plan involves establishing a series of protection rings around the airport, with the first buffer zone a kilometre away.

Though UK embassy staff and diplomatic personnel who live and work close to the airport will be the first to be evacuated, Afghans seeking to flee under the Afghan Relocation and Assistance Policy will also be asked to gather there.

An 80-strong Royal Military Police unit will join six UK Border Force officials to check documents before allowing them to flee the country.

The second ring, another 1-2 kilometres out, will see members of the Army Pathfinder Regiment provide surveillance for approaching enemy advances.

They will be assisted by a small troop of airborne gunners from 7 Regiment Royal Horse Artillery, who will use locating radar to track and trace any in-bound Taliban fire such as mortars, rockets and artillery.

The third ring will see members of the SAS offering deep surveillance, some 7 kilometres away. They will travel light with instructions not to engage unless fired upon.

British troops will work alongside 3,500 US Marines who are arriving from Kuwait, part of a high-readiness group called Task Force 51, and from the Special Purpose Crisis Force aboard the assault ship USS Iwo Jima.

Last night commanders warned that flights must begin on Tuesday at the latest but there were still logistical issues to resolve. A plan announced by Defence Minister Ben Wallace to use chartered aircraft may fail, sources warned, because the removal of many Covid restrictions means there is a shortage of civilian aircraft and military aircraft may have to be found.

To add to the pressure, Afghanistan’s national carrier Ariana, which operates just five aircraft — a Boeing 757, two 737s and two Airbus A300s — is already struggling to meet demand as pilots and aircrew flee the country.

There is also the question over where evacuees will go.

Last night the Foreign Office was still negotiating with the US authorities to allow the RAF airlift to fly Afghan Entitled Persons to Kuwait, where a reception centre is being built for the 15,000 people they will airlift out of Kabul.

A senior military source said: “We are not a huge force but, of course, all troops have been briefed that they may have to fight and that could be face-to-face in the streets of Kabul.

“Of course, we are hoping it does not come to this. This is going to be a very complex operation in which we are planning to airlift as many as 6,000 people.

“Kabul is currently packed with refugees and ‘The situation is very tense’ – we could have serious issues if we get masses of people trying to join the exodus who do not qualify.

“All this on the background of credible intelligence warnings that the Taliban will use their artillery against the airfield which they captured from the Afghan National Army – this is a real concern. The pressure is on. We must be in a position to begin extractions by Tuesday.”

Members of the Cabinet, including PM Boris Johnson, have been increasingly vocal in their criticism of US President Joe Biden’s “heartbreaking betrayal” of Afghanistan, with his decision to bring forward a planned phased withdrawal of US troops to meet a symbolic September 11 anniversary deadline.

British generals have already made it clear that, without US military and logistical support, the UK’s meagre 2,500-strong training forces could not have stayed.

But last night Gen Lord Dannatt, who headed the British Army between 2006-09, urged Mr Johnson to mount an urgent humanitarian aid operation amid a looming refugee crisis. While Lord Dannatt said he shared the anger of many military veterans who served there at the way the country is being left to its fate, he insisted it is still not too late for the Government to act.

He said: “It is OK to extract our British citizens. What about mounting a humanitarian operation in Kabul to look after some of the refugees, to build some camps, and bring in some humanitarian supplies?

“At least let’s show to the Afghan government we are not completely abandoning them and still stand side-by-side with them. It’s quite possible to do that.

“I think our Government should be thinking about that kind of response. There may come a moment when our last troops have got to go but until that point, let us do what we can to help with the humanitarian crisis, even if we have given up helping on the military side.”