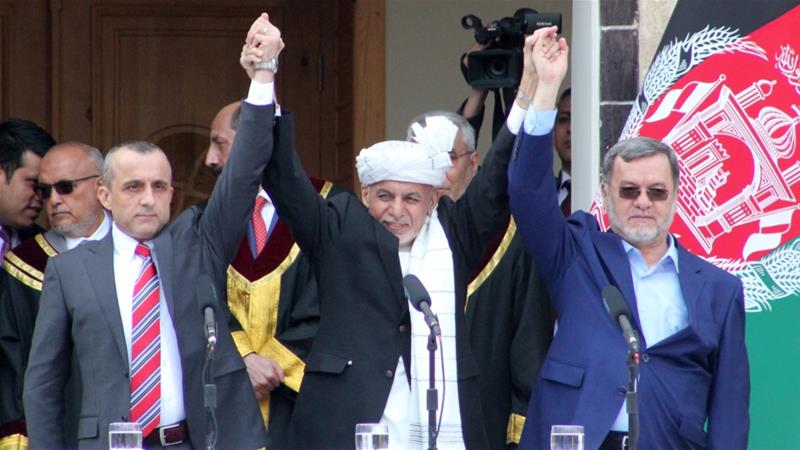 Afghan President Ashraf Ghani was finally inaugurated for a second term on Monday in the capital Kabul nearly six months after the elections that were marred by vote-rigging and record low turnout.

But his main political rival Abdullah Abdullah, who has also declared himself winner citing fraud in September election, organised a parallel swearing-in ceremony throwing the country into a fresh crisis.

The development comes more than a week after the United States signed an agreement with the Taliban armed group, aimed at ending the longest US war.

As part of the pact signed in the Qatari capital Doha on February 29, all Afghan factions, including the Taliban, are expected to sit at the negotiating table to arrive at a peace deal.

Analysts say the political standoff will weaken Kabul’s position during the talks with the Taliban.

Here is what you need to know:

What are Ghani’s next steps?

Ghani seems to have got an upper hand over Abdullah after he was backed by foreign diplomats including US Special Envoy Zalmay Khalilzad and NATO forces commander Scott Miller.

One of his first announcements was the formation of a negotiating team for the intra-Afghan talks which have now been delayed due to the crisis. They were originally expected to be held on Tuesday at an undisclosed location.

In a rebuke to Abdullah, US Secretary of State Mike Pompeo issued a statement saying that Washington “strongly” opposes the creation of a “parallel government and any use of force to resolve political differences”.

The reaction came after Khalilzad failed to convince the two leaders to reach a compromise.

Ghani, who previously refused to honour prisoner swap deal between the US and the Taliban, has now said he was not averse to releasing Taliban prisoners to move the peace process forward.

In his speech on Monday, Ghani promised to announce a decree to free the prisoners.

What are Abdullah’s options?

This was the third presidential election that Abdullah unsuccessfully contested which was marred by fraud allegations.

Abdullah negotiated himself the position of chief executive as part of a power-sharing agreement brokered by the US following the 2014 election. But he hardly got along with Ghani.

He has emerged as one of the most prominent Afghan leaders with a political base sourced from the country’s diverse ethnic groups.

During his inauguration speech, Abdullah also announced his commitment to the peace process.

“The first priority of our government is creating political stability and forming a negotiating team. We are committed to sacrificing to achieve peace and we will not spare self-sacrifice in this case,” Abdullah said.

Analysts say the political bickering will prove to be the main challenge to form an all-inclusive team for intra-Afghan talks.

“Abdullah has the support of key political leaders who can oppose any agenda Ghani is holding in his mind,” Faiz Muhammad Zaland, a political analyst based in Kabul, told Al Jazeera.

“Therefore it will be very difficult for Ghani to go alone with intra-Afghan talks. Secondly, Taliban will not talk to any such team opposed by the rest of political leaders.”

Another analyst said Abdullah’s sidelining does not bode well for the peace process.

“I think the US did not hear Abdullah’s concerns about the elections. The absence of the US diplomats in his inauguration ceremony is a sign that he has been abandoned by the US. Which means he [Abdullah] may challenge the US and Taliban deal,” Mohammad Shafiq Hamdam, former deputy senior adviser to President Ghani and senior adviser to NATO in Afghanistan, told Al Jazeera.

“Let’s not forget that he leads the majority of the leaders and Mujahideen commanders who fought against the Taliban, so his support for the intra-Afghan negotiation is critical.”

Where does the US stand?

The US, on the other hand, announced it was moving ahead with troops pullout even as President Donald Trump earlier said Taliban could possibly seize power in the country.

In a statement released on Monday, US Forces-Afghanistan (USFOR-A) spokesman Colonel Sonny Leggett said the reduction of troops is in line with the US-Afghanistan joint declaration and the US-Taliban deal.

Leggett also said the military has begun its reduction of forces to 8,600 within 135 days and complete withdrawal within 14 months in line with the agreement.

Currently, the US has about 13,000 soldiers in Afghanistan, out of which 8,000 are involved in training and advising Afghan National Security Forces.

“US support for peace in Afghanistan is unwavering, but the Afghan government is divided, weaker and fragile than ever before,” Hamdam, the former Ghani adviser, said.

“I have the feeling that the Afghan government is on the verge of collapse, and the two presidents at the same time can take Afghanistan to a bloody civil war.”