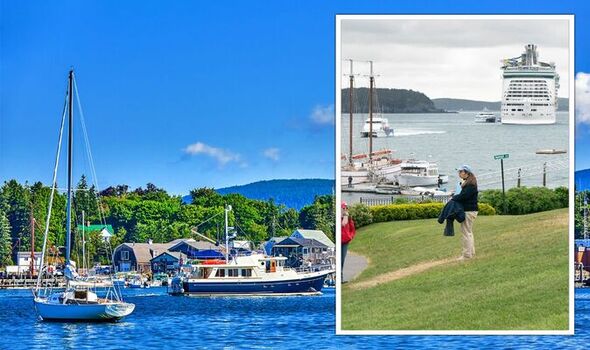 Cruise holidays are extremely popular but some local residents in top destinations are fed up. A leading USA destination has now voted for strict limits on the number of cruise tourists.

From 2024, only one thousand cruise passengers and crew will be allowed to disembark from cruise ships in Bar Harbor, Maine.

Bar Harbor is a popular cruise destination with tourists travelling to sample the town’s lobster and explore surrounding nature.

Following a petition by a local resident, the town will now put strict limits on the number of passengers allowed to disembark.

Charles Sidman, the leader of the petition, said: “There is a vast and deep feeling in the town that we have been overrun by cruise ship traffic.”

In 2021, a survey found that the majority of locals in Bar Harbor were unhappy about the number of ships coming to the town.

Over half of residents said that cruise ship tourism was more of a negative than a positive for the town.

Bar Harbor already had restrictions in place which limited tourists to 3,500 per day in summer and 5,500 during the early and late parts of the cruise season.

The town has around 5,000 permanent residents so would regularly double in size when large ships docked.

Cruise ships that have already booked to visit the town before spring in 2022 will not be affected by any of the new restrictions.

From 2024, only 1,000 passengers and crew will be allowed to disembark from ships in the port.

Some cruise companies with huge mega ships are likely to avoid Bar Harbor altogether and travel to different ports.

Venice has banned large cruise ships from its lagoon and many companies now dock at nearby ports such as Ravenna instead.

Tourists then have to take coaches or trains to Venice if they want to visit the historical Italian city.

Anti-cruise campaigners welcomed the news from Bar Harbor on social media as a victory.

“When the town council wouldn’t listen, they sponsored a ballot initiative and it won with 58 percent of the votes.”

“Congrats to all who worked so hard on this and to the people of Bar Harbor who will benefit.”

Cruise companies have faced pressure around the globe from a number of destinations in recent years.

Barcelona has said it will increase tourist taxes for cruise passengers in a bid to tackle pollution from the ships.

Campaigners in Norway have staged protests in several ports while Marseille in southern France has also been rocked by anti-cruise demonstrations.

Anguilla, a Caribbean island, has said it will keep its cruise ship ban in place to avoid “negative impacts” on the environment.