All aboard the love boat! Traveller’s footage of her trip on the £500m Discovery Princess shows a 16-deck-high glass walkway, wake infinity pool and VERY romantic bedroom decor

Travel writer Jo Kessel filmed her voyage on Princess Cruises’ newest addition to its fleet, Discovery Princess. The footage shows off the ship’s four large pools as well as Jo’s cabin, where she’s treated to an ‘Ultimate Balcony Breakfast’ and dolphins breaching 14 decks below. Plus, she gives the inside scoop on Discovery’s food, drinks (think 24-carat gold margaritas) and entertainment – including the ship’s brand new ‘Deal or No Deal’ game show where guests can win major cash prizes.

When the phenomenally successful 1970s TV drama ‘The Love Boat’ was set on one of their ships, Princess Cruises became a household name.

And even though the series ended 35 years ago, the Love Boat connection remains. But how deep is the liner’s love? I’m keen to find out because, as luck would have it, I’m celebrating a special anniversary with Mr Kessel during the voyage. 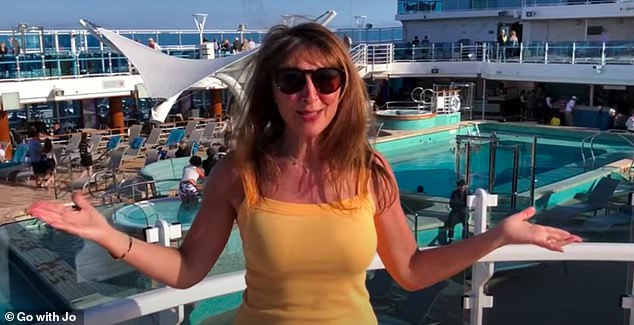 Kessel on a love-boat vessel: Travel writer Jo Kessel filming her voyage on Princess Cruises’ newest addition to its fleet, Discovery Princess, on her first-ever sailing 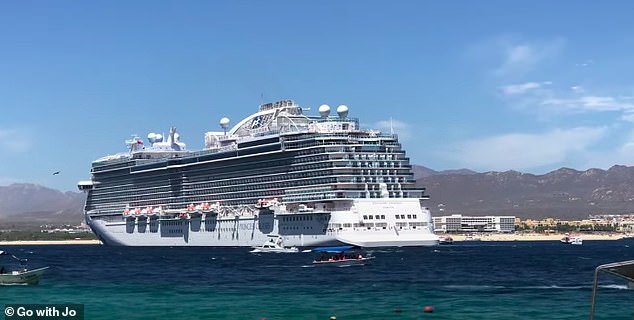 When the 1970s TV drama ‘The Love Boat’ was set on one of its ships, Princess Cruises became a household name, and The Love Boat connection remains today, Jo reveals. ‘But how deep is the liner’s love? I’m keen to find out,’ she says as she boards the Discovery Princess (pictured)

The £500million ($654million) Discovery Princess is the 15th ship to join Princess Cruises’ fleet and is the last of the liner’s six ‘Royal-Class’ ships – the first being Royal Princess, christened by its godmother, the Duchess of Cambridge in 2013.

When I joined the 3,660-passenger Discovery for its first-ever sailing, a seven-night voyage from Los Angeles to Mexico, I hoped to capture what makes this a ship fit for royalty.

The video starts where the action is to be found at the start of any voyage – the ‘sail away’ – top deck!

There are four pools in total on Discovery Princess – each larger and with more spruced-up seating areas than on any of Discovery’s sister ships, according to Jo. Above is the Sky Pool 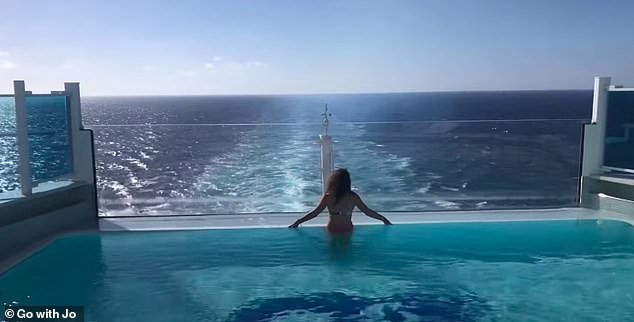 Describing the ship’s infinity pool, Jo says: ‘It overlooks the wake and you can waft in it for hours, ogling the view’ 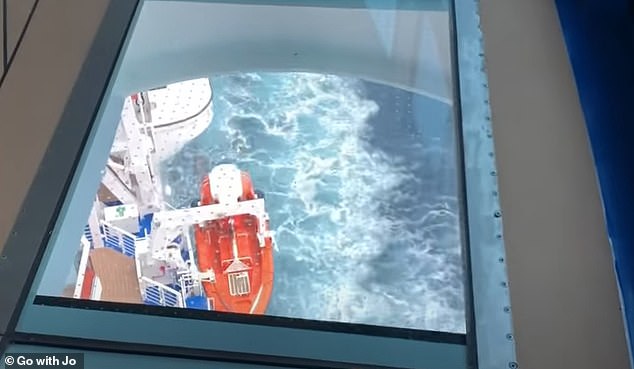 The 16-deck-high ‘scary’ glass walkway, with the sea churning away below

And this being Discovery’s first-ever sail away meant it was extra special. Crowds gathered to whistle, wave and whoop and the ship’s horn tooted the Love Boat theme tune as Discovery sailed away from the port.

Top decks are also about the pools. There are four in total – each larger and with more spruced-up seating areas than on any of Discovery’s sister ships.

Our favourite is the infinity pool at the back. It overlooks the wake and you can waft in it for hours, ogling the view. 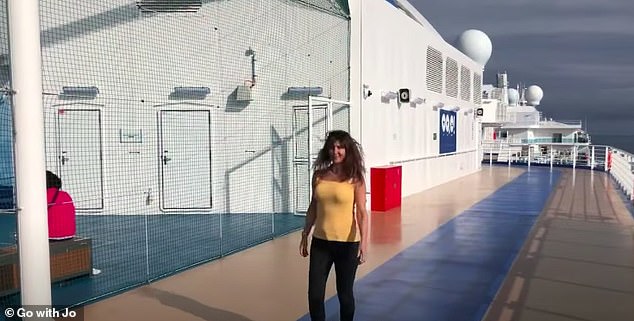 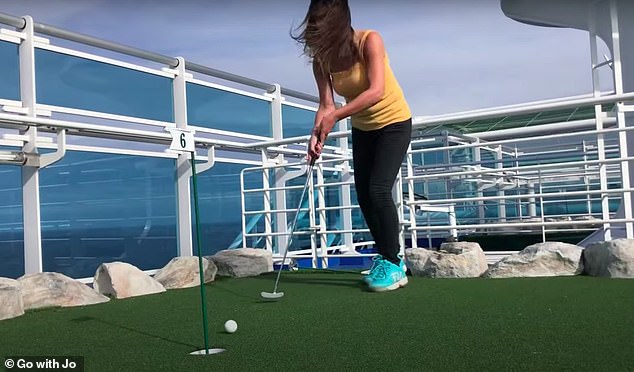 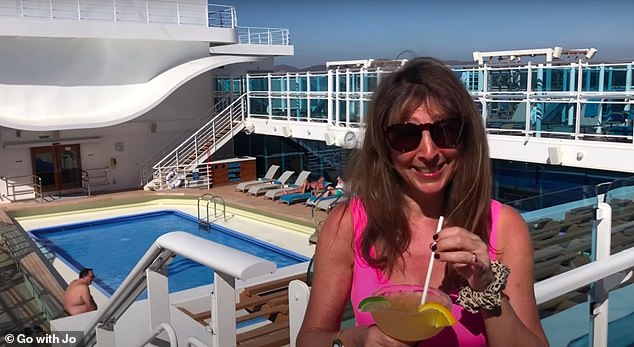 A bartender whips up a ’24-carat-gold’ margarita, laced with tequila, Cointreau and Grand Marnier. Jo describes it as ‘both sensational and sensationally strong’

The film reveals what’s on offer for those keen on activities, too, showcasing Discovery’s jogging track, sports court and mini-golf course.

Talking of which – in keeping with this being a maiden voyage, I manage a highly atypical maiden hole-in-one just when the camera happens to be rolling.

This calls for a celebration cocktail – a 24-carat-gold margarita that’s also laced with tequila, Cointreau and Grand Marnier. It’s both sensational and sensationally strong.

Jo shows off the ‘Medallion’ – a 10p-sized wearable disc that performs multiple functions, such as opening cabin doors and paying for onboard purchases 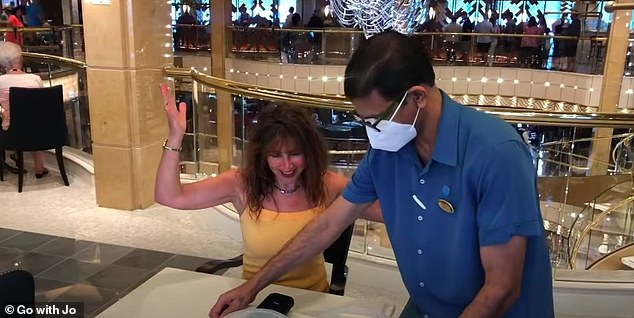 A waiter brings Jo her order of a Greek salad as she sits in the three-tier ‘Piazza’, having conveniently traced her whereabouts using the Medallion’s tracking system

A couple of years ago Princess pioneered the touchless ‘Medallion’ technology – a 10p-sized disc worn as the pendant on a necklace or a wristband that performs multiple functions such as opening cabin doors and paying for onboard purchases.

But Princess has just taken this technology to the next level.

For the first time ever this Medallion can now be used to pay for things off the ship too, demonstrated in the footage when I buy a box of chocolates at a shop in our last Mexican port of call, Puerto Vallarta.

Jo relaxes with a book on the balcony of her cabin. ‘Discovery Princess is a beautiful and exciting new vessel on which to explore the world,’ she says

This is great news for passengers averse to carrying cash or cards on their person when out and about. Their Medallion’s all they’ll need.

Afterwards, I put another Medallion function to the test. We’re told that these discs enable the crew to track our movements.

So we order Greek salads on one side of the ship and then go walkabout to see if we can be found.

Eventually, we plant ourselves at a table in the sparkly three-tier Piazza and moments later a waiter approaches carrying a tray with our lunch. Eureka! 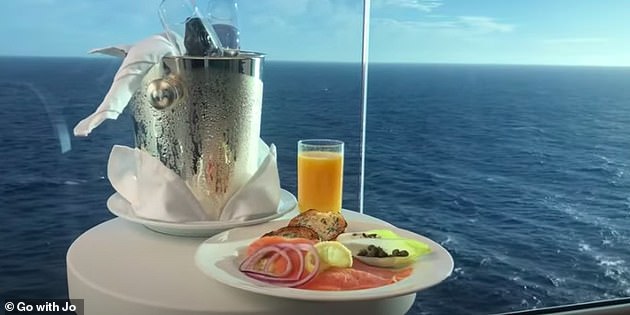 ‘On the day of our wedding anniversary, we order an “Ultimate Balcony Breakfast” (pictured),’ says Jo 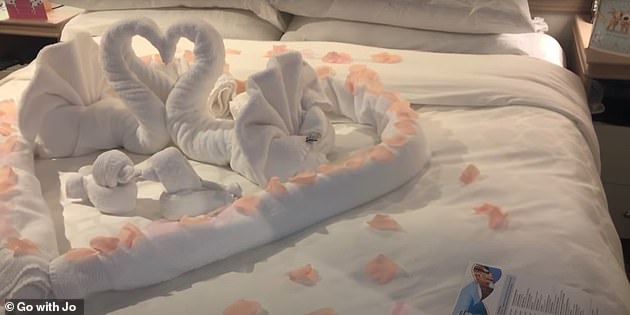 Talking of food – the cuisine in the main dining room is excellent home-style cooking with a gourmet twist, think bacon-wrapped meatloaf and apple pie. But our top picks in the speciality restaurants are Crown Grill steakhouse’s filet mignon and the Sole Piccata (with white wine, capers and butter) served in Italian Sabatini’s.

If you’re celebrating a special occasion you might fancy a meal in the cabin. And on the day of our wedding anniversary, we order an ‘Ultimate Balcony Breakfast’. What comes is a feast of smoked salmon bagels, quiches and fruit platters – plus a bottle of bubbles.

Better still, as we’re tucking in we spot a pod of dolphins frolicking 14 decks below. 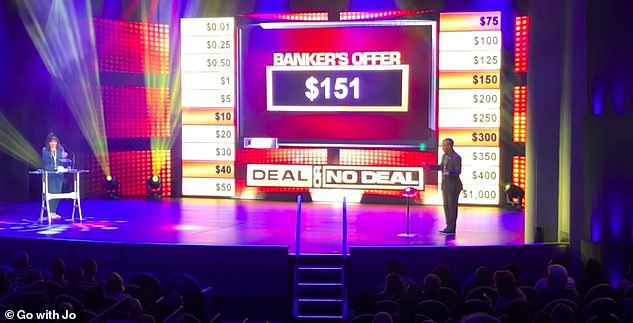 ‘The video finishes as all good holidays should, with a spot of relaxation, showing the best places to chill on board,’ says Jo 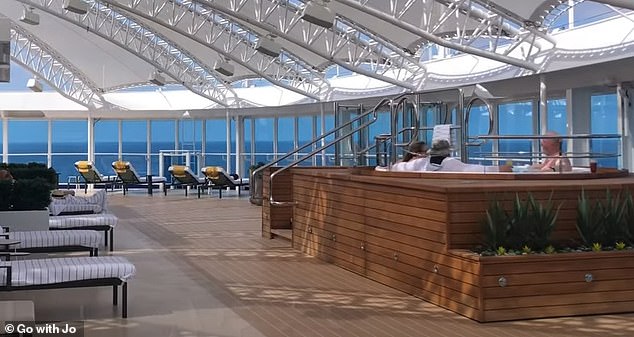 The ship can accommodate 3,660 guests and there are 1,346 international crew members onboard

Discovery Princess will be on the Californian Coast and Mexico for winter 2022.

A seven-night Mexican Riviera voyage in a balcony cabin on Discovery Princess costs £699pp, departing from Los Angeles on November 26, 2022.

They look tiny from on high, but I managed to capture one on film.

Nearly as exciting is how the steward decorates our bed ‘Love Boat’ style that night.

The display of petals, love hearts and love swans is so beautiful that it’s a shame to mess it up!

Finally, we take a look at Discovery’s entertainment, from its jazz bar to its poolside Movies Under the Stars (an outdoor cinema with unlimited popcorn) to its brand new ‘Deal or No Deal’ game show, which has a cash prize of £765 ($1,000) waiting to be won by an audience member.

And the video finishes as all good holidays should, with a spot of relaxation, showing the best places to chill on board.

Discovery Princess is a beautiful and exciting new vessel on which to explore the world. Crucially, is it a Love Boat? You bet.

For more videos from Jo, visit her YouTube channel – Go with Jo. 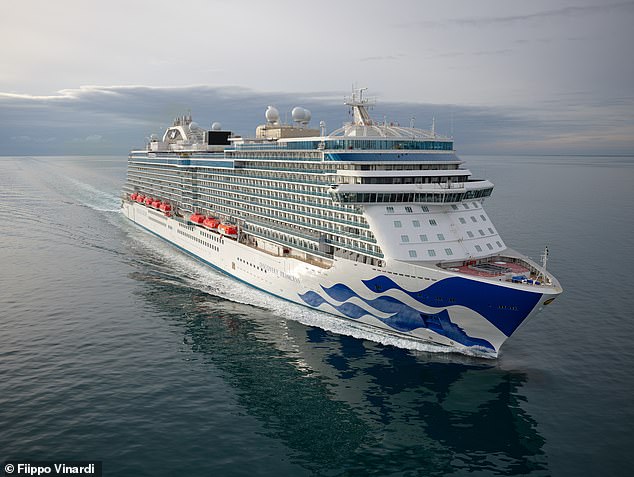 Discovery Princess, built at the Fincantieri shipyard in Italy, made her debut earlier this year 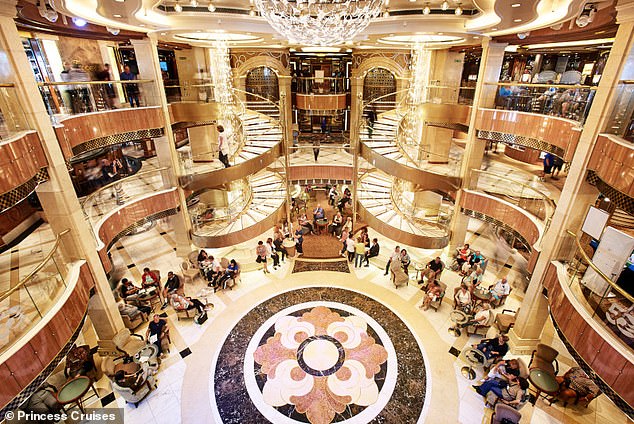 The £500million ($654million) Discovery Princess is the 15th ship to join Princess Cruises’ fleet. Above is the ‘Piazza’

DISCOVERY PRINCESS BY THE NUMBERS

Guests can explore 19 decks and 1,482 of the ship’s 1,830 cabins have balconies. The ship can accommodate 3,660 guests and there are 1,346 international crew members onboard.