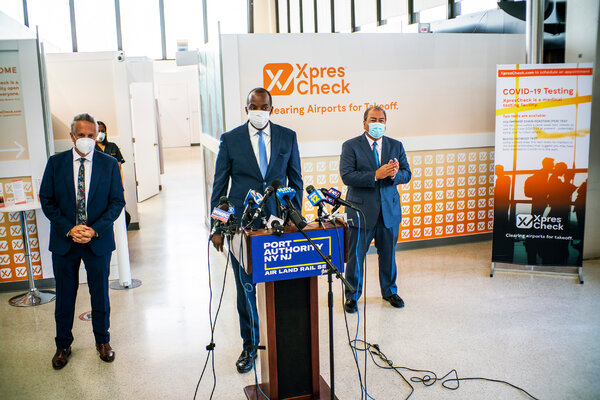 Until recently, XpresSpa was known for offering manicures, pedicures, massages and waxing services at 25 airports in the United States and around the world, where travelers with some time between flights could get themselves spruced up.

But on Wednesday, the company began offering a rapid molecular coronavirus test, manufactured by Abbott Laboratories, that will return results within 13 minutes at Kennedy International and Newark Liberty International airports under the name XpresCheck.

“We believe rapid Covid-19 testing at airports can play a major role in slowing the virus spread and decreasing the risk of new community outbreaks linked to travel as cases continue to rise throughout many states,” said Doug Satzman, chief executive of XpresSpa Group, in a statement.

The company’s move comes as the number of people flying remains low — on Tuesday the Transportation Security Administration screened about 590,000 people, compared with more than two million on the same date in 2019 — whether out of fear of air travel or because the 14-day quarantine requirements in some states make travel unattractive.

In recent weeks, airlines including United, Hawaiian Airlines and JetBlue, as well as airports, said they would begin offering coronavirus tests; with a negative test often meaning that the traveler can skip quarantine at their destination. As the travel industry grapples with how to get people traveling again, testing at the airport presents an opportunity to put people at ease about getting on a plane. No airline in the United States has suggested that it will require a negative test before boarding.