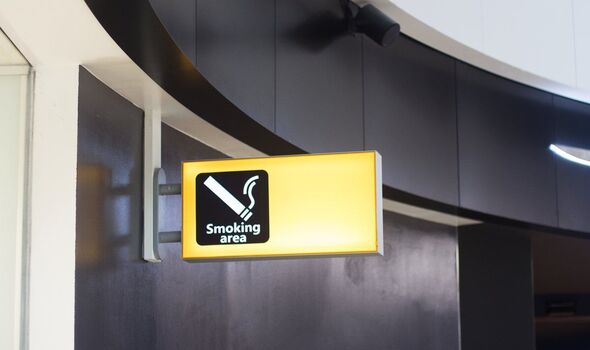 And even vape users aren’t spared, as these restrictions extend to e-cigarettes too.

This means nicotine users could be forced to go without for several hours prior to take-off – potentially longer if there’s a delay – in addition to the time spent in the air.

And while many overseas airports do have indoor smoking areas, vape users often have no choice but to vape in the same area as tobacco users.

This might explain why uncertainty over what the smoking policy will be post-airport security is a worry for almost half (44 percent) of nicotine users.

To alleviate such confusion, VELO, the brand behind tobacco-free nicotine pouches, has created an interactive map detailing the smoking policies of many domestic and international airports.

A spokesman said: “Travelling can be very gruelling – there’s so much to think about, whether that’s packing, parking, flight times, insurance, and lots more.

“And tobacco and vape users have an added layer of complication – especially when flying, as airport smoking and vaping restrictions can vary airport to airport.

“And while many airports overseas do have smoking areas, they are becoming less and less common – with many countries operating a complete ban once you get through security.”

In addition to developing the map, the nicotine pouch makers commissioned research of 1,000 nicotine users, aged 20 plus, who have been using nicotine for six months or more.

The study found 28 percent tend to plan their journey around where and when they’ll be able to use nicotine products.

And nearly two-thirds (63 percent) of smokers and vapers admit they feel anxious about not being able to consume nicotine using their preferred method when flying.

As such, 28 percent of all those polled have avoided travelling by plane – opting instead to travel by what they perceive to be more tobacco- or vape-friendly forms of transport.

It also emerged nearly half (47 percent) have travelled by plane since airports and airlines introduced smoking and vaping restrictions.

And of those who have done so, 71 percent have been in an airport smoking lounge.

For the most part, their experience hasn’t been positive – with 59 percent saying they have a “negative opinion” of the lounges in general.

Their gripes include little or no air circulation or ventilation (46 percent), lack of space (37 percent), and bad odours (32 percent).

Almost a fifth (18 percent) also find the location of the designated areas to be a frustration – believing they tend to be a considerable distance from where they need to be.

So perhaps it’s no surprise that 20 percent of those polled avoid the smoking lounges completely or as much as possible.

But while airport smoking policies are confusing or irritating for some, the study, carried out through OnePoll, found 55 percent have never tried alternative nicotine products.

The VELO spokesman added: “Airports have many restrictions – and for good reason – but they do make this form of travel arguably the most complex.

“So hopefully our map will go some way to simplifying air travel for nicotine users.”

Record producer DJ S.K.T, and fashion model Ianthe Rose, are both nicotine users who have travelled the globe extensively – here are their top tips for making travel easier.