The airport said in a statement on Twitter: “Following today’s high temperatures, a surface defect was identified on the runway. Engineers were called immediately to site and repair works are currently in progress to resume operations as soon as possible.”

It comes as the RAF halted all flights to its largest air base in the UK after the runway reportedly “melted” in the hot weather.

A second source confirmed to Sky News the runway had been impacted by the heat but didn’t say it had “melted”.

The heat has also caused rail tracks to buckle at Vauxhall railway station in London.

There was then disruption between Waterloo and Clapham Junction after a safety inspection was conducted on the line. 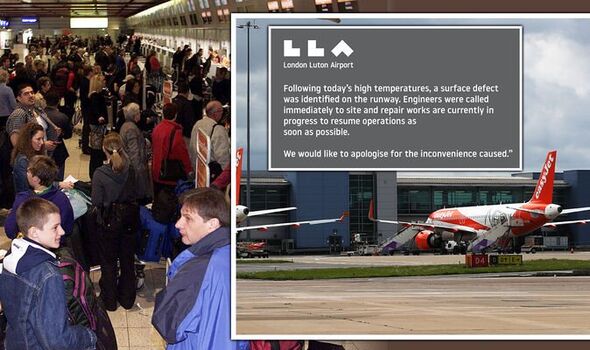 Rail services were then suspended between Cambridge and Kings Lynn.

Those with cancelled flights from Luton Airport today are entitled to a full refund.

DON’T MISS
Flight attendant tells what to ‘never, ever consume’ on a plane [INSIGHT]
Flight attendant shares what passengers ‘should never drink’ on plane [UPDATE]
RAF halts all fights to UK air base a ‘runway has melted’ [ANALYSIS]

She said: “This is incredibly frustrating for travellers hoping to get away today.

“If your flight is cancelled you should be asked whether you want a full refund or to re-book on an alternative flight.

“The airlines should be covering the cost of transport if you need to travel from a different airport to catch your replacement flight.

“You may also be entitled to financial compensation if you’re delayed two or more hours by the replacement flight offered.

“If your flight is cancelled you might be able to claim compensation – the amount will depend on the distance of your flight.”