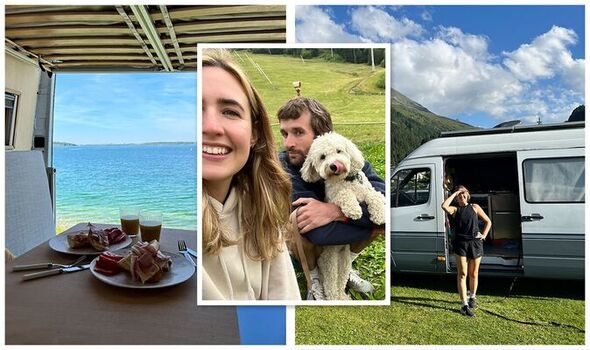 When the lockdown rules of the Covid pandemic began to ease, Pippa Nixon (@littlemcrhouse) and her boyfriend Benn dreamed of a big holiday but didn’t want to leave their dog Mags behind. So, the couple decided to take on a major DIY challenge and transform a campervan into their dream travelling holiday home.

“Both me and my boyfriend Benn love to travel,” Pippa, who heads up Scoop PR, told Express.co.uk. “During lockdown, we saw loads of people converting vans into campervans and we chatted about how cool it would be to do it ourselves.

“After not travelling as much during the pandemic, we decided we wanted to take a big holiday in 2022, but we have a dog and we felt it was a big ask to leave her with someone for over three weeks. We realised if we converted a van we could just take her with us and that what we spent on the van we’d save on accommodation costs.”

It was a chance sighting, while out for a run, that Benn stumbled upon the ideal campervan for the job. “The van was in a state of disrepair, so he left a note for the owner asking if he could buy it,” Pippa explained.

Before the couple could get to work with the aesthetic details, there were some big challenges hidden beneath the bonnet – including covering the cost of a new engine.

It’s for this reason that Pippa says it’s vital you find the right van to begin with.

“It’s going to take a lot of time and money to convert it, so this bit is very important.

“Look for a clean and tidy van that’s been looked after if you’re going second hand. If you’re not a mechanic then try to get some advice from one, as it can be a minefield.

“Luckily Benn used to be a mechanic so he dealt with that, and the copious amounts of rust on the body of the van,” Pippa said.

While Benn worked on the technical side of the van, Pippa began researching and planning with the help of Youtube, where other ‘vanlife’ creators had documented their journeys online.

“The hardest part was probably making the decisions on where everything should be,” Pippa explained.

“The van has to be totally planned out so that you know where to run wires, any plumbing, where you need to drill into etcetera – it’s actually really tough knowing all that before you start.

“You’re effectively building a tiny little house in a really small space so the more effectively you plan it, research materials and really use other people’s experiences, the more chance you have of getting it right the first time.”

As part of their plans, the DIY duo factored in a gas heater, hot water system and even solar panels so the van has electricity no matter where they pitch up.

Along the way, they stumbled into a few small electrical problems which they had to figure out. But as well as a couple of challenges, there were some parts of the renovation that were a breeze.

Pippa said: “The easiest part was probably laying the floor, it’s LVT and it has a click-lock system so it went down super quickly and transformed the look of the van.”

It’s details like this that create a “homey” feel while on the road. “A comfy bed was an absolute must for us, we actually have a better mattress in the van than we do at home, I don’t think we have ever slept so well,” Pippa said.

“Having the dog with us also made the van feel like home. We have a couple of bench seats with cushions so in the evenings if it was cool outside we would curl up on those and either read a book or watch Netflix, with a candle lit and Mags snoozing away.”

Although the couple admits there are still some additional jobs to be done, they completed the vast majority of their transformation in just five months.

“It’s got all the essentials in there now, but it’s not finished yet, so we’ll be back at it early next year,” Pippa added.