After more than a decade of piecing together adjoining parcels and a voter referendum, big plans for converting a section of the Miami riverfront into an entertainment district are underway. Work is scheduled to start this year on Riverside Wharf, a $185 million, 1.5-acre, two-tower development slated to open in 2025 that will include a 165-key Dream Hotel, a half-dozen dining and nightlife venues and a private marina. The site, co-developed by Alex Mantecon and Emi Guerra, includes Wharf Miami, an event space that includes a collection of vendors and regularly hosts pop-up businesses, and neighboring parcels cobbled together through multiple transactions beginning in 2010. Miami voters approved the redevelopment of the industrial area as an entertainment and hospitality district in 2016. Travel Weekly hotels editor Tovin Lapan recently spoke with Mantecon about the project. 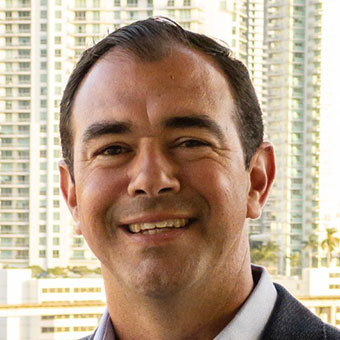 Q: What about this area in Miami caught your eye as a development opportunity?

A: If you think about this section of the Miami River, it’s sandwiched between the two most dense neighborhoods in the state of Florida. You have Brickell and you have Downtown, and the river is basically what divides these two. And it’s a shame the river has never been truly developed, it’s always been an afterthought.

The river still retains its working character, but you don’t want to have your industrial uses inside your events areas of the city from an urban planning standpoint. So the industrial uses will stay in the middle and upper portions of the river, and we are in the lower-river area. The vision here is for it to become a location with a lot of walkability and a lot of entertainment and dining options.

Q: Why was Dream Hotel Group the right partner for this project?

A: It really has to do with the overall vision of the project which has always been about best-in-class entertainment and dining. And we don’t mean best-in-class as in the most expensive and flashy the way Miami is. We mean best-in-class simply as just the best. And condominiums and offices don’t really mesh as well with restaurants, bars and nightclubs, so a hotel was a natural choice in order to bring some density to the neighborhood — to give the restaurants a better crowd.

So we started looking around at all the different hotel brands that exist and we came across Dream, which is just one of those last independently owned boutique lifestyle brands that really fit in with what we were trying to achieve …. They also have a very strong creative backbone with great offerings at every single one of their destination hotels.

Q: What details can you share about the two towers?

A: It’s two separate buildings, but it will all look like one building. What we’re trying to do is make sure that noise is not an issue at the hotel, so we have all the entertainment, food and beverage in one building and the hotel next door.

From a programming standpoint, what is now Wharf Miami will occupy the ground floor across the two buildings. The hotel’s main lobby and some amenities will be on the second floor, and the hotel will have a rooftop pool.

The other building will be the main food and beverage and entertainment site, with Wharf Miami on the ground floor and restaurants on the second floor. The floors are being built to double-height, so 28-foot ceilings with a spacious, airy feeling and balconies overhanging the water. Then, above that, there will be a ballroom for events like weddings and parties. Then there will be a nightclub and a rooftop day club.

Q: Are there plans to connect to the area’s past?

A: We plan to keep Garcia’s Fish Market on the ground floor. There’s a lot of history and nostalgia with that place that was on the site for the last 50 to 60 years, a real commercial fishing operation up until a few months ago. We’ll have the fish market, fishermen can come by and offload their catch, and it will be accessible to the public but also feed into the different food and beverage establishments.