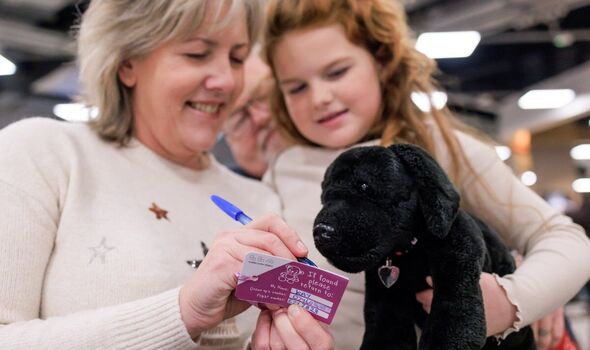 Just under half of parents (49 percent), of children aged up to nine years old, have had a beloved teddy, blanket, or toy go missing whilst in transit, according to a poll of 800 mums and dads.

And seven in ten of those polled would do whatever it takes to retrieve the lost cuddly toy.

But now, London Luton Airport has stepped up to help – with special “teddy tags” where parents can record the toy’s name, flight number, and the owner’s contact details, so children can quickly be “reuni-TED” with their cuddly friends.

Clare Armstrong, head of guest experience at London Luton Airport, said: “We understand that travelling during the Christmas period can be a taxing time for parents, and losing a child’s toy can cause real upset.

“This year alone, we have collected approximately 200 toys, comforters, and teddies that have been left behind by families – and whilst we have happily been able to reunite some of these toys with their owners, it is always a difficult process.

“The Teddy Tag system means that it is now easier to reunite children with their favourite toys, taking the stress out of the process should a teddy get misplaced on the journey.”

The scheme launched on December 19th, and Teddy Tags will be available to collect for free at check-in and information desks, as well as wider security gates, as part of the airport’s family-friendly offering.

It is also hosting a toy reunion page on its website, with images of unclaimed teddies and toys alongside information about where they were found, and how passengers can arrange to have them sent home.

For parents of kids who have a favourite children’s toy or comforter, 86 percent agree that making sure the cherished item is packed is one of the top priorities when travelling.

Keeping children and family members entertained was considered the biggest challenge of family travel, and almost half of parents (45 percent) rely on treasured toys and comforters to keep the kids happy while on the move.

And when it is discovered that a toy has gone AWOL, 47 percent are willing to canvas the area, asking strangers if they have spotted the lost item.

Failing that, one in three (32 percent) would create a post on social media to get the word out – and 35 percent would go as far as to get the police involved.

Of those parents of children who have lost a toy or comforter in-transit, 52 percent admitted the absence of the item impacted their holiday in a negative way.

Although a crafty 44 percent polled, via OnePoll, were able to replace the item with a new version – without their child noticing the difference.

Jo Christie, 33, whose seven-year-old daughter Meilia lost her teddy, Kaydog, recently during a family holiday, said: “I love the idea of the Teddy Tags and the airport’s commitment to returning lost toys.

“It really is a nightmare for parents to lose a cherished family toy at any time of year, but especially at Christmas when the pressure is on for everything to be perfect.

“Kaydog represents our real dog that sadly passed away. The ashes are actually inside the locket around Kaydog’s neck, so she’s extra special to my little girl.

“We will definitely be picking up a Teddy Tag for Kaydog next time we travel, as she does seem to have a habit of getting lost.”