Carl Tuch, an electrical engineer, woke up on Labor Day, grabbed his two suitcases and hopped on a 6 a.m. flight from Syracuse to Las Vegas ready to gamble.

His son, Alex Tuch, a right wing on the Vegas Golden Knights, was the one with the hot hand. He had scored eight goals over the previous month en route to the Western Conference finals in Edmonton, Alberta.

A father who built and maintained an ice rink in his backyard for 18 straight winters, Carl Tuch set up a 150-inch projector screen behind their summerhouse on Wellesley Island, N.Y., a mile from the Canadian border, in July, just before the N.H.L. restarted its season in two contained environments in Canada. With the league not allowing any fans at games, he chafed at not being in the arena, and figured his backyard screen was the next best thing.

But when Alex Tuch, 24, told him that parents of players might be allowed to watch the Stanley Cup finals in person, his father flew west immediately and commenced seven days of quarantine at his son’s house. There was no guarantee that the Golden Knights, the top seeded team in the West, would advance that far, or even that Carl Tuch would be allowed to continue north, because of Canada’s ban on most Americans entering the country.

But if Vegas won and Canada welcomed them, a group of parents would fly to Edmonton, Alberta on a plane chartered by the team. As he waited, Tuch drank his son’s Woodford Reserve bourbon, watched him score a ninth goal against the Dallas Stars and underwent daily throat swabs to test for Covid-19.

“I haven’t seen him since February,” Tuch said of his son. “Longest I’ve gone without seeing him in his life. I’ve got my fingers crossed.” 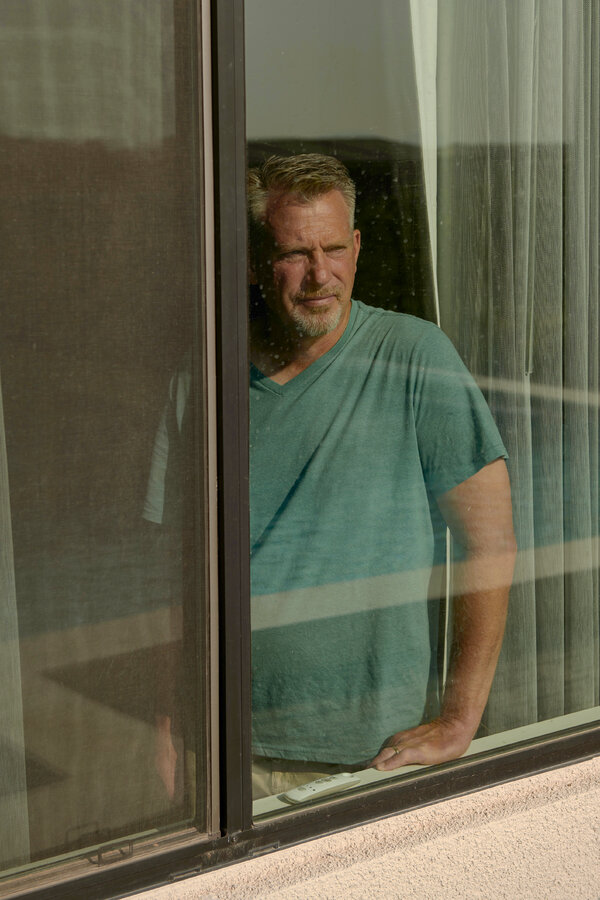 Parents of athletes are weighing a number of risks amid the pandemic. Barred from most venues as sports have restarted, they are looking for loopholes and last-minute flights in hopes of cheering their children in person instead of through television broadcasts and live streams. Accustomed to watching among large crowds, some are instead waking up neighbors while celebrating during game watches in backyards.

When Mets pitcher David Peterson learned of his promotion to the big leagues in July, he called his mother, Shannon, who lives in Denver, to tell her he would soon be making his first Major League Baseball start at Fenway Park. The two celebrated 1,800 miles apart.

“It’s a complete split of, ‘Oh, my gosh, this is everything that he’s wanted, I couldn’t be happier for him,’” she said, “and simultaneously my heart is breaking because all I want to do is be there to support him.”

When their call ended, she dialed his agent, Mark O’Brien.

“‘All right, so what are the chances we can get some sort of an exception?’” she recalled asking. “Mark’s like, ‘Yeah, good luck with that.’”

She flashed back to the sight of her young son wearing a diaper, holding a glove on the wrong hand and declaring his desire to play in the majors.

“Well, you better get practicing, buddy,” she told him then.

He ran outside to practice, and she often joined him. When Peterson was 9, his father, Doug, died of an accidental drug overdose, and his mother assumed the role of playing catch with her son. She traveled with him across the country to games, from California to Cooperstown, N.Y. They talked about his eventual debut as he made his way through the minors, but neither envisioned her sitting in the family room watching the game by herself, too nervous to watch with others.

After he negotiated his way through five and two-thirds innings on July 28, getting out of a bases-loaded jam en route to earning the win, she watched him leave the mound and sent him a text message.

She figured he would not call that night, but he did on the way to the team bus. She was in bed.

“My heart was very, very full,” she said.

Chris Olsen, 68, knows the routine. His son, Greg Olsen, 35, has logged 190 career games as a tight end in the N.F.L., and is now in his 14th season. Chris Olsen coached his son at Wayne Hills High in New Jersey, and after retiring from that job in 2013 he followed his son south to North Carolina, where he was with the Panthers.

Chris Olsen knew his son’s time as a player was short when the Panthers released him in January, and helped him settle in to his new place outside Seattle over the summer. He plotted his year around the Seahawks’ schedule, and planned to attend nine or 10 games, including Seattle’s opener in Atlanta before flying west for two games in Seattle.

But then the Falcons announced they would not have fans in their domed stadium through September, and the Seahawks decided they would not host fans at CenturyLink Stadium at least through their first three home games.

“I went from sitting on the 50-yard-line to buying N.F.L. Sunday Ticket,” Chris Olsen said. “I was looking forward to the meals together on the road.”

Andrea Walker has always been a favorite of television producers when her son Kemba, 30, plays. As he grew up, she catered to his every need, including bringing him oxtails from her housing project in the Bronx to his dorm room when he played at the University of Connecticut. During his N.C.A.A. title run in 2011, no highlight of his step-back exploits was complete without a quick shot of her gyrating in the stands.

When the Charlotte Hornets drafted him, and he bought her a house 25 minutes away from his. When he left for Boston last summer after eight seasons with the Hornets, she stayed behind but was back in Charlotte’s arena in November, standing behind the Celtics’ bench and wearing her son’s No. 8 Celtics jersey with “MAMA WALKER” stitched on the back.

But she was left to watch games on her screened-in porch down in South Carolina when the Celtics resumed their season this summer. She dubbed it her “She Shack” and wondered what neighbors must think of her screams during late-evening games.

Then, the N.B.A. announced families could enter its bubble after the first round of the playoffs. To meet up with a Celtics contingent, she flew to Boston, then button-hooked down to the N.B.A.’s campus in Florida with Jayson Tatum’s and Jaylen Brown’s family members on a private plane last Tuesday. They still had to quarantine for seven days as the Celtics’ series against the Raptors stretched to seven games.

The night before Game 7, Kemba Walker called his mother on FaceTime.

She watched from her hotel room in Florida, with a security guard stationed in the hallway outside her door. When Boston won, the players’ family members opened their doors — still abiding by protocol rules that mandated they not step into the hallway — and screamed.

“I felt sorry for the security man,” Andrea Walker said. “He got it from all of us!”

It has been a quieter start to the school year along the Hudson River. Ana Oglivie traveled far from her home in Kapolei, Hawaii, to attend West Point and play volleyball. When she was a plebe, her father, Septimus Jr., who travels throughout the mainland in his work for World Wide Technology, happened to be in Washington, D.C. at an opportune time, so he drove up to her first volleyball game at Bucknell as a surprise.

Her parents have largely been relegated to long-distance viewing via livestream the last four years, waking up as early as 3 a.m. to watch her play. But they did host the team last fall when the Cadets had a tournament at the University of Hawaii. After the final game, Oglivie’s mother, Helene Oglivie, a professional hula dancer, taught the team her moves.

Mother lets daughter know that she has been watching by sending her screen shots of her strikes following games. But there was a new form of family fandom awaiting the Army players when they arrived at the Gillis Field House for their first scrimmage of the season.

The players’ parents had arranged for cardboard cutouts of themselves to appear in the otherwise empty stands. After the match, Oglivie returned to her barrack, where she found out via a text from her brother that their mother had run into his room to show him a clip of her playing.

Back in Las Vegas, Carl Tuch’s bet did not pay off. The Golden Knights fell to the Dallas Stars in five games, preventing him from seeing his son play live.

But the family is already planning its next hockey event. Alex Tuch’s mother, Sharon, did not go to Vegas because the couple has twins who started college this semester, and she wanted to be available for them: Leah is at SUNY Oswego, and Luke is a freshman at Boston University, where he started hockey practice last week.

Luke is expected to be selected in the second round of the N.H.L. draft, which will be conducted in early October. The family is contemplating how they can be together, whether Luke flies home for the occasion or the parents travel to Boston. Either way, Carl intends on watching Luke play college hockey this winter.