The Los Angeles County sheriff will hold a news conference Wednesday morning to discuss findings from February’s single-vehicle crash involving Tiger Woods, which will include “causal factors and collision report,” according to the release announcing the news conference.

Last month, the sheriff said the investigation into the crash was complete, but that details could not be released until Woods gave permission because of privacy restrictions.

“A cause has been determined,” Sheriff Alex Villanueva said on a Facebook livestream, adding: “We have all the contents of the black box. We’ve got everything completed, signed, sealed and delivered. However, we can’t release it without the permission of the people involved in the collision.”

It is unclear what has changed, if anything, or how much detail the sheriff will give.

Woods, 45, sustained severe injuries to his right leg on Feb. 23, requiring at least two operations after the sport-utility vehicle he was driving crashed onto a hillside along a tricky stretch of road in Los Angeles County. No one but Woods, the pre-eminent figure in golf over the past quarter-century, was involved, according to the authorities.

The sheriff has maintained that the crash was an accident, saying that he and his deputies did not detect signs of impairment at the scene that day. However, he said about a week later that investigators had gotten a search warrant for the event data recorder, also known as a black box, in Woods’s S.U.V. to help clarify the cause of the crash.

“It’s still an accident,” he said last Wednesday. “You have an accident, and you have deliberate acts. It’s an accident, OK. We’re reaching out to Tiger Woods to be able to release the report itself, and nothing has changed from what we know and what we learned throughout the course of the investigation. And everything we did turned out to be accurate.”

Here is what we know as of Wednesday morning:

What happened during the crash?

Officers arrived at the scene six minutes after receiving a 911 call and found Woods trapped in an S.U.V. that had rolled over, Sheriff Villanueva said on the day of the crash.

The vehicle Woods was driving hit the median strip, traveled several hundred feet and rolled several times before stopping in the brush on the other side of the road, Sheriff Villanueva said. There were no skid or swerve marks, indicating that Woods had made no attempt to brake, the sheriff said. The bumper and the front end of the car were “destroyed,” but the interior cabin of the vehicle was “more or less intact,” he added.

There was no evidence that Woods was being followed or looking at his phone, the sheriff said at the time of the crash. Weather was also not a factor in the crash, he said. Woods was wearing his seatbelt, and airbags in the car deployed, Deputy Gonzalez said.

What injuries was Woods treated for?

Woods was taken to Harbor-U.C.L.A. Medical Center in Los Angeles on the day of the crash and underwent emergency surgery to repair serious injuries to his right leg.

He was transferred to Cedars-Sinai Medical Center in Los Angeles on the evening of Feb. 25. The morning after Woods’s arrival at Cedars-Sinai, he received “follow-up procedures on his injuries,” which were deemed successful, according to a statement from Woods’s Twitter account.

Dr. Anish Mahajan, the acting chief executive of Harbor-U.C.L.A., said in a statement the night after the crash that both bones in Woods’s lower right leg, the tibia and the fibula, had been broken in multiple places and were “open fractures,” meaning the bones had pierced his skin.

Dr. Mahajan said doctors had “stabilized” the breaks by placing a rod in the tibia. He said that additional bones in Woods’s ankle and foot had also been injured and that they had been “stabilized with a combination of screws and pins.”

The statement did not describe any injuries to Woods’s left leg, though Daryl L. Osby, the Los Angeles County fire chief, had said earlier that Woods had “serious injuries” to both legs. The chief did not explain further and said he was not sure what other injuries Woods might have sustained.

Woods was released from the hospital last month.

Doctors not involved in Woods’s care have predicted an extremely difficult recovery from his injuries.

How did the investigation proceed?

The warrant to inspect the black box’s data was executed on March 1 as part of a “routine procedure,” a spokeswoman for the Sheriff’s Department said last month.

When asked why the department had not sought a warrant for blood samples from the hospital, which would indicate whether Woods had alcohol or drugs in his system, Sheriff Villanueva said in a livestream on March 3 that there was no evidence of impairment.

“Absent the evidence of impairment, you know, you’re not going to get a search warrant,” the sheriff said. “Period. It’s not getting assigned by the judge.”

Though the investigation continued, Sheriff Villanueva was quite clear at a news conference on Feb. 24 that he believed the crash was accidental. “We don’t contemplate any charges whatsoever in this crash,” he said. “This remains an accident, and an accident is not a crime.”

Drug recognition experts — police officers trained to identify people suspected of being impaired — were not dispatched to either the site of the crash or the hospital, Sheriff Villanueva added.

Although Woods appeared “lucid and calm” immediately after the accident and was able to answer questions from Deputy Carlos Gonzalez, the first emergency responder to arrive at the scene, he “had no recollection of the crash itself” when asked at the hospital, Villanueva said in a Feb. 24 appearance on CNN.

Forensic experts from across the country who are not involved in the investigation told USA Today, for an article published on March 13, that it appeared to be either a case of falling asleep at the wheel or of impaired or distracted driving.

The crash occurred on Hawthorne Boulevard near Rancho Palos Verdes, a coastal city of about 42,000 people in Los Angeles County.

How dangerous is that stretch of road?

Only one of those accidents was officially determined to have involved a person under the influence of drugs or alcohol, according to the data, and none involved someone using a phone. Two of the 13 accidents were single-vehicle crashes, and the data indicated that neither driver in those cases had been driving under the influence.

The speed limit there is 45 miles per hour, but Deputy Gonzalez said he had sometimes seen vehicles going more than 80 miles per hour. Sheriff Villanueva said it appeared that Woods had been driving at a “greater speed than normal” on the day of the accident. 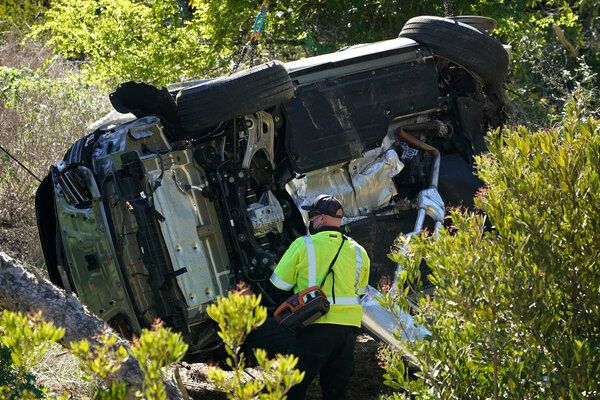 What car was Woods driving? Why was he in the Los Angeles area?

Woods was in Southern California to host, but not to compete in, the Genesis Invitational at the Riviera Country Club in the Pacific Palisades section of Los Angeles the weekend before the crash. Genesis Motor is a luxury vehicle division of Hyundai. Woods was in a 2021 Genesis GV80 S.U.V., which was provided to him during the tournament; he is known for always driving himself in a courtesy car at tournaments.

Woods stayed after the weekend to do promotional work for Golf Digest and GolfTV, and when the crash happened, according to ESPN, he was on his way to a photo shoot with the N.F.L. quarterbacks Drew Brees and Justin Herbert.

How have fellow golfers responded?

At the 2021 Masters, Rory McIlroy and Justin Thomas, two of Tiger Woods’s closest friends on the PGA Tour, said that they had recently visited Woods at his Florida home and were encouraged by how he was handling his recovery.

“When you hear of these things and you look at the car and you see the crash, you think he’s going to be in a hospital bed for six months,” McIlroy said on April 6. “But he was actually doing better than that. I spent a couple hours with him, which was nice. It was good to see him in decent spirits.”

McIlroy lives near Woods’s home in Jupiter Island, Fla., as do tour players like Thomas, Rickie Fowler and Brooks Koepka, who have also gone to see Woods.

“I’m sure he appreciates that,” McIlroy said. “We all have a responsibility to try to keep his spirits up and keep him going and try to get him back out here.”

Thomas described Woods’s recovery as “good” and said that each week he was home he had tried to stop by Woods’s house a couple of times. “That’s just what I want to do for him, is just be like: ‘Dude, I’ll do anything you want. If you need me to help out with your kids, I can do that. If you’re craving McDonald’s and you want me to bring it over, dude, I don’t care. I’m here for you and I’ll help out however I can.”

Thomas said he had spent substantial time watching sports on television with Woods. “We are fortunate with the basketball to just hang out,” he said, “and watch sports like we would any normal time.”

“It is hard to explain how touching today was when I turned on the TV and saw all the red shirts,” a statement on Woods’s Twitter account said. “To every golfer and every fan, you are truly helping me get through this tough time.”

Annika Sorenstam, 50, wore a red top and a black skirt at an L.P.G.A. Tour event in Orlando, Fla., while the maintenance staff at the Puerto Rican Open wore red in tribute as well.

On the day of the crash, celebrities and fans alike offered prayers and words of support on social media.

Where did Woods’s career stand before the crash?

Even before the wreck, it was not clear when Woods might play again or whether he would be able to pursue a record-tying sixth Masters victory this spring.

Woods was trying to recover from his fifth back operation, a microdiscectomy, which he had disclosed in January.

When he appeared on CBS on Sunday during the final round of the Genesis tournament, Woods was asked whether he would compete at the Masters at Augusta National Golf Club in April. “God, I hope so,” he said. “I’ve got to get there first.”

Although Woods said last month that he expected to miss at least two tournaments, he did not publicly rule out playing in the Masters, which he last won in 2019. On Sunday, he said he was “feeling fine, a little bit stiff,” and was awaiting another magnetic resonance imaging scan to evaluate his progress.

In the meantime, he said, he was “still doing the mundane stuff that you have to do for rehab, the little things before you can start gravitating toward something a little more.”

Woods tied for 38th place in the 2020 Masters, which was played in November because of the coronavirus pandemic. Although he shot a 10 on the 12th hole during the final round, he birdied five of the final six holes.