After Jessie Diggins crossed the finish line of the Tour de Ski cross-country race in Val di Fiemme, Italy, she collapsed onto her belly with arms and legs splayed on the snow, body heaving. A grueling eight-stage race held over 10 days, the Tour de Ski is the World Cup cross-country ski circuit’s marquee event and, by most accounts, its toughest.

No American had ever won the 15-year-old event until Diggins did so on Sunday.

And in Stage 3 of the tour last week, she and her teammate Rosie Brennan finished first and second in a 10-kilometer freestyle pursuit, becoming the first Americans to take the top two spots on the podium in a World Cup cross-country race. Two days later, they did it again in Stage 4’s 10-kilometer individual freestyle race.

“It was such a true, collaborative effort,” Diggins, 29, said. “My first thought is gratitude to the greater team and all the learning and benefiting from the generations that came before.”

European countries, particularly Sweden and Norway, have historically dominated Nordic skiing, as cross-country is known. For decades their national teams have been well funded — some by government financing — and have been supported by large staffs of coaches, wax technicians, therapists and trainers.

In recent years, however, American Nordic skiers have gained significant funding from U.S. Ski and Snowboard, and from individual donors such as the Shelby Cullom Davis Charitable Fund. The team now has its own wax truck, nutritionist, physical therapist and sports psychologist. The bump in funding and support has coincided with the team’s mounting success. 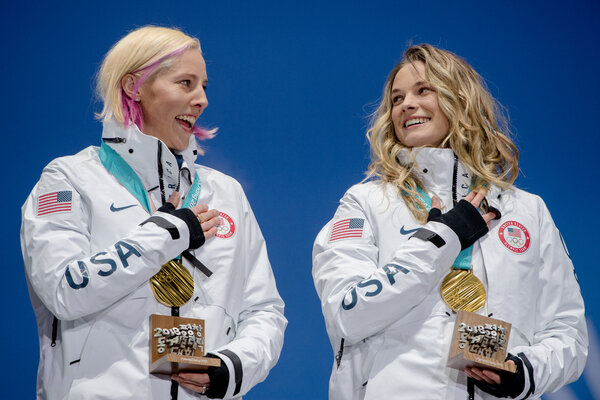 In 2018, Diggins and Kikkan Randall became the first American women to win Olympic medals in cross-country skiing, earning gold together at the 2018 Pyeongchang Games in a team event.

“When I started, I was the only woman on the team,” said Randall, who retired after winning gold in 2018 and who watched every stage of the 2021 Tour de Ski with anxiety and elation. “We carried our own skis, loaded everything in and out of the cargo van, did our own cooking. My last season was when we got the wax truck. I like to joke with the team now and say, ‘You don’t know how good you have it.’”

Now Diggins has made a mark in one of the toughest races in the sport.

The Tour de Ski included a variety of sprint and 10-kilometer races, characterized by individual surges and (literal) plummets. The event culminated with Sunday’s 10K hill climb, which took racers directly up the downhill ski area on a course with an average slope angle of 12 percent and with sections reaching a gradient of 44 percent — better suited for climbing with crampons than scaling with the lightweight skinny skis used in the sport.

It’s no wonder Diggins — and everyone else — appeared to be hyperventilating at the finish line.

“It’s almost comical, how brutally hard it is,” Diggins said. But brutally hard is par for the sport. As Matt Whitcomb, the U.S. cross-country ski team coach, said, “At the end of the day, if you can’t make your body sustain pain, you’re not going to be successful.”

Diggins, a Minnesota native, is on the fast track to becoming the country’s most decorated Nordic skier of all time, surpassing Randall.

“There’s a lot of athletes in a lot of sports who don’t know the meaning of ‘give up,’ who say, ‘I’ll run through a brick wall.’ I don’t think many athletes can actually do that. Jessie can,” said Jason Cork, the coach of the American team at the World Cup and Diggins’s coach since 2010. “There’s a lot of workouts I’ve seen her do where I’m like, ‘That’s probably enough. Let’s pull the plug.’ She’s like, ‘I can do a couple more.’”

Competing at the sport’s top echelon requires a level of fitness that takes years to achieve, and every competition involves the most full-fledged cardiovascular output imaginable. Cross-country ski racing includes several types of races over various distances on two styles of skis — skate and classic — both of which are narrow and lightweight, have no metal edges and are designed for fast gliding. Other than the use of skis, the sport is similar to running, and races are sprints, distance and team events.

“It’s like finding the biggest hill in your neighborhood and running up and down it as fast as you can over and over again,” Diggins said. “It’s one of the cool things about this sport; you have to push your body as hard as you can.”

Randall was the first American skier to gain international notice in the sport since Bill Koch, who won a silver medal at the Winter Olympics in 1976 and the World Cup overall title in 1982.

Randall landed her first World Cup win in 2007, earned consecutive sprint titles from 2012 to 2014 and, with Diggins, won a gold medal in the 2013 world championship team sprint.

Diggins has kept the momentum going. She is the only American Nordic skier to win four world championship medals, and with last week’s domination of the Tour de Ski, she surpassed Randall for the most spots on a World Cup podium (33 to 29) of any U.S. Nordic skier.

Diggins is known for wearing cheek glitter and breaking out in improvised dancing, but she also wrote a memoir last year, “Brave Enough,” in which she described conquering an eating disorder in her teens.

Diggins is not alone in her success, especially this season.

Brennan, 32, has struggled to remain on the U.S. team as her career has been riddled with injuries, but she went into the Tour de Ski after back-to-back victories on the World Cup circuit, a first for her. This season, she became the first American to simultaneously hold the World Cup leader’s jerseys in distance, sprint and the overall. Diggins took over in the latter category last weekend.

“It’s been crazy,” Brennan said. “I never in my wildest dreams thought I would wear the yellow jersey for even one day, much less a month. There’s no question that obstacles make you tougher. When you have success, you say, I did it, I can do it again.”

Two other American women (Hailey Swirbul and Sophie Caldwell Hamilton) have landed on the World Cup podium this season, and Sadie Maubet Bjornsen, the 2017 world championship bronze medalist, is scheduled to rejoin the team for the Nordic world ski championships, which begin next month in Oberstdorf, Germany.

All told, it’s an American force unlike the skinny-ski world has ever faced.

“We have been underdogs in the sport for many years,” Whitcomb said. “Kikkan started this for the team. When people work together and believe in one another, they become each other’s fuel.”