These are dark days for New York football.

Though both the Jets and the Giants have had their share of bad seasons, this is the first in which both teams have started with an 0-5 record.

Just how bad are these teams? And is there any hope for aggrieved New York football fans in the weeks ahead?

Has New York City ever started 0-10 before?

No, this is a first.

The Giants have staggered to an 0-5 start on five previous occasions, most recently in 2017 on the way to a 3-13 season. That debacle was particularly distressing since it followed a 11-5 regular season and a playoff appearance in 2016.

This season is actually the third 0-5 start in a decade for the Giants, who also started 0-6 in 2013. They also failed to win in the first five games in 1987 (two losses by the real team, then three by a particularly poor group of strike-breaking players), 1979 and 1976.

Although the Jets did not start 0-5 that year, 1976 was probably the nadir for New York professional football … at least so far. Both local teams finished with 3-11 records. The Giants began the season 0-9, the worst start for a New York team … again, so far. The Jets came perhaps as close as a team can to a winless season while still winning. The only teams they beat were the 0-14 Buccaneers and the 2-12 Bills (twice).

This season is only the third 0-5 start in Jets history. The most recent came in 1996, a season in which they lost the first eight games, then finished 1-15. The much reviled Coach Rich Kotite left after the season with a two-year record of 4-28. Their other 0-5 start came in 1980, after Jimmy Snyder, the oddsmaker better known as Jimmy the Greek, had inexplicably selected them to go to the Super Bowl.

And then came 2020, when the two MetLife Stadium tenants’ 0-5 starts have for the first time coincided in a grim syzygy.

What do the statistics say?

Pick a category. The Jets and Giants are probably near the bottom of it.

Let’s start with the smallest building block of football success: the yard. Going into Week 6, the Giants and Jets rank 28th and 29th of the 32 N.F.L. teams — and two of the three teams behind them have each played one fewer game.

A bigger building block is the point. The New York teams don’t have many of those either. The Giants and Jets rank 31st and 32nd in points scored. On the defensive side, the Jets rank tied at 30th for points allowed, while the Giants are at least mediocre, ranking 20th.

Ultimately, N.F.L. teams win by passing the ball efficiently. The Giants and Jets rank 28th and 31st in net pass yards per attempt. And while the teams’ receivers and their game plans must take some blame, the bulk of it is always going to fall on the quarterback. Of the 28 quarterbacks with at least four starts this season, the Giants’ Daniel Jones ranks 26th in adjusted yards per pass while the Jets’ Sam Darnold ranks 27th. Only Carson Wentz of the Philadelphia Eagles is lower.

(Joe Flacco, who subbed for an injured Darnold last week, was at least a little better.)

The running game doesn’t usually help a team that’s losing, and the Jets threw up a white flag this week by releasing running back Le’Veon Bell after they couldn’t find any team willing to trade for him. 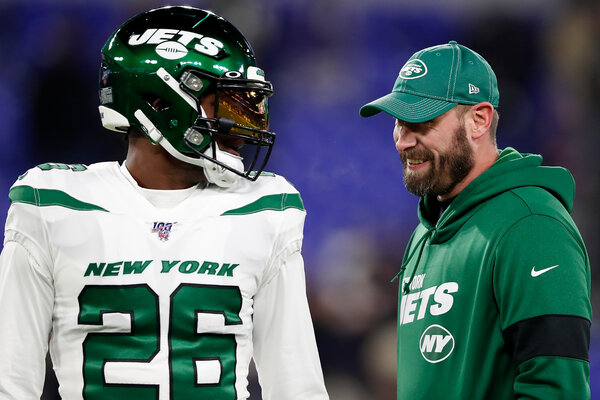 What are the coaches and players saying?

After Sunday losses, the Jets’ head coach has had several tough conversations with players regarding personnel changes, injury accommodations and scathing tape reviews to figure out how to change the outcome the following weekend.

Injuries, including Darnold’s belabored absence, have forced the team to adjust in reaction to who’s available, and recently that’s been nearly game-day decision-making. The exception: This week, Gase released running back Le’Veon Bell Tuesday night, shocking some in the locker room.

“I had no idea it had even happened, I had people calling me and telling me about it,” said wide receiver Breshad Perriman, who is hoping to play in the Jets’ next game.

“It was surprising to all of us,” tight end Chris Herndon said. “We’re all wishing him the best for wherever he lands next.”

Gase, by contrast, was placid in the face of yet another roster move, one that he’d had control over.

“We’re going to try to figure out what’s best for us going forward, who we want to use in the backfield and at wide receiver and all those things,” he said Wednesday.

With slightly more roster consistency than the Jets, Giants Coach Joe Judge said he was focusing on individual conversations with each of his players to bolster the team. “We’re very blunt, open and honest,” he said. “I’m going to tell you the truth every day.”

Giants coaches said quarterback Daniel Jones has been particularly hard on himself because of the team’s start and that practices emphasize working on the passing, running and kicking games. So, most things.

“It’s just doing your job and executing at a high level, play in and play out,” Jones said Wednesday. “You don’t know which play is going to ultimately decide the game.”

Which team is worse?

You might give the Jets a nod for losing their season opener to the surprising Bills by only 10. But since then it’s been ugly, capped by a home loss to the otherwise winless Denver Broncos and a 20-point shellacking, again at home, at the hands of the Arizona Cardinals.

The number crunchers who rate teams agree that the Giants are bad and the Jets are abysmal. The Sagarin, SRS, Inpredictable and Massey ranking systems use various methods to rate each team's overall ability. The all rank the Giants either 30th or 31st in the league. They all have the Jets dead last.

The Giants might actually win. Their opponent, the Washington Football Team, may be as bad as the New York squads. Washington is 1-4, and its single win came against the struggling Philadelphia Eagles. Home field means the Giants are actually a 2 1/2-point favorite, though you might not want to bet a fortune on them.

The Jets probably won’t win. Though their opponent, the Miami Dolphins, are no one’s idea of elite, they are 2-3, coming off a hammering of the 49ers on the road, and are playing the Jets at home. That’s good enough to make them an 8-point favorite.

Is there any hope on the horizon?

The Giants have a big built-in advantage. They play in the N.F.C. East. That means they still have two shots at the abysmal Football Team and the almost-as-bad Eagles. Throw in a game against the still-finding-themselves Cincinnati Bengals, and the Giants definitely have the opportunity to grab a few wins this season.

The Jets’ schedule looks worrying. Their divisional rivals include the resurgent Bills, the ever-dangerous Patriots and the decent-enough Dolphins, a much tougher lineup than the Giants face. Throw in road games against the Chiefs, the Chargers and the Seahawks, and the hypothetical losses keep piling up. Even a game that looked promising before the season started, at home against the Browns, suddenly doesn’t look so easy.

The Jets’ best chance at a win may be their home game against the Dolphins on Nov. 29, and a few other home games may be winnable. But they could find themselves as huge underdogs in most of their remaining road games: perhaps two touchdowns to the Chargers, Seahawks, Patriots and Rams, and maybe even three touchdowns in a potentially ugly game on Nov. 1 at the Chiefs.

But no 0-5 team has made the playoffs. Yes, the playoffs have been expanded to 14 teams this year. No, that won’t help.