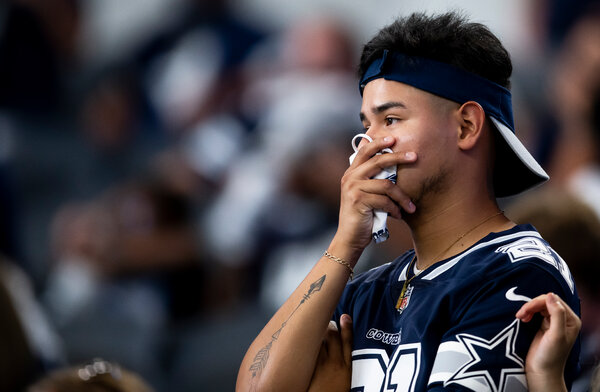 It’s never an easy transition, the CBS broadcaster Jim Nantz said last Sunday, shifting from discussing a grotesque season-ending injury to talking about football plays, but since that is what he and analyst Tony Romo were tasked with, that is what they did.

It’s what millions of TV viewers did, too, after Dallas quarterback Dak Prescott was yanked down by Giants defensive back Logan Ryan at such an angle, and with such force, that his right ankle buckled. Prescott, his eyes welling, was ferried off the field at AT&T Stadium in Arlington, Texas, in a medical cart.

The game, as always, went on. A new quarterback, Andy Dalton, came in for Dallas. The Cowboys beat the Giants. Prescott spent the evening in surgery.

A variation of this scene seems to unfold every week in the N.F.L. Heads bow, prayers are said, players kneel around a teammate felled by a torn ligament or ruptured tendon or broken bone. It was emotional watching the aftermath of Prescott’s injury, the former N.F.L. quarterback Brian Griese said, when teammates and coaches surrounded him in a hushed stadium.

“They do unbelievable things — they run through a wall sometimes and get back and pop up and run back to the huddle — and it’s easy to forget that they are human beings,” said Griese, now an analyst for ESPN’s “Monday Night Football,” in a telephone interview. He added, “It’s not natural or normal for somebody that we watch every week, and we root for, that in one moment they’re going to be the hero, and in the blink of an eye, their season’s over and they’re done, and there’s ramifications for their career. And we take five minutes and move on. That’s not normal. And I hope it never feels normal.”