LAKE BUENA VISTA, Fla. — Jimmy Butler scored and rebounded. He zipped no-look passes and threw himself into thickets of defenders. He barked at the most famous player in the world and hauled the Miami Heat back from the brink. The only thing Butler did not do on Sunday night was set up a pop-up stand at midcourt and sell more of his $20 cups of coffee.

There was a time — in the hours leading up to Game 3 of the N.B.A. finals, to be precise — when many members of the basketball-watching public questioned whether the Heat could make their series with the Los Angeles Lakers competitive. Miami had lost the first two games and two of its three best players to injury. And lest anyone forget: Butler had rolled his left ankle in Game 1. It was as if the Heat had been left to fight for a championship while riding a unicycle with a flat tire.

But for whatever reason, Butler thrives under duress — and he was special for the Heat in their 115-104 victory over the Lakers on Sunday. So much of what Butler does is hard to define or quantify, but he provided very large numbers on this occasion: 40 points, 13 assists and 11 rebounds while shooting 14 of 20 from the field.

There was another statistic that stood out: Butler did not try a single 3-pointer. By comparison, the Lakers shot 42 of them. In an era when long-range shooting has never been more valued or celebrated, Butler, a 6-foot-7 forward, ventured into the paint, again and again, to grind for layups, to absorb contact, to draw defenders and pass to open teammates.

Butler’s approach seemed like a tangible manifestation of his personality. He does not back down. He does not budge. And while few gave the Heat much of a chance against the Lakers, especially without Bam Adebayo (neck) and Goran Dragic (foot), both of whom were sidelined for the second straight game, Butler refused to listen.

“I think guys are starting to realize how much we belong on this stage and that we’re in the finals for a reason,” Butler said.

He even reserved a portion of the postgame news conference to pump up his teammate Duncan Robinson, a forward who has struggled with his outside shooting.

It is worth noting that Butler had not even been asked about Robinson. But Butler knew his words would get back to him. He was already plotting, already strategizing.

Before Game 4 on Tuesday night, the Lakers have work of their own. They were lackluster from the early stages of Game 3. They dribbled and passed as if the ball were coated in cooking oil, committing 10 turnovers in the first quarter alone. Still, the Heat led by only 3 — and that was when Butler and the Lakers’ LeBron James began exchanging words.

“Love it,” James said, adding of Butler: “One of the best competitors we have in our game.”

As for the Heat, they showed up for Day 88 of their bubble experience with every intention of prolonging it. They played swarming defense — trapping, lunging, swatting. It was the stuff of pure effort, and it was the only way their depleted lineup was going to make a game of it.

Butler played 45 minutes and spent many of them defending James. Several of Butler’s teammates focused their energies on the Lakers’ Anthony Davis, who tried just two field goals in the first half while picking up three fouls. He finished with 15 points and 5 rebounds.

“I just have to be better,” Davis said.

Late in the fourth quarter, Butler punctuated the win by telling James, “You’re in trouble!” Afterward, Butler said he was merely repeating what James had told him earlier in the game.

“I’m not just out there talking trash,” Butler said, “because I’m not.” 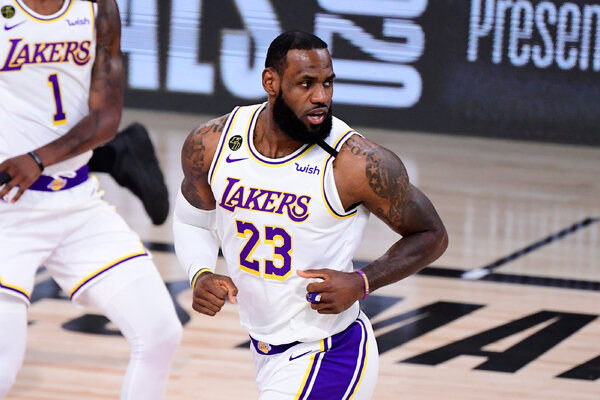 In any case, Butler has emerged as one of the bubble’s most colorful figures — and most dynamic players. In addition to launching a coffee business out of his hotel room, he has led a fairly unsung team to the sport’s glitziest stage by averaging 22.1 points, 5.9 rebounds and 5.5 assists through 18 playoff games.

It was only when they faced the Lakers in the opening game of this series that the wear-and-tear of the postseason seemed to strike them with the soft touch of a sledgehammer. Dragic, their starting point guard, tore a ligament in his left foot, and Adebayo, their All-Star center, strained his neck.

As the series moved along, Spoelstra’s pregame news conferences began to take on grim overtones — mostly because he continued to get asked about Dragic and Adebayo, and he kept having to say how difficult it was for him to resist their pleas to play.

“Both Goran and Bam are literally like family members, and I can see the anguish in their eyes,” Spoelstra said before Sunday’s game. “I know them and their soul, and they both would do anything to get out there and it puts me in a difficult position. We also have to be responsible, and that’s out of love for them.”

Spoelstra said both players had made progress — Adebayo worked up a sweat in a pregame shooting session — but neither was healthy enough to take the floor.

For his part, Butler said his injured teammates had asked him to deliver a win. In the process, he bought them some time to recover while making it a series.

“We’re not going to lay down,” he said. “We’re going to fight back in this thing.”