Jennifer Kupcho won the inaugural Augusta National Women’s Amateur in 2019. After a stellar collegiate career at Wake Forest University, she entered the event as the No.-1 ranked amateur in the world. In the final round, the weekend before Tiger Woods would win his fifth Masters championship on the same course, Kupcho faced Maria Fassi.

In the last six holes, Kupcho rallied to go five under par and beat Fassi by four strokes. Soon after, Kupcho turned pro, and has won over $1 million in her first two seasons.

Ahead of the second Augusta National Women’s Amateur, Kupcho, 23, shared her experience, including initially turning down her invitation to Augusta. The interview has been edited and condensed.

What was it like to get that invitation to the first Augusta National Women’s Amateur?

When I actually got the invite, I turned it down. I had gotten my L.P.G.A. card and decided to defer it so I could go back to school. The reason I was going back was to be with my team. We had a lot of tournaments lined up that spring. Initially it would have been too many tournaments. A month later, one of my tournaments got canceled. I talked it over with my college coaches and my parents. I asked Augusta if they’d let me back in. At that point I was No. 1 in the world.

What did Augusta say when you turned down the invite?

(Laughs.) I don’t remember exactly. My dad did a lot of my travel stuff when I was an amateur. He did make me email the tournament director myself to ask if they still had a spot. 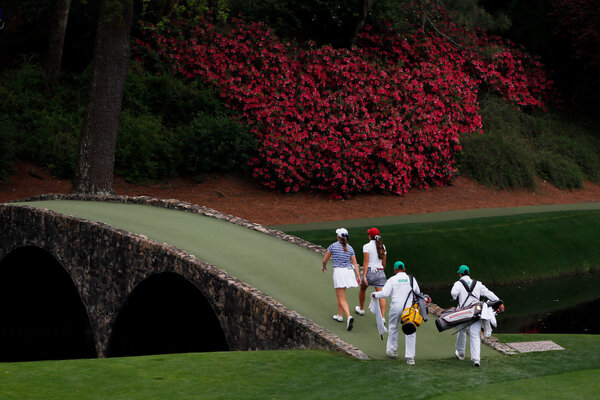 I had an event the week before, with my team. My parents came, and we all drove down in my Honda Civic from college. I got to play Augusta two years before with the Wake Forest team. It was nice to have already played it. I had already been awe-struck. When we first showed up, we got treated like royalty. It was so well organized. It was probably the best tournament I’ve ever played, even to this day as a professional golfer. After the first night, I said I’m glad I’m playing in this.

What was the feeling among the other competitors at Augusta?

We were all just so excited to go play Augusta. Maria and I had a decent lead over the other girls. I felt like I was going into battle with Maria, but we were also just such good friends from college golf.

What were you thinking in the final round?

I still think to this day that it’s crazy. It’s like my body just took over. That’s true for all events. I practice so much that my body just takes over to where I’m just thinking about yardages and how am I going to hit this shot.

What did it feel like after you won it?

I was so in shock. I had so much adrenaline. It’s hard to describe the feelings. I didn’t embrace it for months later. Even in interviews, I was like, I won a tournament. It didn’t feel big to me. But now it ranks very high for sure. It’s a very big moment in my career.

What will you be thinking this year watching the second Women’s Amateur?

The first thing that comes to mind is how are these girls going to follow up what Maria and I did. After that, I think, who’s going to win and do they realize how much this is going to change their life? I definitely did not.

What has turning pro been like for you compared with your amateur and collegiate career?

The biggest adjustment has probably been in my schedule. As a professional, I’m playing almost every week, traveling all over the world. During my amateur and collegiate career, I had much more time in between tournaments to practice and recover, so it was a bit more manageable.

Another adjustment has been the strength of my competition. There is so much talent on the L.P.G.A., and I’m playing against the best players in the world every week.