Early this season, Evan Scott was officiating an N.B.A. game in Portland when a member of the Trail Blazers’ coaching staff approached him during a timeout.

As a second-year referee in the league, Scott is accustomed to coaches complaining about calls during timeouts.

Jon Yim had sought him out for a different reason.

For much of Yim’s nine years as the Blazers’ video coordinator and player development coach, he has rarely shared the court with another Korean American. Scott, 28, is believed to be the first Korean American to officiate in the N.B.A.

“It was a nice little interaction to feel recognized and recognize him, as well,” said Scott, who was born in South Korea and adopted by an American family. “We talked about how there are a couple of others around the league.”

Recently, a small contingent of Korean-Americans have been hired for notable positions in the N.B.A., the W.N.B.A. and the G League. But for decades, Korean Americans in basketball have privately assisted younger colleagues, toiling to create more representation at the highest levels of the sport.

Early in Yim’s tenure with the Blazers, he was contacted by John Cho, who worked for 19 years as the Houston Rockets’ director of basketball technology.

“If you need anything, let me know,” Yim recalled Cho telling him. 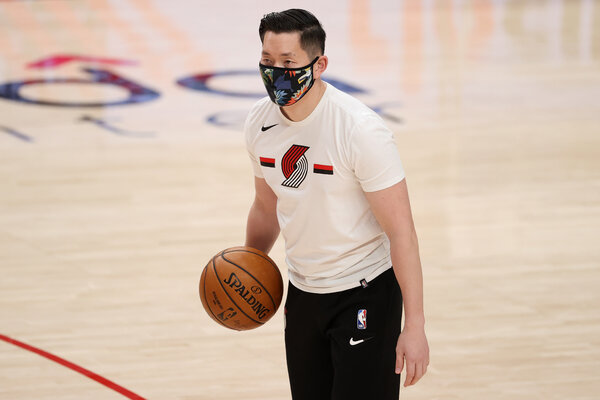 Yim extended a similar offer in 2018, when Yale Kim began working in basketball operations with the Phoenix Suns. Like many of his Korean-American colleagues, Kim finished his playing career around middle school; in Phoenix, he was suddenly asked to scout college players. To ease the learning curve, Yim advised Kim on various video scouting technologies.

“You’re always kind of reaching for people to look up to,” said Kim, 28. “I technically knew it’s possible to be a Korean American in basketball operations, but until you’re exposed to those people and find out about them, that’s when it feels attainable.”

In Major League Baseball, a group of Black athletes created a similar network based on mentorship and discussing shared experiences in a professional sport where their representation has fallen well below what it is in the general population.

There is believed to be only one player of Korean heritage who has suited up for an N.B.A. team. Ha Seung-jin, now a popular YouTube personality in South Korea, played 46 games for the Blazers in the 2004-5 and 2005-6 seasons. From 2018 to 2019, Ji-Su Park played for the W.N.B.A.’s Las Vegas Aces, and she is expected to be in camp for the upcoming season.

Recently, there have been efforts to bring more players of Korean descent into the N.B.A.

Milton Lee, the Nets’ director of basketball operations from 2010 to ’14, housed the Korean guard Daesung Lee in his New York apartment while Daesung Lee trained to prepare for the 2017 G League draft. They were introduced by Kiwook Kim, a Nets season-ticket holder from South Korea.

Although Daesung Lee played one year with the Erie BayHawks of the G League before returning to South Korea, renewed hope surrounds the Davidson sophomore Hyunjung Lee, who was second on the Wildcats in scoring this past season.

Eugene Park, the N.B.A.’s senior manager for elite basketball talent identification, scouted Hyunjung Lee at the league’s 2017 Asia Pacific Team Camp, then invited him to the N.B.A. Global Academy program for select young talent. In the off-season, Hyunjung Lee trains in South Korea with Brian Kim, who recently coached the G League’s Grand Rapids Drive and is another Park disciple.

Park, who also plays pickup basketball with Milton Lee, wrote in an email that while he holds the same standard for every player he scouts, he keeps “a close eye on grass-roots basketball competitions in Korea with the hope of identifying more Korean prospects” to potentially recruit to the Global Academy.

Park added that more basketball employees of Korean heritage would “showcase a more complete picture of our history.”

The news media and education systems in the United States have long struggled to properly characterize the depths of the Korean-American experience, the diversity of which is evident in the family histories of Park and his colleagues.

Yim’s ancestors were among the first Koreans to come to the United States, arriving in 1905 and working as pineapple farmers in Hawaii. Scott was one of an estimated 200,000 children placed for adoption after wars and their resulting economic turmoil devastated the Korean Peninsula during much of the 20th century.

Milton Lee said his father had escaped North Korea during the Korean War, never seeing his mother or sisters again; he immigrated to the United States and became a doctor. Arnold Lee, an assistant trainer with the Chicago Bulls, saw parallels between his family’s journey and the story told in the Oscar-nominated film “Minari.” His father was in his 20s when he visited America in the 1980s and decided to move here, looking to escape the financial uncertainty that gripped South Korea as it struggled to establish a democracy after decades of coups and military rule.

“I hope others find strength in these Korean-American journeys and use that to propel out of their comfort zone,” said Marshall Cho, the boys’ basketball coach at Lake Oswego High School in Oregon. Cho, who previously worked in the N.B.A.’s Basketball Without Borders program, co-founded the Kimchi Family speaker series on YouTube to highlight the stories of Korean Americans in basketball.

Rachael Joo, a professor at Middlebury College whose research focuses on how the sports media connects South Korean and Korean-American communities, called Korean N.B.A. employees “mavericks” for not having played professionally yet still breaking into a field dominated by former athletes.

Because of their lack of playing experience, many Korean Americans in the N.B.A. say they have experiencing impostor syndrome at various stages in their career.

“Every day I feel like, do I really belong here?” said Arnold Lee, who has worked for the Bulls since 2016.

Many of the Korean-American staff members interviewed said they had experienced racism within the game.

Scott said that fans in high school gyms and pro arenas had hurled slurs at him and that he had discussed the incidents with Isaac and Jacob Barnett, brothers of Korean descent who referee in the W.N.B.A. and the G League. The three of them grew up together in Northern Virginia, and the Barnetts encouraged Scott to become a referee.

Microaggressions are also common. Yim recalled being introduced to an N.B.A. general manager during the summer league and that a colleague had reported back that the executive perceived Yim as passive and soft and as someone who should be “happy you have a job.”

Yim, 36, is now well-regarded around the league. At 28, he gave up a teaching career to take an internship with the Los Angeles Clippers, getting to work at 6:30 a.m. to do everything from “wiping up sweat during pickup games” to training with players.

Blazers Coach Terry Stotts has called Yim an “instrumental” part of his staff, and Yim has built a strong rapport with Damian Lillard and CJ McCollum, Portland’s star guards.

Yim is also willing to be confrontational with referees. When he approached Scott this season, he started their conversation by arguing about what he thought was a missed foul on McCollum, before offering congratulations.