Judge joining Roger Maris and Babe Ruth as the only A.L. players with 60-homer seasons showed once again that no team does big moments quite like the Yankees. 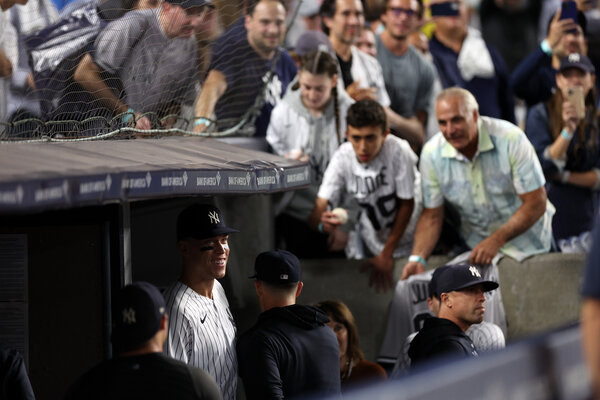 It was one of those nights, the kind that reminds you of the fundamental rule of the last baseball century: There are the Yankees, and then there is everyone else. From sepia tones to high definition, no other team does history, then or now, with such grandeur and resonance.

In the ninth inning on Tuesday in the Bronx, Aaron Judge became the third player in American League history to reach 60 home runs in a season. The others were also Yankees: Babe Ruth in 1927 and Roger Maris in 1961, and both had slugging teammates pushing them along. For Ruth it was Lou Gehrig, for Maris it was Mickey Mantle.

So what else could have followed Judge’s 60th homer but a game-ending grand slam by Giancarlo Stanton, later that inning, to beat the Pittsburgh Pirates, 9-8? No other active slugger can relate to Judge quite like Stanton, who once belted 59 homers in a season for Miami. It had to be Stanton to cap a night like this, with a screaming low liner into the left field seats.

“That’s a signature Giancarlo Stanton, 10-foot laser to the outfield,” Judge said, admiringly, in the interview room later. “I had a good front-row seat for that one. I think the whole team lost its mind.”

Judge led the charge from the dugout to greet Stanton at the plate. His pursuit of the A.L. record — 61, by Maris — is a personal achievement in a team game. Ruth and Maris finished their gilded seasons with championships, and Judge has never played in the World Series. He is not basking in his stat line.

“He hit 60 tonight and it’s like nothing happened,” Stanton said. “He’s got more work to do. That’s the mind set. That’s how it’ll always be.”

Whatever awaits the Yankees, who lead Toronto by five and a half games in the A.L. East, Judge will always have a place in the 60-home run club, a pinstriped-only party of three — the A.L. version, anyway. Barry Bonds, Mark McGwire and Sammy Sosa got there too, in the National League, right before baseball started testing for steroids.

McGwire and Sosa zipped past Maris in 1998. They both topped 61 again the next season, and Bonds set the record with 73 homers in 2001. Before all that, Yankees Manager Aaron Boone said, 60 had an unmistakable aura. Judge has not only revived it, but he has done so with no meaningful competition.

“I go back to him doing it in this season, the context of this season,” Boone said, noting that Philadelphia’s Kyle Schwarber has the next-highest home run total in 2022. “He’s got 40. He’s second. I mean, it’s unbelievable, 60 to 40. When I was playing, guys were routinely hitting in the 50s and 40s, bunched up in there. It ain’t happening now.

“And to be that far ahead of the field and be getting on base at the level he is, pushing for a batting title, playing the kind of all-around game that he is — in a disappointing night to that point, I tried to drink that in. I kept seeing ‘60’ on the board as he’s running around the bases. It’s hard for me to grip.”