The Trump administration is negotiating a deal to use its power to free up supplies of raw materials to help Pfizer produce tens of millions of additional doses of its Covid-19 vaccine for Americans in the first half of next year, people familiar with the situation said.

Should an agreement be struck, it could at least partially remedy a looming shortage that the administration itself arguably helped create by not pre-ordering more doses of the vaccine Pfizer developed with its German partner, BioNTech. Pfizer agreed this summer to provide the United States with 100 million doses by the end of March, enough to inoculate 50 million people since its vaccine requires two shots.

The Pfizer vaccine is one of only two that so far have been proven to work. The administration has locked in only enough doses of the two vaccines — the other, produced by Moderna, is on track to receive emergency authorization from the F.D.A. this week — to cover 150 million people by the end of June, or less than half the nation.

The administration recently asked Pfizer to sell it enough doses to cover an additional 50 million Americans, but Pfizer said it had already found customers around the world for all the doses it can produce until around the middle of next year. 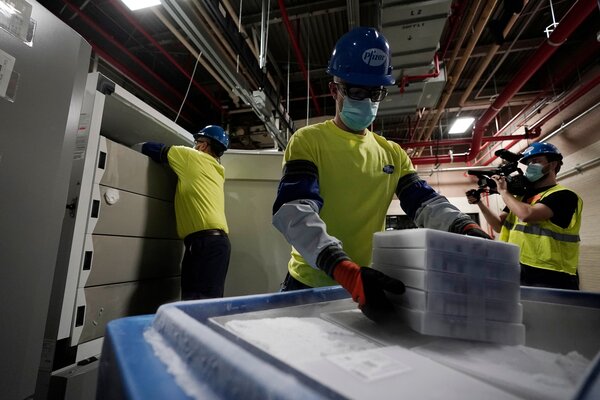 In recent days, however, Pfizer has indicated that it would be able to manufacture more doses if the administration orders the company’s suppliers to prioritize its purchase requests. The two sides are now negotiating a contract under which Pfizer would provide tens of millions more doses between April and the end of June.

According to one person familiar with the situation, Pfizer asked for that favored status with suppliers months ago. But before it was clear which vaccine trials would succeed, Trump administration officials were apparently worried about hindering other vaccine makers that had accepted billions of dollars in federal subsidies. Federal officials worked to prioritize orders for manufacturing supplies from those firms, including Moderna.

It is unclear whether the government’s concerns about squeezing the supply chain have now faded, or whether its interest in securing more of Pfizer’s vaccine has simply grown. Pfizer announced in November that clinical trials had shown that its vaccine was about 95 percent effective, and the firm was the first to win approval from the Food and Drug Administration for emergency use of its vaccine.

On Monday, Dr. Albert Bourla, Pfizer’s chief executive, told CNBC that the company had asked the federal government for priority status for some components of its vaccine manufacturing that he described as “critical.”

“We are asking them right now,” Dr. Bourla said, adding, “I hope they will do it very soon.”

After the company signed a contract last July pledging to sell the United States 100 million doses by the end of March, Pfizer officials suggested at least twice that the Trump administration reserve more doses, but were turned down, according to people familiar with the situation.

Answers to Your Vaccine Questions

With distribution of a coronavirus vaccine beginning in the U.S., here are answers to some questions you may be wondering about: