Alisa Anderson, a lifelong Catholic from Livonia, Mich., does not typically give much weight to the religious backgrounds of political candidates. But the deeply personal way Joseph R. Biden Jr. discusses his Catholicism has caught her attention.

“Biden has shown us that his faith has led him through some very dark times and I have admiration for someone who can admit that,” Ms. Anderson, 57, who is leaning toward Mr. Biden, said in a recent interview. “Trump has never made mention of his faith, unless it’s for political gain.”

That doesn’t bother Nathan Sullivan, a 29-year-old Catholic from Tucson, Ariz. For observant Catholics like Mr. Sullivan, the motive matters less than the results Mr. Trump achieves on issues like access to abortion.

“He’s a person of action,” said Mr. Sullivan, who reluctantly voted for Mr. Trump in 2016 but will enthusiastically do so this time, citing abortion as his most important issue. “I care a lot more about what he does than what he believes.”

Those two perspectives, from two critical swing states, shed light on the radically different appeal Mr. Biden and Mr. Trump hold for American Catholics, a diverse constituency that includes some of the few swing voters left in an era of intense polarization.

In recent years, the majority of white Catholics have leaned Republican and Hispanic Catholics tilted Democratic. This year, even as Mr. Trump trails in many polls, each campaign sees opportunities to reduce the other’s margins with Catholic voters — enough, they hope, to tip key states their way.

Mr. Biden and Mr. Trump have vastly different political bases, but both are battling over more conservative, religious Latinos in places like Florida and Arizona.

They are also targeting a segment of persuadable white Catholics in the industrial Midwest — in particular, blue-collar, union households in places like Wisconsin and Michigan. It’s a more competitive voting group than the white evangelicals who are among Mr. Trump’s most loyal supporters, and some polls in recent months have offered signs of erosion in the president’s advantage with white Catholics compared with 2016, when they favored him by about two to one.

“If you’re looking in the religious landscape for something that looks like a possible swing constituency, it’s a group Trump won strongly in ’16,” said Robert P. Jones, an author and the chief executive of the Public Religion Research Institute. “If I’m the Trump administration, I’m less worried about the white evangelical vote. I’d be deeply worried about where white Catholics are.”

Catholic voters motivated by faith are considered movable because the church’s teachings on a range of social and economic issues do not neatly align solely with the Republican or Democratic parties.

Mr. Trump and the Republicans have worked to attract those Catholics who have elevated opposition to abortion above all other issues, a strategy likely to be on vivid display in coming days as Mr. Trump prepares to nominate a new Supreme Court justice. Amy Coney Barrett, a federal appeals court judge who is a leading contender, is a Roman Catholic herself with a deeply conservative judicial record. And any nominee’s views on abortion rights will receive extensive scrutiny.

At the National Catholic Prayer Breakfast on Wednesday, Mr. Trump promised to protect “the sacred right to life’’ and said he would sign an executive order providing health care to babies born during failed abortion attempts.

Mr. Biden, by contrast, relies on his personal faith and background as a Catholic school graduate to build affinity with culturally Catholic voters. He is making a bid for voters who, like him, stress other aspects of Catholic social teaching that focus on caring for the poor and vulnerable. These Catholics say their church’s doctrine obligates them to welcome immigrants and refugees, and support labor unions and welfare programs, and they do not vote solely on the issue of abortion.

“I struggled politically with the idea of being pro-life versus pro-choice,” said Monica Alaniz-McGinnis, 43, of Mission, Texas, citing her Catholic upbringing. But she supports abortion rights and is deeply concerned about Republican efforts to rush through a new, conservative nominee to the Supreme Court.

“My fear now politically is that they’re trying to push this nomination and it’s going to stack the court, the liberal voice is going to be gone,” Ms. Alaniz-McGinnis said. “I think the approach they’re taking now is very unfair.”

She said she intended to support Mr. Biden. Though he supports abortion rights and has moved to the left on that issue as recently as the primary campaign, the former vice president has grappled with the subject for years.

Fifty-six percent of Catholic adults generally favored abortion rights, according to a poll last year from the Pew Research Center, despite the church’s position on the matter.

And though many observant Catholics oppose abortion, some argue that it is only one issue among many and that the Affordable Care Act, with its expansion of health care access, may prevent more abortions in the long run than a Supreme Court ruling outlawing the procedure.

In addition to striking notes of economic populism and white grievance, Mr. Trump’s message to white Catholics is focused heavily on abortion and what his team frames as religious liberty issues.

The president, who has described himself as a Presbyterian, rarely attends church, and in 2016 clashed with Pope Francis.

But his allies are especially attuned to more religious voters — especially the evangelicals who powered Mr. Trump’s 2016 ascent to the White House. Several current and former top officials in the administration are conservative Catholics, and the president’s wife, Melania, is also Catholic. 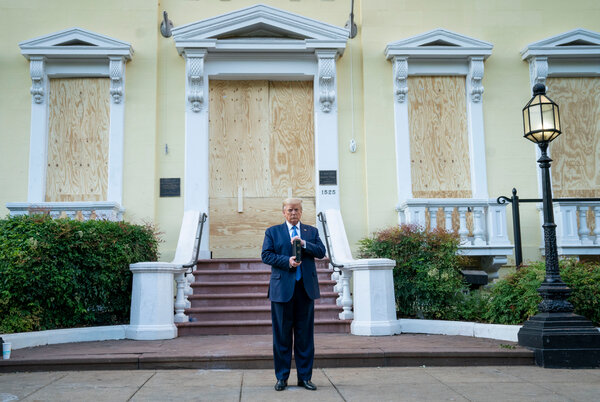 For Mr. Biden, the pitch is more personal. He is a weekly churchgoer who often keeps a rosary on hand (“The next Republican that tells me I’m not religious, I’m going to shove my rosary beads down their throat,” he said in 2005, according to The Cincinnati Enquirer), and he has a habit of crossing himself when he is considering making an edgy quip.

Mr. Biden would be the nation’s second Catholic president, and supporters hope that his background and his fluency with religious language help him connect with both spiritual and cultural Catholics.

“He represents the authentic, lived experience of a lot of Catholics in the United States,” said Ed Bruley, the Democratic chairman in the critical battleground of Macomb County, Mich.

Surveys of Catholic voters, most of them conducted before the death of Justice Ruth Bader Ginsburg, paint a mixed political picture.

Pew found Mr. Trump still performing well with white Catholics even in the summer, when his national poll numbers were at a low point because of his handling of the coronavirus crisis.

But surveys from the Public Religion Research Institute found that in the spring and summer, Mr. Trump’s favorability among this group dipped below 40 percent. New data from the organization found him recovering back to a 54-percent favorability rating with white Catholics.

But Mr. Jones, P.R.R.I.’s chief executive, saw the volatility of their attitudes as a lingering warning sign for the president.

“That’s a group he won handily and yet it’s a group that’s now saying their favorability of him is divided,” Mr. Jones said. “For both candidates, really, white Catholics in the Upper Midwest have got to be a priority focus.”

With the most secular group of Catholics, Republicans may not do “dramatically better,” said Newt Gingrich, the former House speaker and a co-chair of Catholics for Trump, whose wife, Callista L. Gingrich, is the ambassador to the Holy See. Among “the rest of Catholics, particularly including Latino Catholics who are very traditional and very pro-life,” he continued, “we are in pretty good position to make a compelling case.”

Mr. Trump is seeking to cut into the traditional Democratic advantage with Latino Catholics. The Biden campaign, amid some signs of weakness, last week launched Creyentes con Biden — Believers With Biden — aimed at Latino voters of faith with a focus on Florida, advisers said.

Catholic voters, they say, may connect with Mr. Biden’s story and the way he discusses policy matters — by discussing the “dignity” of work, for example, or promising to restore the “soul” of the nation.

Biden advisers say they have sought to weave faith outreach throughout other aspects of their strategy and messaging.

“It’s not a separate silo,” said Senator Chris Coons of Delaware, a close Biden ally who has a degree from Yale Divinity School, and spoke about Mr. Biden’s faith in a strikingly personal speech at the Democratic National Convention. “It is woven into how the Biden team is doing outreach.”

The Trump campaign and allies have been working to mobilize Catholic voters for months. They kicked off Catholics for Trump five months before Catholics for Biden held their official launch, and have hired Catholic coordinators in states like Pennsylvania, the campaign said.

Representatives for the organization CatholicVote say they have begun a $9.7 million campaign — focused on mail, digital and phone outreach — that criticizes Mr. Biden’s record on abortion, judges and other political issues. One spot accuses him of “sacrificing his Catholic values to kneel before the leftist mob.” (Mr. Biden has run his own ad featuring a speech in which he denounced violence and invoked Pope John Paul II.)

The CatholicVote campaign is targeted at Pennsylvania, Michigan, Wisconsin, Arizona and Florida, said Brian Burch, the president of the organization.

Four years ago, Alfonso Aguilar, the president of the Latino Partnership for Conservative Principles, submitted a blank ballot for president, appalled by Mr. Trump’s anti-immigrant rhetoric. This year, despite Mr. Trump’s record of harsh measures and rhetoric on immigration, Mr. Aguilar said he would be voting for Mr. Trump and had joined the campaign’s Catholic outreach organization.

“Life is an issue that is of the utmost importance,” Mr. Aguilar said. “It really trumps other issues. On that one he’s been incredible.”

Claudia Rodriguez, 34, was struggling with those tensions as she came out of Mass on a recent Sunday.

Ms. Rodriguez, a teacher from Chandler, Ariz., who voted third-party in 2016, said that being “pro-life” meant more than simply opposing abortion rights — it also required humane immigration and asylum policies.

The president’s frequent attacks on immigrants aren’t in line with her faith, she said, even as she mulled whether to support him.

“For me that’s always concerning,” Ms. Rodriguez said. “Because your character does matter — you’re our leader.”

President Trump declined for a second day to commit to a peaceful transfer of power if he lost the election, while Republicans, including Mitch McConnell, implicitly rebuffed him, promising an “orderly transition.”

Early voting for the presidential election starts in September in some states. Take a look at key dates where you live. If you’re voting by mail, it’s risky to procrastinate.

Keep Up With Our Coverage

Get an email recapping the day’s news