WASHINGTON — When Fuad El-Hibri, founder and executive chairman of Emergent BioSolutions, appears Wednesday before a House subcommittee to explain how the company’s Baltimore plant ruined millions of doses of coronavirus vaccine, he will be questioned by lawmakers he and his employees spent tens of thousands of dollars helping to elect.

Since 2018, federal campaign records show, Mr. El-Hibri and his wife, Nancy, have donated at least $150,000 to groups affiliated with the top Republican on the panel, Representative Steve Scalise of Louisiana, as well as Mr. Scalise’s campaigns. At least two other members of the subcommittee received donations during the 2020 election cycle from the company’s political action committee, which has given about $1.4 million over the past 10 years to members of both parties.

Mr. El-Hibri and his wife have made additional donations totaling more than $800,000 over the same period, with the majority going to Republican candidates and organizations.

Political giving is nothing new in Washington. But with the federal government as Emergent’s prime customer, Mr. El-Hibri and the company he founded have spent years cultivating ties on Capitol Hill, helping Emergent carve out a lucrative niche market as a government contractor under both Democratic and Republican administrations.

Now Emergent and its top executives find themselves under scrutiny from some of the very elected officials they have sought to influence.

Members of Congress are demanding answers from the company, which was awarded a $628 million contract last year to manufacture Covid-19 vaccines but has yet to produce a single dose deemed usable by federal regulators. Along with Mr. El-Hibri, Emergent’s chief executive, Robert G. Kramer, will testify beginning at 10:30 a.m. before the House Select Subcommittee on the Coronavirus Crisis, which has opened a sprawling inquiry.

Like nearly everything else about the coronavirus pandemic, the hearing is bound to be colored by politics.

Democrats, led by Representative Jim Clyburn of South Carolina, the panel’s chairman, are expected to use the session to put a spotlight on the company’s relationship with Trump administration officials, including Robert Kadlec, the former assistant secretary of health and human services for preparedness and response, who had previously consulted for Emergent. Dr. Kadlec has said that he was not involved in negotiating the company’s coronavirus contract but that he did sign off on it.

Democrats have also signaled that they will zero in on the executives’ stock trades. Emergent’s stock performed so well in 2020 that Mr. El-Hibri cashed in shares and options worth over $42 million, The New York Times reported in March. Mr. Kramer sold slightly more than $10 million in stock this year, according to filings with the Securities and Exchange Commission reported earlier by The Washington Post.

“They all made millions in stock transactions while they seem to be hiding stuff from the public,” Mr. Clyburn said in a recent interview with CNN.

Republicans, led by Mr. Scalise, who as the No. 2 Republican holds the title of whip, are likely to point out that the company’s contracts date at least to the Obama administration, which designated its Baltimore facility a center for innovation in advanced development and manufacturing — meaning it would be ready to make vaccines and other needed treatments in the event of a crisis. 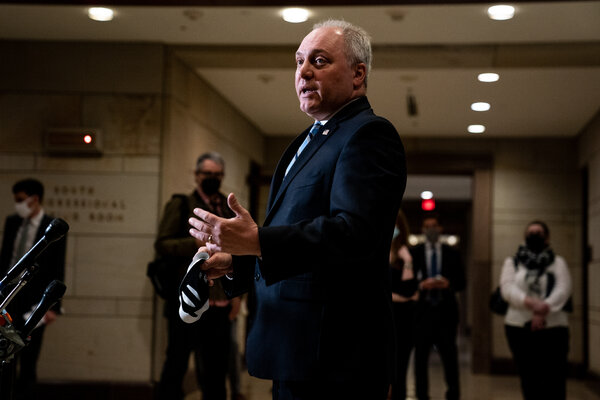 A spokeswoman for Mr. Scalise said that Mr. El-Hibri would receive no special treatment at the hearing. “The Democrats invited him as a witness, and Whip Scalise will treat him as he would any other witness that has been invited before the committee,” the spokeswoman said.

Until recently, Emergent was an obscure player in Washington, but a dominant force in the highly specialized market for drugs and vaccines aimed at countering a biological attack. The company burst into the limelight earlier this spring after The Times reported that workers at its Bayview plant in Baltimore had accidentally conflated the ingredients of two vaccines that rely on live viruses, forcing Emergent to discard up to 15 million doses of the Johnson & Johnson vaccine.

Food and Drug Administration inspectors subsequently raised concerns about possible further contamination, and the company has recently submitted a quality improvement plan to regulators. The equivalent of about 70 million more doses of Johnson & Johnson’s vaccine, mostly for domestic use, are on hold and may never be cleared for use in the United States.

“The collaboration with BARDA was designed to create a higher probability of success but was not without risk,” an Emergent spokesman, Matt Hartwig, said in a statement to The Times, using the acronym for the Biomedical Advanced Research and Development Authority, the federal agency that awarded the contract. “Our motivation in collaborating with BARDA was to help play a role in bringing the pandemic to an end and we are proud of the work of Emergent’s employees.”

Mr. Kramer, the chief executive, is likely to use the hearing to outline the company’s corrective action plan and to cast Emergent as a company committed to helping the country in crisis. During a recent earnings call with investors, Mr. Kramer announced a management shake-up and took “full responsibility” for the problems in Baltimore.

But he also cast some blame on the government, saying that federal officials had asked Emergent to manufacture the two live-virus vaccines — one developed by Johnson & Johnson and the other by AstraZeneca — despite the risk of contamination. He said that the company had taken precautions but that the contamination had most likely occurred when “one or more of these precautions did not function as anticipated.”

Through Mr. Hartwig, the Emergent spokesman, the El-Hibris declined to comment.

The company is a longtime partner to the federal government. Then known as BioPort, it was founded by Mr. El-Hibri in 1998 after he and some investors paid the state of Michigan $25 million to buy the license for a government-developed anthrax vaccine and an aging manufacturing plant. In the two decades since, the company built its business largely around selling products to the Strategic National Stockpile, the nation’s emergency medical reserve.

An investigation by The Times, published in March, found that the company’s anthrax vaccine had in some years accounted for roughly half of the stockpile’s budget and that the company’s aggressive tactics, broad political connections and penchant for undercutting competitors had given it remarkable sway over the government’s purchasing decisions related to the vaccines.

The company’s board is stocked with former federal officials, and its lobbyists include former members of Congress and aides from both parties. The company’s government relations shop is similarly stocked with partisans; Chris Frech, its top in-house lobbyist, worked for former President George W. Bush, and Grant Barbosa, a senior director for government affairs, was a legislative assistant to Vice President Kamala Harris when she was a senator.

Senate lobbying disclosures show that the company has spent an average of $3 million a year on lobbying over the past decade — much more than similarly sized biotech firms but about the same as two pharmaceutical giants, AstraZeneca and Bristol Myers Squibb, whose annual revenues are at least 17 times higher.

During the first three months of this year, Emergent reported spending $1.47 million on lobbying, enlisting the services of more than two dozen lobbyists from 10 firms.

Federal campaign disclosure records show that donations to the Emergent BioSolutions Inc. Employees PAC run the gamut. Board members and executives like Mr. El-Hibri give as much as $5,000, the maximum allowable amount per year under federal election rules. Some employees have contributed on a biweekly basis in amounts as small as $3.47. Three former employees said the company offered a payroll deduction program to make giving easier.

The employee group tends to spend in small dollar amounts, typically $1,000 to $2,500 on incumbents, including lawmakers representing states where it operates, like Maryland and Michigan. Representative Steny Hoyer, Democrat of Maryland and the No. 2 Democrat in the House, was a top beneficiary in the 2020 election cycle; he and an affiliated organization received a total of $10,000.

In an interview, Mr. Raskin said that he had been unaware of the donation until he was contacted by a Times reporter and that he had returned the money. A spokesman for Mr. Jordan said that the congressman had raised more than $18 million during the 2020 election cycle and that contributions had no bearing on his work as a legislator.

Mr. Hartwig, the Emergent spokesman, said in an email message that the PAC “supports incumbent Members of Congress of both chambers and from both parties who represent our employees and our facilities, and who are committed to preparedness and response for the next biological, chemical, or public health threat.”