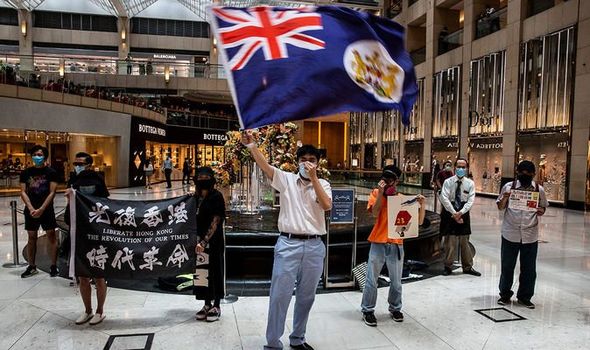 However, the Prime Minister has also indicated that this could be extended to a large proportion of the 7½million Hong Kong citizens who want to flee the tyranny of the Communist regime with one of the worst human rights records of any government in the world.

Tory MPs, who are normally anti-immigration, have already got behind the proposals.

North West Leicestershire MP Andrew Bridgen described it “as a moral duty” and said that Hong Kong citizens will bring hard work and valuable skills to the UK.

The survey of 1,331 Tory members by Conservative Progress showed that 62.6 percent back resettlement plans with 56.6 percent backing giving them full citizenship.

With anger growing over the Chinese government allegedly covering up the coronavirus outbreak 68.7 percent want manufacturing capabilities brought back from China to the UK while 88.7 percent back the creation of the so-called D10 group of G7 economies plus India, Australia and South Korea to form an economic bloc to combat China.

Last week Mr Johnson made it clear he would open the doors to 3 million Hong Kong citizens in response to Chinese oppression.

He said: “Today, about 350,000 of the territory’s people hold British National (Overseas) passports and another 2½million would be eligible to apply for them.

“At present, these passports allow visa-free access to the United Kingdom for up to six months.

“If China imposes its national security law, the British government will change our immigration rules and allow any holder of these passports from Hong Kong to come to the UK for a renewable period of 12 months and be given further immigration rights, including the right to work, which could place them on a route to citizenship.”