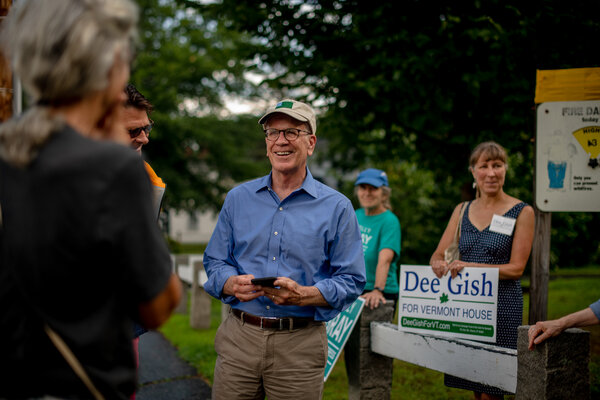 Two open seats in Vermont’s three-person congressional delegation have set up a rare changing of the guard. Senator Patrick Leahy, 82, a Democrat and the longest-serving member of the Senate, is retiring. Representative Peter Welch, an eight-term Democrat, is stepping up to run for Mr. Leahy’s seat. The shuffle has created Vermont’s first election for an open House seat since 2006.

Mr. Welch’s two primary challengers are both first-time candidates who have raised little money, and he has a huge advantage on Tuesday. In a poll released last month by the University of New Hampshire Survey Center, he was the favorite of 82 percent of likely Democratic voters.

Republicans will choose between Christina Nolan, a former U.S. attorney, and Gerald Malloy, a retired Army officer who has positioned himself on the hard right.

Because of Vermont’s solid-blue lean in federal elections (its other senator is Bernie Sanders), Mr. Welch will most likely have little difficulty winning in November.

Mr. Welch, 75, is a former member of the state legislature who was elected to the House of Representatives to succeed Mr. Sanders, who has endorsed him. He is a member of the Progressive Caucus and a co-sponsor of the Green New Deal, the sweeping plan to address climate change often mocked by conservatives.

A video that introduced Mr. Welch’s Senate campaign lists his priorities — including Medicare for all, voting rights and “reproductive justice” — and complains that “everything gets filibustered by the Mitch McConnell Republicans,” suggesting Mr. Welch would be a vote to overturn the legislative filibuster.

Mr. Welch, a lawyer, was a community organizer in Chicago early in his career before moving to Vermont, where he first worked as a public defender.

Mr. Leahy is the last of a wave of Democrats elected to Congress in 1974 after the resignation of President Richard M. Nixon over the Watergate scandal. That year, he held off a challenge from Mr. Sanders, who won 4 percent of votes running for the Liberty Union party. Third in the presidential line of succession, Mr. Leahy presided over the second impeachment trial of former President Donald J. Trump.

The Democratic primary for Mr. Welch’s seat as the state’s sole House member is the most competitive in Vermont. The field includes two women with strong résumés and fund-raising: Lt. Gov. Molly Gray and Becca Balint, the president pro tempore of the State Senate. If either comes through the primary and wins in November, Vermont would have its first female member of Congress. Ms. Balint, who appeared on the campaign trail recently with Mr. Sanders — who endorsed her — has held a decisive lead in polls.