“Members of both Houses of Parliament gather here to express our deep sympathy for the loss we have all sustained in the death of our sovereign lady, Queen Elizabeth.

“We have seen that this is a loss that is felt around the world.”

He went on: “Our late Queen was here to mark the historic moments, such as the 50th anniversary of the Second World War, a war in which she herself served in the armed forces. 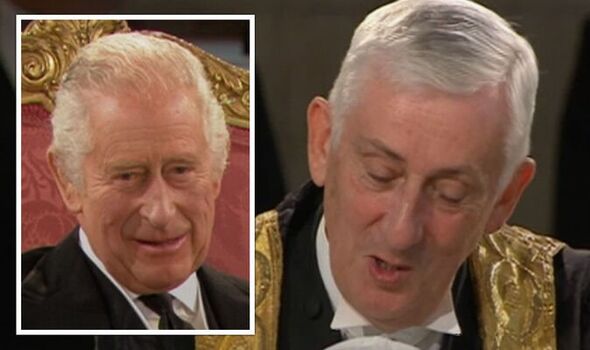 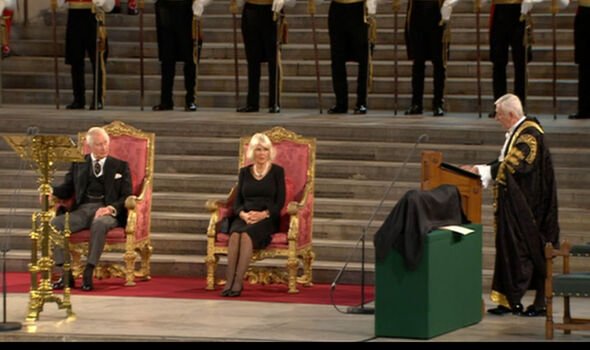 “It is perhaps very British to celebrate revolutions by presenting an address to Her Majesty; but those revolutions led to our constitutional freedoms, set out the foundation for a stable monarchy, which protects liberty.”

While the King promised “faithfully to follow” the example of his mother in his speech as both Houses of Parliament gathered to express their condolence to the new monarch.

In a short response inside the hall after a formal expression of condolence from MPs and peers, the new King quoted Shakespeare as he spoke movingly of tributes and monuments to his mother inside the Palace of Westminster and spoke of feeling the “weight of history” as he stood inside the historic room.

Speaking from a gilded lectern, Charles said: “I am deeply grateful for the addresses of condolence.”

He said the addresses “touchingly encompass what our late sovereign, my beloved mother the Queen, meant to us all”.

“As Shakespeare says of the earlier Queen Elizabeth, she was ‘a pattern to all princes living’.”

“As I stand before you today, I cannot help but feel the weight of history which surrounds us and which reminds us of the vital parliamentary traditions to which members of both Houses dedicate yourselves with such personal commitment, for the betterment of us all.” 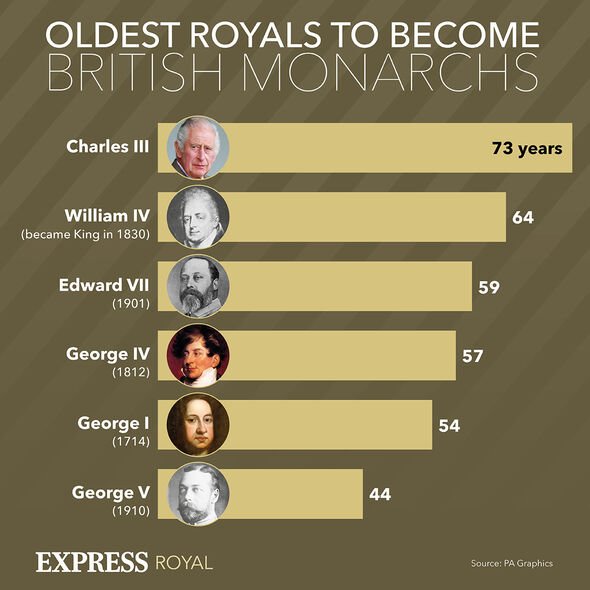 A fanfare of trumpets sounded as the King and Queen Consort, both dressed in black, arrived in Westminster Hall.

The crowds in the hall stood to attention and only sat once the King had done so, before the Lord Speaker followed by the Speaker of the House of Commons made a formal address to Charles.

The King told the assembled audience that Parliament is the “living and breathing instrument of our democracy” as he referenced the connections to “my darling late mother”.

In reply to addresses from both Houses of Parliament, Charles said: “Parliament is the living and breathing instrument of our democracy.

“That your traditions are ancient we see in the construction of this great hall and the reminders of medieval predecessors of the office to which I have been called and the tangible connections to my darling late mother we see all around us.”