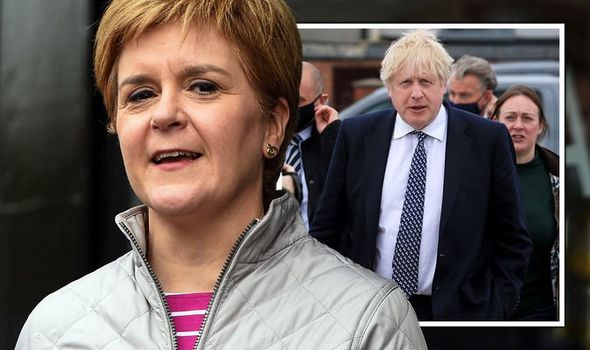 The SNP leader has vowed to hold a new vote on Scotland’s future in the UK if there is a majority of pro-independence parties after Thursday’s Holyrood elections.

Any vote must be sanctioned by the Prime Minister, who has made it clear he will refuse consent on a new referendum.

Ms Sturgeon has vowed to call Mr Johnson’s bluff and hold a new independence vote regardless of approval from Westminster.

She said the SNP would plough on with preparation for a fresh vote and would dare the Prime Minister to challenge the vote in court.

Ms Sturgeon told Sky News: “I’m saying if Boris Johnson wants to stop it, he would have to take legal action.

“If Boris Johnson didn’t do that, by definition it would be a legal referendum.

“If he did do that, the courts would decide.”

The latest claims on a new independence referendum come just 48 hours before the Scottish Parliament elections and act as a rallying call to SNP supporters.