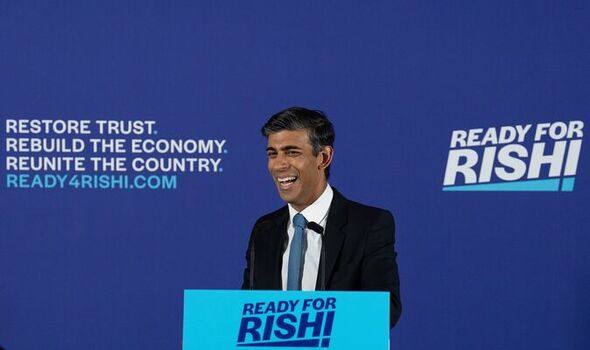 In a broadside to big-spending, low tax rivals, the former chancellor kicked off his Tory leadership campaign by calling for a “grown-up conversation” about the state of public finances and a “credible plan” for economic growth. He also sought to soothe anger among some Conservatives about his role in toppling Boris Johnson, by promising that he would not “demonise” the departing Prime Minister.

Launching his Downing Street bid at the Queen Elizabeth II centre,Westminster, with a “Ready for Rishi” slogan, Mr Sunak told supporters Mr Johnson had “a good heart” but was “flawed”.

Mr Sunak’s hopes to lead the party have been boosted by backing from Deputy Prime Minister Dominic Raab and Transport Secretary Grant Shapps.

Mr Shapps, who abandoned his own candidacy in the race to throw in his lot with Mr Sunak, said the 42-year-old father of two had the “competence and experience to lead this country”.

Meanwhile, Mr Raab broke his silence about which candidate he was backing by appearing on the podium yesterday to introduce Mr Sunak.

Mr Raab declared: “While others talk the talk, Rishi this month delivered the biggest tax cut for working people in a decade. He did it because he is a true Conservative.”

Mr Sunak used the launch to pitch himself as a serious candidate who would be “honest” about the challenges facing the Government, rather than trying to grab votes with promises of giveaway tax cuts.

He said: “We need to have a grown-up conversation about the central policy question that all candidates have to answer in this election. Do you have a credible plan to protect our economy and get it growing?

“My message to the party and the country is simply, I have a plan to steer our economy through these headwinds.

”We need a return to traditional Conservative economic values and that means honesty and responsibility, not fairy tales.”

And in a swipe at his leadership rivals, Mr Sunak said: “It is not credible to promise lots more spending and lower taxes.

“I had to make some of the most difficult choices of my life as chancellor, in particular how to deal with our chance lar debt and borrowing after Covid. I have never hidden away from those, I certainly won’t pretend now the choices I made and the things I voted for were somehow not necessary.

“While that may be politically inconvenient for me, it is also the truth.

“As is the fact that once we’ve gripped inflation, I will get the tax burden down. It is a question of when, not if.”

Turning to his role in Mr Johnson’s resignation last Thursday, former banker Mr Sunak said: “I will have no part in a rewriting of history that seeks to demonise Boris, exaggerate his faults or deny his efforts. I am running a positive campaign focused on what my leadership can offer our party and our country.

“I will not engage in the negativity you have seen and read in the media.

“If others wish to do that, then let them. That is not who we are. We can be better than that.”

Mr Sunak told supporters it was an “incredibly difficult and sad decision” to quit as chancellor in protest at the Prime Minister’s conduct. 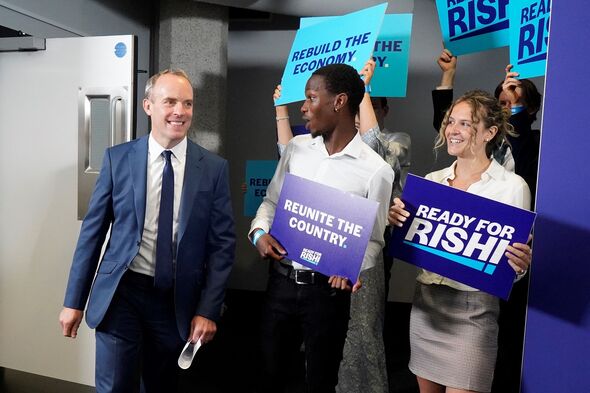 He said: “It wasn’t an easy decision…I have worked closely with Boris – and loyally – for almost two-and-a-half years.”

But he added: “When it came to it though, there were some things that were becoming too difficult for me to keep working with him on.

“It is important that whoever wins this election does restore trust, because trust has been broken and we need to rebuild all of that with the country.

“That is something I am keen to do as leader and I think I can do that.

“It is about the conduct of government which is important.”

Mr Sunak said concerns about his wife Akshata’s non-dom status and his retention of a US green card when he was chancellor had now been dealt with.

Saying “they’re all out there and we have discussed them”, he added that the Prime Minister’s then ethics adviser, Lord Geidt, had described his conduct as “meticulous”. Mr Sunak also ruled out giving any government job to Mr Johnson’s controversial former adviser, Dominic Cummings.

The ex-Downing Street aide, who masterminded the Brexit campaign in 2016 and quit in 2020, has repeatedly backed the former chancellor to be the next Prime Minister.

He added: “For the record, I’ve not communicated with Dominic Cummings since the day he left Downing Street.”

In a video, Mr Hancock said: “I know all of the candidates, excellent candidates, and I think that Rishi Sunak is the best-placed out of all of them to take this country through difficult times.”