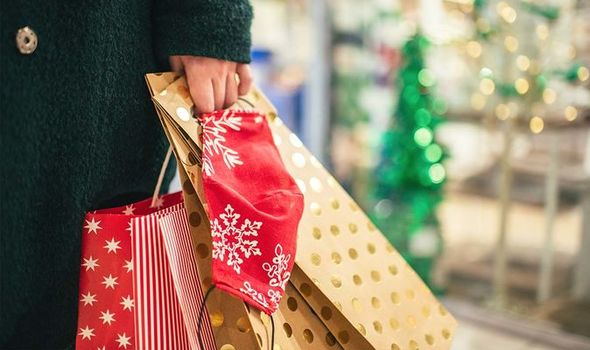 The Chancellor said the Government was working with businesses under pressure and doing “absolutely everything” possible to sort out supply shortages hitting stores. Mr Sunak said he was positive enough Christmas supplies would flow in time for the present-buying surge, saying: “We’re doing absolutely everything we can to mitigate some of these challenges.

“They are global in nature so we can’t fix every single problem, but I feel confident there will be good provision of goods for everybody.

“I’m confident there will be a good amount of Christmas presents available for everyone to buy.”

Save-our-Christmas measures include rules being eased within weeks to allow foreign lorry drivers to do more pick-ups when they are in the UK.

The current restrictions mean hauliers can make only two pickups or drop-offs on one visit to the country – which prevents overseas drivers from undercutting British workers.

However, the Government hopes the proposed changes will help meet the high demand in the UK for truckers. There will be a oneweek consultation, with reforms being made soon after.

Mr Sunak has also held talks in the United States with finance ministers from the G7 group of leading world economies to find a way to ease the international supply chain crisis.

He said the group agreed to work closely over the coming months to “build a strong and resilient recovery”.

The Chancellor said: “Supply chain issues are being felt globally – and finance leaders from around the globe must collaborate to address our shared challenges.”

But families will have to dig deeper in their pockets, as most sellers will put up prices by the end of the year, the British Retail Consortium warned.

Chief executive Helen Dickinson said three out of five were planning hikes this year because of soaring supply chain costs – and one in 10 has already done so.

She said: “The supply chain issues are the priority for all businesses right now. It is complicated because this looks slightly different for everyone, but they all see an immediacy to this issue.

“They are thinking about Christmas. It is the most important period of the year for a retailer.

Smooth “Takings for a non-food retailer in December are an average of 70 per cent higher than other months.

“They are doing everything they can right now to make sure it can be as smooth as possible.” Pepco, which owns the Poundland store chain, said shipping costs had jumped tenfold as a result of rising global demand.

The group’s chief executive,Andy Bond, said: “You get seasonal peaks at Christmas which further exacerbates the cost issue because you’re out there buying extra vessels than you normally would.

“There are some times where we have had to pay 10 times our normal rates. That’s not to say every day, but that has been the impact.”

He added: “I think that we see the next 12 months remaining challenging but we feel we’re set for another good year.”

But he warned that 50 per cent of it is sold between October and December and “even with fully stocked stores at the moment, our concern is that there could be gaps at Christmas”.

Mr Grant insisted there would be plenty of products in stores over the festive period, but there could be shortages of specific items. He said: “I would say, don’t panic. You will not see empty toy shelves.

“But if as a parent you know your child wants a special item, I would recommend that you buy early.

Demand “There will not be a shortage of toys at Christmas – there might just not be the particular one that you want.”

Labour shortages are hitting all parts of the UK’s economy and regions, making recruitment fiercely competitive.

Sports and leisure assistants, cleaners, supervisors and library clerks were among the most in-demand workers.

There was also a notable rise in demand for shops assistants in the run up to Christmas.

Around 235,000 new adverts were posted online in the space of last week, according to the Recruitment & Employment Confederation.

Chief executive Neil Carberry said: “The past month has seen a remarkable spike in job adverts.

“Businesses from almost every sector and local area are hiring right now, and with so much competition for staff, many businesses are having to offer increased salaries and benefits to attract the people they need.

“It’s a good time to be looking for work right now, but this bounce-back phase will pass.”

Mr Carberry added: “To truly level up, it’s time for the Government to work with businesses on skills, including at lower skills levels, capital investment and workforce planning to make sure we have a soft landing after this boom.”