The coronavirus outbreak will take centre stage in Westminster, with the latest figures from Public Health England showing nearly 2,000 people have been infected by the killer virus, resulting in 71 deaths. Chancellor Rishi Sunak has announced a range of financial measures aimed at securing the economy against the coronavirus impact, including £330billion in loans, £20billion in additional aid, a business rates holiday, and grants for under-pressure retailers and pubs. He promised to go further if the coronavirus situation worsened significantly, and if this bumper financial package doesn’t prove to be enough.

But the Labour Party immediately lashed out, with outgoing Shadow Chancellor John McDonnell saying he was “disappointed” the Government’s financial package of measures did not appreciate the urgency of the situation.

Mr McDonnell said: “Can I just say to him of course we recognise the immense threat from this virus that faces our country, in fact the globe, and we want to work with him to ensure that we do everything that we can to protect our economy and our people. 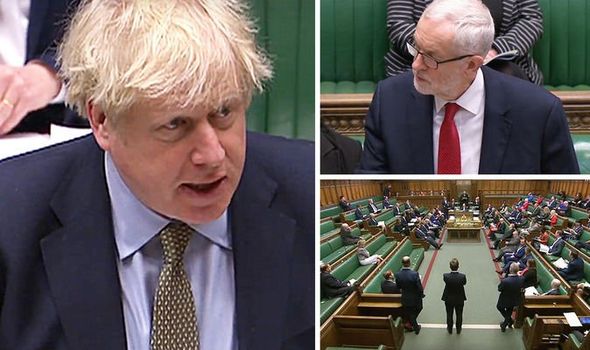 “But I have to say this to him, today in some of our constituencies people were being laid off, they were losing their jobs and losing their incomes and their livelihoods are being threatened.

“People are worried and I’m just disappointed that today’s package of measures didn’t really appreciate the urgency and the gravity of the situation for those individuals and those families.”

11.30am update: Johnson, Corbyn and only 15 MPs to be present during PMQs – ‘Eerie’ feeling

Boris Johnson, Jeremy Corbyn and 15 other MPs will be the only people present in the House of Commons during PMQs.

Deputy Chief Whip Steve Andrew has issued the following notice: “In order to ensure that we follow advice being given to the public, it has been decided that only people on the Order Paper should be in the Chamber for both Northern Ireland and Prime Minister’s Questions.

“We respectfully ask you to adhere to this message.”

Sky News Political Editor Beth Rigby: “There will be 15 MPs the PM and Jeremy Corbyn. How eerie it will feel.

“But govt has to practice what it preaches in regard to distancing.

“We are really on war footing.”