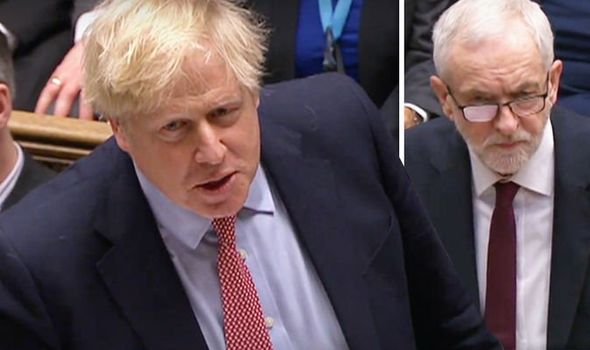 Boris Johnson is set to face down Labour Party leader Jeremy Corbyn in the House of Commons around midday on Wednesday. The clash comes just moments before the Chancellor, Rishi Sunak, is set to outline the 2020 Budget. Mr Johnson is likely to be quizzed over Britain’s response to the coronavirus crisis currently sweeping across the planet.

The Department for Health and Social Care has announced the UK has 382 confirmed cases of the deadly virus, and six deaths.

Yesterday evening, Health Minister Nadine Dorries also confirmed she had tested positive for coronavirus, and was self-isolating at home.

Labour MP Rachael Maskell said she has since been told to do the same as she had met Ms Dorries.

Former MP, and candidate for London Mayor, Rory Stewart, has even called for PMQs to be cancelled.

He wrote on Twitter: “The House of Commons should cease to meet in person. The budget should be announced online. MPs are at high risk through very frequent contacts and large gatherings. They are in danger of infecting each other in the chamber, and then going on to infect others. Time for Action. Now.”

Kate Ferguson, the Westminster correspondent for The Sun, suggested some MPs may avoid the Chamber, despite it being Budget day.

She wrote: ”Coronavirus panic appears to be spreading among MPs after Nadine Dorries has been taken ill.

“One tells me they think MPs will stay away from the Chamber even though it’s Budget day. ‘Parliament is effectively a giant cruise ship – MPs are here 14 hours a day’.”

After Prime Minister’s Questions, the 2020 Budget will follow, with Mr Sunak outlining the year’s plans.

And ahead of his statement, Mr Sunak told the Cabinet that the combined efforts of the Treasury and Threadneedle Street would “make the UK one of the best placed economies in the world” to cope with the impact of the virus.

But while the outbreak will be “front and centre in our minds”, Mr Sunak told senior ministers that the Budget will also deliver on promises to invest in public services and cut taxes.

11.57am update: Coronavirus panic among some MPs

Speaking on Sky News, presenter Adam Boulton noted the Chamber did not look “as busy” as it may look on Budget Day.

It comes after a Tory Minister tested positive for the deadly coronavirus, prompting fears across the House of Commons.