Scotland independence: King 'will be head of state' says MSP

SNP leader Nicola Sturgeon has been warned she risks “playing into Putin’s hands” with her ambition to hold a second Scottish independence referendum in October 2023. Despite the Russian invasion of Ukraine initially uniting Western countries in opposition, the unity of purpose appears to be wearing thin as the SNP marches ahead with dividing the union.  Writing in the Scotsman, Professor Azeem Ibrahim said: “[Russia] wishes to derail and derange the discourse in Europe. It has historically supported secessionist movements from California to Croatia, with Scottish independence a clear and longstanding entry on the Russian list. One of its most visible state-funded English-language propaganda networks, Sputnik, is based in Edinburgh.

“Defence Secretary Ben Wallace said publicly this year that Russia is notably interested in influencing the tenor of Scottish politics, and the shape of its debate on secession.

“Division weakens the Western alliance, and secession affords new friends in Europe for Russia to influence.”

The subject is likely to be broached by Scottish Conservative leader Douglas Ross in today’s session of First Minister’s Questions (FMQs) which begins in Holyrood at 12pm. 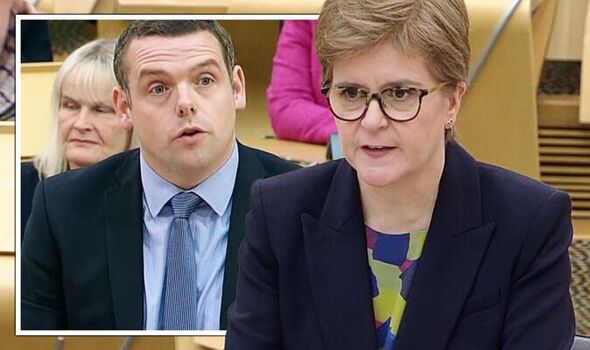 Nicola Sturgeon’s dream of an independent Scotland has been dealt a crushing blow after the publication of a report suggesting support has plummeted by seven points since the death of Queen Elizabeth at Balmoral Castle.

The Deltapoll survey suggests if there was a referendum tomorrow, 42 percent would back independence, compared with 49 percent a month ago.

In addition, 28 percent of those asked believed the Queen’s death on September 8 had strengthened the Union, compared with 18 per cent who felt it had weakened it.

Good morning from London. I’m Tara Fair, I’ll be bringing you all the latest developments on First Minister’s Questions. Please feel free to get in touch with me as I work if you have a story or tips to share! Your thoughts are always welcome.