The decision to vaccinate the prisoners ignited criticism over whether the government was prioritizing terrorism suspects over American citizens. 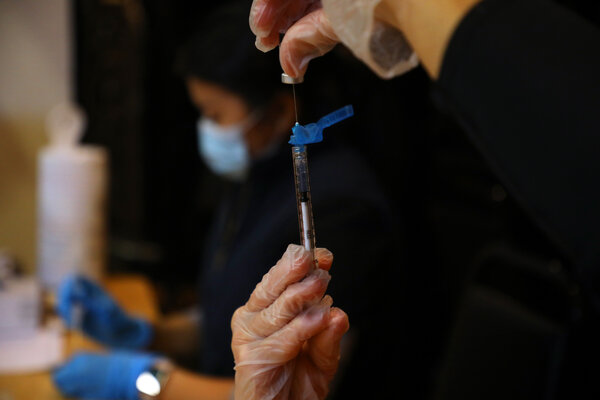 WASHINGTON — The Pentagon on Saturday halted plans to offer coronavirus vaccines next week to the 40 wartime prisoners at Guantánamo Bay after an outcry over whether the Defense Department was putting terrorism suspects before the American people.

John Kirby, a department spokesman, announced the reversal on Twitter, noting that none of the detainees had been vaccinated. A delay, he said, would let officials “assess the impact on force protection to our troops, and that’s always going to be the first priority.”

The 40 prisoners include Khalid Shaikh Mohammed, who is accused of being the mastermind of the Sept. 11, 2001, attacks, as well as six men who have been cleared for release by an interagency government panel.

The disclosure by The New York Times on Thursday of the plan to administer vaccines to Guantánamo prisoners incited a sharp backlash, particularly given the slow start of the vaccine rollout in the United States.

Most states have started vaccinating older adults, but people across the country have expressed frustration over vaccine shortages, long lines and canceled appointments.

Representative Kevin McCarthy of California, the top House Republican, chimed in on Twitter on Saturday to criticize the Pentagon’s initial proposal. “President Biden told us he would have a plan to defeat the virus on day 1,” he wrote. “He just never told us that it would be to give the vaccine to terrorists before most Americans.”

About 1,500 troops serve at the detention center in Cuba, most of whom are National Guard members who arrived during the pandemic and spent their first two weeks there in individual quarantine. But the Southern Command, which has oversight of the prison, has so far not disclosed how many of them were offered the vaccine and how many agreed to receive it.

Dr. Terry Adirim, the Pentagon’s principal deputy assistant secretary of defense for health affairs, signed a memo on Wednesday that authorized the vaccination of the detainees. She is a Biden administration appointee who has been serving as a senior health official at the Defense Department since July 2016.

Several hundred doses of the Moderna vaccine first arrived on the base on Jan. 7, and medical personnel received the first shots. It is not known if enough doses have reached the base to vaccinate everyone who seeks it among the 6,000 residents, who include sailors and their families, schoolteachers and contract laborers. The original plan was to begin offering vaccines to the prisoners on Monday. They were to receive information over the weekend to help them decide whether to accept the shots.

The lack of vaccinations has been a major obstacle to resuming the pretrial hearings in the Sept. 11 case, in particular because virtually everybody but the prisoners commutes to the court from across the United States, and vaccinating the prisoners, the lawyers, the judge and other court personnel has not been a priority.

Answers to Your Vaccine Questions

Currently more than 150 million people — almost half the population — are eligible to be vaccinated. But each state makes the final decision about who goes first. The nation’s 21 million health care workers and three million residents of long-term care facilities were the first to qualify. In mid-January, federal officials urged all states to open up eligibility to everyone 65 and older and to adults of any age with medical conditions that put them at high risk of becoming seriously ill or dying from Covid-19. Adults in the general population are at the back of the line. If federal and state health officials can clear up bottlenecks in vaccine distribution, everyone 16 and older will become eligible as early as this spring or early summer. The vaccine hasn’t been approved in children, although studies are underway. It may be months before a vaccine is available for anyone under the age of 16. Go to your state health website for up-to-date information on vaccination policies in your area

You should not have to pay anything out of pocket to get the vaccine, although you will be asked for insurance information. If you don’t have insurance, you should still be given the vaccine at no charge. Congress passed legislation this spring that bars insurers from applying any cost sharing, such as a co-payment or deductible. It layered on additional protections barring pharmacies, doctors and hospitals from billing patients, including those who are uninsured. Even so, health experts do worry that patients might stumble into loopholes that leave them vulnerable to surprise bills. This could happen to those who are charged a doctor visit fee along with their vaccine, or Americans who have certain types of health coverage that do not fall under the new rules. If you get your vaccine from a doctor’s office or urgent care clinic, talk to them about potential hidden charges. To be sure you won’t get a surprise bill, the best bet is to get your vaccine at a health department vaccination site or a local pharmacy once the shots become more widely available.

Probably not. The answer depends on a number of factors, including the supply in your area at the time you’re vaccinated. Check your state health department website for more information about the vaccines available in your state. The Pfizer and Moderna vaccines are the only two vaccines currently approved, although a third vaccine from Johnson & Johnson is on the way.

That is to be determined. It’s possible that Covid-19 vaccinations will become an annual event, just like the flu shot. Or it may be that the benefits of the vaccine last longer than a year. We have to wait to see how durable the protection from the vaccines is. To determine this, researchers are going to be tracking vaccinated people to look for “breakthrough cases” — those people who get sick with Covid-19 despite vaccination. That is a sign of weakening protection and will give researchers clues about how long the vaccine lasts. They will also be monitoring levels of antibodies and T cells in the blood of vaccinated people to determine whether and when a booster shot might be needed. It’s conceivable that people may need boosters every few months, once a year or only every few years. It’s just a matter of waiting for the data.

Employers do have the right to compel their workers to be vaccinated once a vaccine is formally approved. Many hospital systems, for example, require annual flu shots. But employees can seek exemptions based on medical reasons or religious beliefs. In such cases, employers are supposed to provide a “reasonable accommodation” — with a coronavirus vaccine, for example, a worker might be allowed to work if they wear a mask, or to work from home.

If you have other questions about the coronavirus vaccine, please read our full F.A.Q.

The Pentagon is preparing to hold its first arraignment at Guantánamo since 2014 on Feb. 22. Under the initial plan, the defendants in that case — Encep Nurjaman, who is known as Hambali; Mohammed Nazir Bin Lep; and Mohammed Farik Bin Amin — would have had the opportunity to be fully vaccinated before their first court appearance in more than 17 years of U.S. detention.

Mr. Hambali, who is Indonesian, is held at Guantánamo as the former leader of Jemaah Islamiyah, a Southeast Asian extremist group that became a Qaeda affiliate before the Sept. 11 attacks. The other two men, Malaysians, are accused of being Mr. Hambali’s accomplices in the 2002 nightclub bombings in Bali, which killed 202 people, and the 2003 Marriott hotel bombing in Jakarta, which killed at least 11 people and wounded at least 80.

Their case had been dormant for years. Then a day after President Biden’s inauguration, a senior Pentagon official who had been put in charge of the military commissions during the Trump administration approved the case for trial.

The Biden administration has yet to unveil its Guantánamo policy, although Defense Secretary Lloyd J. Austin III told Congress during his confirmation hearing that the administration would add no new detainees to the site and would seek its closure.