ROCKFORD, Mich. — When Representative Peter Meijer voted to impeach Donald J. Trump in January, making him one of 10 House Republicans who bucked their party, he bluntly acknowledged that “it may have been an act of political suicide.”

This month, during Mr. Meijer’s first town hall event since that impeachment vote, some of his constituents made clear to the newly elected congressman that they shared his assessment — not that Mr. Trump had committed an impeachable act by helping incite a riot at the Capitol, but that crossing him was an unforgivable sin.

“I went against people who told me not to vote for you, and I’ve lost that belief,” said Cindy Witke, who lives in Mr. Meijer’s district, which is anchored by Grand Rapids and small communities like this one in Western Michigan.

Nancy Eardley, who spoke next, urged Mr. Meijer to stop saying the election had not been stolen. She said he had “betrayed” his Republican base.

“I could not have been more disappointed,” Ms. Eardley said. “I don’t think that there’s much you can say that will ever change my mind into not primarying you out in two years.”

Mr. Trump’s acquittal on Saturday in his impeachment trial served as the first test of his continuing influence over Republicans, with most senators in the party voting not guilty and seven voting to convict him. But in Michigan, one of the key battleground states Mr. Trump lost in the November election — and home to two of the 10 House Republicans who supported impeaching him — there are growing signs of a party not in flux, but united in doubling down on the same themes that defined Mr. Trump’s political style: conspiracy theories, fealty to the leader, a web of misinformation and intolerance.

Recent elections in the statewide Republican Party have led to the elevation of Meshawn Maddock, a conservative activist who helped organize busloads of Michiganders to travel to Washington on Jan. 6, the day of the Capitol attack. Mike Shirkey, the majority leader in the State Senate and Michigan’s top elected Republican, was caught on a hot microphone arguing that the riot was “staged” and a “hoax,” a debunked conspiratorial claim now popular among Mr. Trump’s supporters. And, in a vivid indication of a divided state, an attempt by local Republicans to censure Mr. Meijer for supporting impeachment deadlocked, 11 to 11.

In the state’s Sixth District, which hugs Lake Michigan, two county branches of the G.O.P. have already voted to condemn Representative Fred Upton, a veteran Republican who also backed impeachment.

Victor Fitz, a prosecutor and Republican official in Cass County who supported efforts to censure Mr. Upton, said the current divide between the party’s base and its establishment wing was the biggest he had ever seen.

“There’s deep disappointment” with Mr. Upton, Mr. Fitz said. “And to be frank and honest with you, I think that there are some who believe, you know, he crossed the Rubicon with this vote.”

With loyalty to Mr. Trump as the all-encompassing point of dispute, Republicans are struggling with the idea of a proverbial big tent, and politicians like Mr. Upton and Mr. Meijer are at the forefront of the conflict. In the months since Election Day, as the president attacked the democratic process and a mob descended on the seat of American government in his name, the dangers of walking in his political shadow have rarely been more clear. However, what’s also clear is that his party shows little desire to break with him or his grievances.

The outcome of this tug of war will decide the direction of a party that is shut out of control in Congress and the White House, and must focus on making electoral gains in the 2022 midterm elections. The G.O.P. tent has made room for conspiracy theories like birtherism and QAnon, as well as for extremist elected officials like Representative Marjorie Taylor Greene of Georgia. Is there room for anti-Trumpers?

“That’s why Trumpism will continue long after Trump. People who weren’t around four years ago,” he said, “people we had never heard of, they now control the levers of the party.”

He added: “When you make a deal with the devil, the story usually ends with the devil collecting your soul. You don’t get it back and have a happy ending.”

Places like Western Michigan are a bellwether for conservatism, reflecting the Republican Party’s trajectory from a political coalition defined by Gerald Ford and Ronald Reagan to one centered on Mr. Trump. With opposition to big government running deep and the decline of manufacturing leaving deep scars, this region of the state has also come to have a libertarian bent and independent streak, as evidenced by former Representative Justin Amash, a prominent Trump critic.

During interviews, business stops and the virtual town hall event, Mr. Meijer has tried to explain his impeachment vote with a similar sense of principle. He responds to his Republican detractors with grace, and calmly points to the lack of evidence for Mr. Trump’s claims of voter fraud. He opened the town hall by describing the immense fear he and other lawmakers felt during the mob violence in January.

“This was a moment when we needed leadership and the president, in my opinion, did not provide that,” he said of Mr. Trump.

Still, the ground is shifting beneath Mr. Meijer’s feet, party officials in Michigan warn, including some in his own district, the Third Congressional. Angry people leave messages of “traitor” in response to his social media posts. News outlets supportive of Mr. Trump have needled Mr. Meijer and other Republican incumbents who backed impeachment by highlighting their primary challengers. What’s more, the vision of Mr. Trump lives on: Many in the party want to look backward at grievances like perceived election fraud, rather than focus on the next election cycle and reaching out to the swing voters he lost. 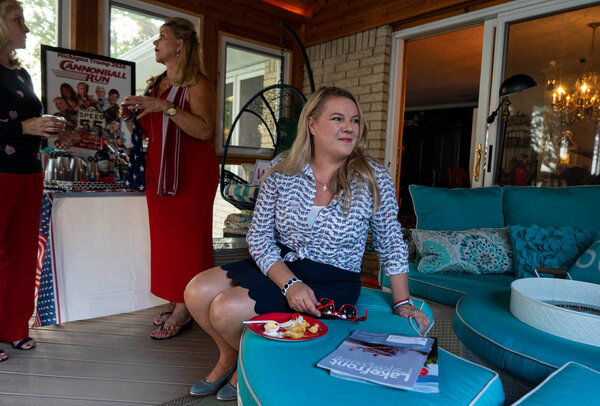 People like Mr. Timmer have pleaded with the party to address the suburban drift toward Democrats, which has plagued Republicans across the country. Ms. Maddock and others have zeroed in on unfounded claims of election fraud. Her husband, a member of the Michigan Legislature, and other state lawmakers signed a brief asking the Supreme Court to give state elected officials the power to overturn the election results.

From Riot to Impeachment

The riot inside the U.S. Capitol on Wednesday, Jan. 6, followed a rally at which President Trump made an inflammatory speech to his supporters, questioning the results of the election. Here’s a look at what happened and the ongoing fallout: