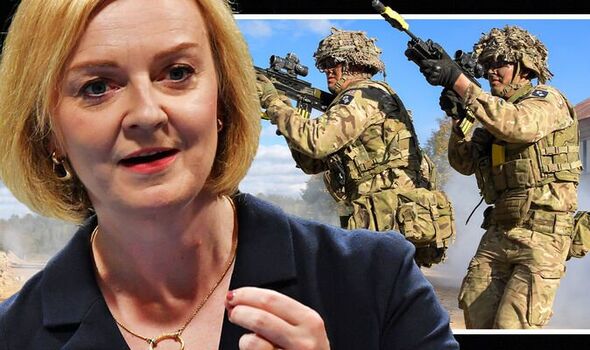 She pledged to ensure the nation can defend itself against authoritarian regimes such as Russia and warned that we face “a generation-defining moment for freedom, security and liberty”. Mrs Truss said: “The era of complacency is over. We are living in an increasingly dangerous world and our security is under more threat than it has been in decades.”

The Foreign Secretary, seen as the front-runner in the battle to replace Boris Johnson as Prime Minister, announced she would increase defence spending to three percent of GDP by 2030. The current defence budget, £42.4 billion, is around two percent of GDP.

Her plans go further than those set out by Mr Johnson at a NATO summit in June, when he said the UK would spend 2.5 percent of GDP on defence by the end of the decade. At current levels it would see £20 billion in additional spending.

She also confirmed she was fully committed to renewing the UK’s nuclear deterrent by delivering a new fleet of Dreadnought class submarines. Existing plans for a fleet of four are expected to cost £31 billion over the life of the programme, with £10 billion in contingency funding also set aside.

Focusing on defence and security as the Tory leadership campaign enters its final week, she promised to strengthen support for the UK’s intelligence services including MI6, which monitors threats from overseas, GCHQ and the National Cyber Force, established in 2020 to counter threats online.

Ms Truss said: “My number one priority as Prime Minister will be to keep our nation safe. We thought that peace and stability were inevitable – but they aren’t.”

She added: “We need to make sure that Britain has the deterrents it needs to lead the global efforts to tackle aggression from the likes of Russia and other authoritarian regimes.

“This is a generation-defining moment for freedom, security and liberty, and we must rise to it. We simply can not allow aggressors to think they will go unchallenged. As Foreign Secretary, I proved that I have the grit and determination required to stand up to Putin and I will continue to do so as Prime Minister. That is the only way we will keep our country safe in the years to come.”

Her announcement comes after NATO secretary general Jens Stoltenberg warned members of the alliance including the UK needed to increase defence spending in the face of growing threats.

He said last week: “We need to spend more on defence and I have been a politician myself for many, many years and I know that, of course, it is always more tempting to spend on healthcare, on education, on infrastructure, instead of spending on defence, but when we live in a more dangerous world, when we see the aggressive actions of President Putin against a sovereign, peaceful nation in Europe, Ukraine, and all the threatening rhetoric against Nato allies, then we need to invest more, and that’s exactly what Nato allies are doing.

“The UK already spends more than two percent but we need to do more together and we need to invest in new and more modern capabilities to ensure that we are able to also protect all allies in the future.”

Last week marked the six-month anniversary of the start of Russia’s invasion of Ukraine. Mrs Truss has vowed to continue Mr Johnson’s policy of staunch support for the Ukrainian people as they seek to defend their country.

The outgoing Prime Minister visited Ukrainian capital Kyiv to announce another major package of support, including unmanned surveillance and missile systems for the Ukrainian military.

The £54 million package of 2,000 state-of-the-art drones and loitering munitions will enable Ukraine to better track and target invading Russian forces. It includes 850 hand-launched mini-drones which can be used to provide live feeds and still images to troops, particularly important in urban warfare.

Mrs Truss is seen as the frontrunner in the Conservative leadership contest although supporters of rival candidate Rishi Sunak insist he could still win. Voting ends on Friday September 2 with the winner announced on Monday September 5. Mr Johnson will formally resign as Prime Minister the next day, when the Queen will invite the new Tory leader to form a government as Prime Minister.

Speculation has already begun about who is likely to serve in a future Cabinet. Kwasi Kwarteng, currently the Business Secretary, is thought to be Mrs Truss’ choice of Chancellor, while Jake Berry, champion of Conservative MPs in the north of England, has been tipped for a role such as party chairman or a Cabinet position overseeing regional economic development.