WASHINGTON — Prime Minister Benjamin Netanyahu of Israel took a moment on Tuesday to thank the Biden administration for its support during his country’s 11-day conflict with Hamas in Gaza — and then abruptly changed the subject, and his tone.

“We discussed many regional issues, but none is greater than Iran,” Mr. Netanyahu said, standing with Secretary of State Antony J. Blinken after their meeting in Jerusalem. He pointedly added that he hoped the United States would not rejoin the 2015 Iran nuclear deal, “because we believe that that deal paves the way for Iran to have an arsenal of nuclear weapons with international legitimacy.”

The Israeli leader’s remarks lent a sour note to his welcome of Mr. Blinken. And it undoubtedly echoed a few thousand miles away in Vienna, where a fifth round of negotiations aimed at bringing the United States and Iran back into compliance with the nuclear agreement, a top priority of Mr. Biden’s, opened on Tuesday.

As Mr. Netanyahu’s remarks made clear, the Gaza conflict appears to have earned Mr. Biden good will with the Israeli leader, and his public. But the prospect of a U.S. return to the nuclear deal threatens to generate new strains between Washington and Jerusalem on a subject that poisoned relations between President Barack Obama and Mr. Netanyahu.

“The big drama looms, and that is the Iran nuclear deal,” said Jonathan Schanzer, a Middle East expert at the Foundation for Defense of Democracies.

“I think both Biden and Netanyahu realize that whatever discomfort both sides may have felt throughout this current conflict, it is small fries compared to the political friction that is looming,” Mr. Schanzer added.

Compounding the trouble is the conflict in Gaza, which has created anger in Israel and among Republicans in Congress over Iran’s ties to Palestinian militants. Most analysts say Iran played no active role in this month’s rocket attacks on Israel from Gaza, even though Tehran openly cheered them on.

But Tehran has for years provided the Gaza-based militant groups Hamas and Palestinian Islamic Jihad with financial and military backing — and, after longtime smuggling tunnels were sealed, taught those groups how to build their own munitions.

Citing that relationship, 44 Senate Republicans signed a letter to Mr. Biden this month insisting that he cut off his negotiations with Iran, which they called “a longtime financial and material supporter of Hamas.”

“The United States must not do anything to enrich Israel’s enemies, such as by offering sanctions relief to a regime that seeks to destroy Israel,” the senators wrote.

The nuclear talks, in which the U.S. is negotiating indirectly with Iran, are aimed at bringing the U.S. and Iran back into compliance with the agreement, which was forged by the Obama administration and several other world powers. President Donald J. Trump withdrew from the deal in 2018 and subsequently hammered Iran with new sanctions, prompting Tehran to disregard the limits it had agreed to on its nuclear program and produce more enriched uranium that is closer to what it would need to fashion a nuclear bomb.

Karim Sadjadpour, a senior fellow at the Carnegie Endowment for International Peace, said that the conflict in Gaza had no apparent effect on the trajectory of the nuclear talks, but that it had cast into clearer relief a chief concern of Republicans and Israeli politicians.

“The greater source of instability in the Mideast is not Iran’s nuclear program, but its development and transfer of precision missiles, rockets and drones to its regional allies and proxies,” he said. 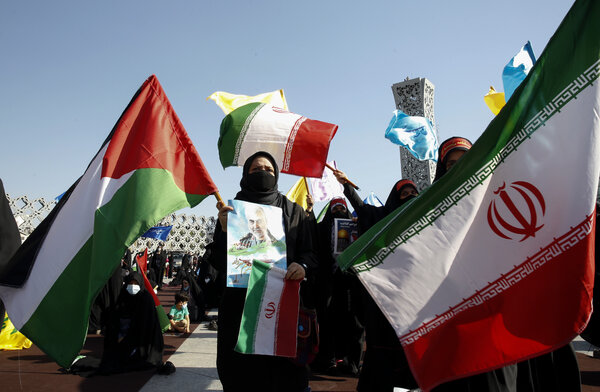 “We’re essentially going to be giving Iran tens of billions of dollars in sanctions relief to give up a weapon they never intended to use, and allow them to double down on weapons which the proxies are using every day,” he added.

During an online talk hosted by the conservative Hudson Institute in Washington on Friday, Ron Dermer, who was Israel’s ambassador to the United States from 2013 until earlier this year, spoke at least as much about Iran as he did about the Palestinians.

Mr. Dermer, now a private citizen but still a confidante of Mr. Netanyahu’s, said the Biden administration was “engaged in an accommodation of Iran at best, and appeasement of Iran at worst.”

During his joint appearance with Mr. Netanyahu, Mr. Blinken said the administration was “consulting closely with Israel, as we did today, on the ongoing negotiations in Vienna around a potential return to the Iran nuclear agreement, at the same time as we continue to work together to counter Iran’s destabilizing actions in the region.”

With a fifth national election in two years possible in Israel, the long-embattled Mr. Netanyahu’s days in power may be numbered. But David Makovsky, the director of the Koret Program on Arab-Israel Relations at the Washington Institute for Near East Policy, said he sees no immediate successor to Mr. Netanyahu who is more amenable to the nuclear deal.

Mr. Makovsky said Israeli officials hope to avoid the acrimony with Washington that characterized Mr. Obama’s nuclear talks with Iran. Mr. Netanyahu openly denounced the deal as lacking sufficient limits on Iran’s nuclear activity, in part because many restrictions phase out after a decade, and as failing to address Iran’s support of anti-Israel proxies like Hamas and Lebanon-based Hezbollah.

But he added that Israeli officials have grown skeptical of talk from Mr. Blinken and other Biden officials about a potential “longer and stronger” deal that would address Iran’s ballistic missile program and support for proxies.

The prospects for a revived nuclear deal not only hinge on negotiations in Vienna, but on electoral politics in Tehran, where a list of seven contenders for the presidential elections next month was announced Tuesday by a panel of clerics that vets the candidates.

Two associates of President Hassan Rouhani, a moderate who was an architect of the original nuclear deal, were disqualified from the final list on Tuesday, virtually guaranteeing that the next president will be a conservative hard-liner closely aligned with the supreme leader, Ayatollah Ali Khamenei. The candidate most favored to win is Ebrahim Raisi, the head of the judiciary.

While on the surface a hard-liner’s election may not bode well for the nuclear negotiations, it could have the opposite effect and even hasten an agreement before the election, some analysts said. Ayatollah Khamenei, despite his antipathy toward the United States, wants the negotiations on reviving the nuclear deal to succeed but does not want a moderate as the next president.

Suzanne Maloney, the vice president and director of the Foreign Policy program at the Brookings Institution in Washington, called the news about Iran’s elections far more significant than the conflict in Gaza. She warned that negotiating with Tehran will grow increasingly difficult “as the Iranian leadership appears even more uniformly malevolent than it does today.”

That would be just fine with Mr. Netanyahu, who has strained Mr. Biden’s nuclear diplomacy with what intelligence officials say are recent acts of sabotage against key Iranian nuclear facilities. Speaking at a Monday award ceremony for agents of Israel’s intelligence agency, the Mossad, Mr. Netanyahu suggested that his country was prepared to strike again.

“With or without an agreement, we will do everything to prevent Iran from arming itself with a nuclear weapon, because that is our existence,” he said.