Sharing a statement on Twitter, Jenkyns wrote: “On Thursday afternoon I went to Downing Street to watch the Prime Minister’s resignation speech. A baying mob outside the gates were insulting MPs on their way in as is sadly all too common. After receiving huge amounts of abuse from some of the people who were there over the years, and I have also had seven death threats in the last 4 years.

“Two of which have been in recent weeks and are currently being investigated by the police, I had reached the end of my tether.

“I responsed and stood up for myself. Just why should anyone have to put up with this sort of treatment. I should have shown more composure but [I] am only human.”

The Brexit-backing MP gave Boris Johnson protesters the middle finger after he resigned.

She also shouted “wait and see” to crowds who went to watch his resignation. 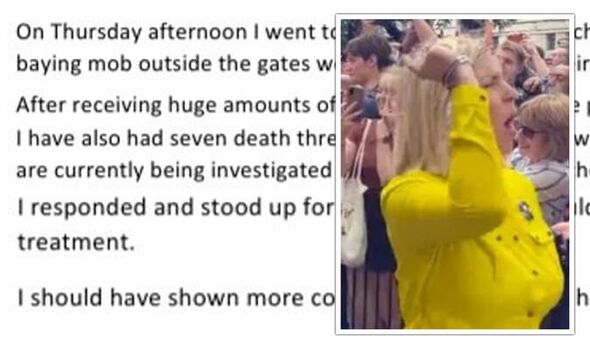 Since the incident on Thursday, Jenkyns has been given the role of education minister.

She tweeted: “It’s my honour to serve the prime minister as Parliamentary Under-Secretary of State for Education.

“Our education & care systems help to shape the next generation & lay the foundations for the future.”

Angered skeptics replied with comments including “Can’t wait for you teach our children good manners”.

Boris Johnson has been forced to reshuffle following resignations from 59 ministers.

Another Brexiteer, Peter Bone, was made the new deputy leader of the House of Commons.

Meanwhile, Damian Collins was made parliamentary under-secretary of state at the Department for Digital, Culture, Media and Sport.

It comes following the Prime Minister’s resignation on Thursday.