CHESAPEAKE, Va. — There is a far-reaching and oh-so-familiar shadow stretching across Virginia’s political landscape that could have profound implications for the election of a new governor, a contest that figures to be the only major competitive race in the country this fall.

Former President Donald J. Trump won’t be on the ballot in Virginia, but his political legacy will be.

Glenn Youngkin, an affable former private equity executive, is testing whether a Republican can sidestep Mr. Trump without fully rejecting him and still prevail in a state where the former president lost re-election by 10 points but where he remains deeply popular with conservative activists.

And in what could be an equally revealing strategy, former Gov. Terry McAuliffe, a Democrat seeking to reclaim his old job, is going to determine whether linking Republicans to Mr. Trump — a tactic that helped turn Virginia’s suburbs a deeper blue during the last four years — is as potent when he’s no longer in the Oval Office, or even on Twitter.

Both questions reflect a larger issue: how strong a tug the country’s polarized and increasingly nationalized politics can have on an off-year state race of the type that is usually consumed by debates over taxes, transportation, education and the economy.

It’s a real-life political science experiment that is all the richer because it’s taking place in a state that was once solidly conservative, and where for many years it was the Democrats who had to distance themselves from their national party.

But Virginia, which supported only Republicans for president from 1964 to 2008, is a state transformed thanks to its expansive metropolitan growth. George W. Bush was the last G.O.P. presidential nominee to carry the state, and Democrats control every statewide office and both state legislative chambers.

If Republicans are to win back the governorship and reclaim a foothold in this increasingly Democratic state, this would seem to be the year.

Mr. Youngkin is leading a unified party, can saturate the airwaves using millions of dollars from his own fortune and has never run for office, let alone cast a vote as a lawmaker, denying opposition researchers the grist for attack ads. That’s to say nothing of Virginia’s decades-long history of electing governors from the opposite party of whoever won the White House the previous year.

After he clinched an easy victory in the Democratic primary Tuesday night, Mr. McAuliffe — who is seeking to replace Gov. Ralph Northam, a Democrat who is constitutionally barred from seeking another term — sought to rouse his party by warning them that Mr. Youngkin’s ability to self-finance is a threat that must be taken seriously. “There are 75 million reasons why Glenn Youngkin could win,” Mr. McAuliffe told supporters, alluding to how much the Republican could spend on the campaign.

If Mr. Youngkin is able to spend enough money to define himself to voters before Democrats do it, and if President Biden’s popularity wanes by November — as it did with former President Barack Obama in 2009, the last time Republicans won the governorship here — Mr. Youngkin will be positioned to at least make the race close.

In contrast to the last two Virginia governor’s races, the G.O.P.’s conservative and more establishment-aligned factions are united behind Mr. Youngkin.

“This is totally winnable for Republicans,” said Jerry Kilgore, a former state attorney general and a Republican who once ran for governor himself. “But if he loses, there will be a lot of depressed people, because there’s a lot of optimism right now.”

To prevail, Mr. Youngkin will have demonstrate some Simone Biles-like footwork when it comes to answering for his party’s brand and, in particular Mr. Trump, the former and potentially future standard-bearer.

“I don’t think he’s coming this year,” Mr. Youngkin said in response to a question of whether he wanted Mr. Trump to campaign with him.

Standing outside a country-music-themed bar in the Tidewater region in the state’s southeast, where he grew up before amassing his fortune at the Carlyle Group in Washington, Mr. Youngkin was plainly more interested in contrasting his lack of political experience with Mr. McAuliffe’s decades as a party insider.

And after winning a hard-fought Republican nomination contest on Tuesday, Mr. Youngkin also appeared mindful of Mr. Trump’s grip on the party and did not want to slight a party leader who is famously sensitive to slights.

“I don’t think his schedule is — I think he has his schedule and is set to go to other places,” Mr. Youngkin tried again.

But, he was asked a second time, did he want to stand with Mr. Trump in Virginia?

“I think if he were to come, fine; if he doesn’t come, fine,” Mr. Youngkin said, settling on an answer. (In a separate interview, the exuberant Mr. McAuliffe said of Mr. Trump and Virginia: “I’d pay for the gas for him to come.”) 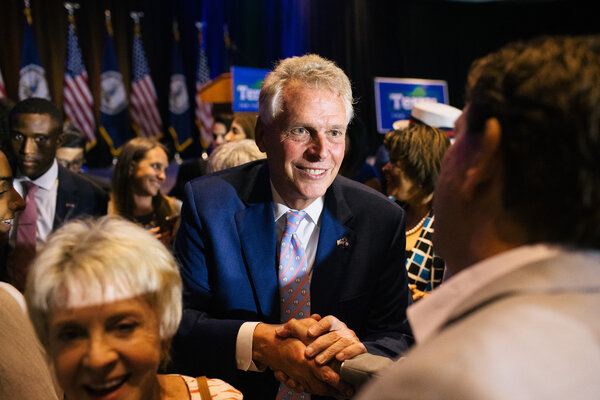 Mr. Youngkin was more direct when asked if he still thought Mr. Trump was the leader of the G.O.P. “I don’t think there’s such a thing as a leader of our party,” he said.

That answer triggered an unprompted clarification from an aide, who requested anonymity to say that what the candidate had meant was “that the Republican Party does not solely rely on one individual or leader” and that “Glenn really is the leader of the Republican Party in Virginia, as the party truly has come together around him.”

If he’s not willing to fully break with Mr. Trump — in fact, he gladly accepted the former president’s endorsement the day after claiming the nomination — Mr. Youngkin clearly wants to project a sunnier style of politics to the suburban voters who will decide Virginia’s election.

“I believe that Virginians are like Americans, are ready to come out of this pandemic and are ready to look ahead and think about hope and optimism and opportunity and not spend time basically tearing each other down,” he said.

Mr. McAuliffe, though, is determined to remind this state’s voters of the president they twice rejected. In his victory speech Tuesday, he cited Mr. Youngkin’s warmer words for Mr. Trump during the Republican nomination process. And in his final barnstorming tour of Virginia before the primary concluded, he ignored his intraparty rivals and lashed Mr. Youngkin to the former president.

Asked in an interview why he was still focused on Mr. Trump, Mr. McAuliffe said: “He may be out of office, but he’s the most powerful person in the Republican Party,” pointing to the Senate G.O.P.’s filibustering of a bipartisan commission to investigate the Jan. 6 riot at the U.S. Capitol.

“Are you kidding me?” he said, adding: “This man is as big with the Republican Party as he’s ever been. He has dominance over this party.”

Whether that’s enough to deter Virginians from electing a Republican governor is another question, though.

“As many people that died with Covid, including my mother — yes; yes, it’s still powerful,” Gaylene Kanoyton, a state Democratic Party official, said when asked whether invoking Mr. Trump was a successful strategy. “Our families and friends would have still been here if we had a different president.”

Other Democrats, though, are skeptical that waving the bloody flag of Trumpism will prove sufficient with voters who are eager to move on from his presidency.

“Talking about Trump in 2021 is really stale and won’t be enough to win swing voters,” said Ben Tribbett, a Virginia-based Democratic strategist, noting that even when Mr. Trump was president, Democrats had still used much of their advertising budget to highlight policy issues.

The question of how much Mr. Trump can be weaponized may be determined by whether he shows up in Virginia.

If he doesn’t, Mr. McAuliffe’s advertising campaign and stump speech attack lines may offer the best evidence. Already, the former governor is pairing his references to Mr. Trump with efforts to portray Mr. Youngkin as culturally out of step with a state that just eliminated the death penalty, imposed stricter gun laws and legalized marijuana.

“He’s proud of being a lifelong member of the N.R.A. — brags about it; I brag that I’m the first Democratic nominee to get an F rating,” Mr. McAuliffe said.

Ultimately, the governor’s race in Virginia may turn on whether a lavishly funded candidate can win without making any concessions to the political nature of his state. That’s what Republican governors like Gov. Larry Hogan of Maryland and Charlie Baker of Massachusetts have done to win in blue states and what Gov. John Bel Edwards, a Democrat, did to win in deep-red Louisiana.

Asked where he differs from his party, Mr. Youngkin did not offer up any specific issue but said his emphasis was on jobs, schools and public safety.

Yet he called his politics “conservative,” declined to say whether he supported same-sex marriage and answered a question about background checks for gun purchases by criticizing more aggressive restrictions.

Asked about the race and identity issues galvanizing his party’s base, Mr. Youngkin denounced “identity politics” but then made sure to introduce a reporter to the Republican nominees for lieutenant governor — Winsome Sears, a Black woman — and for attorney general: Jason Miyares, the son of a Cuban immigrant.

For Democrats, particularly those who remember the contortions of their own candidates in an earlier day, Mr. Youngkin’s reluctance to accommodate the leftward drift of the state is something no amount of money can overcome.

“Republicans in Virginia have to show they’re a different kind of Republican, and so far that’s not the Youngkin approach,” said Jesse Ferguson, a Virginia-reared Democratic strategist. “But their base won’t let their candidates create distance from the party or Trump.”