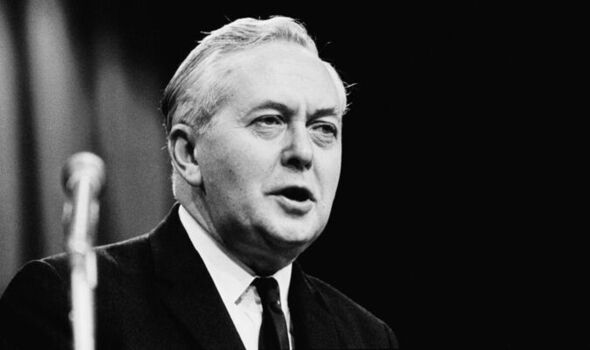 The political atmosphere was charged with electric tension as the Prime Minister stood up to address the hall. Speculation about his future was rife. Against the backdrop of economic crisis, the press was full of rumours about leadership plots by his circling rivals.

But far from being daunted by these threats, the Prime Minister went on the offensive. “I know what’s going on – I’m going on,” he said to thunderous applause from the party faithful.With that deft use of language, he deflated the conspiracy against him. He was to remain in charge for another seven years.

Despite all too obvious modern parallels, that speech took place at a Labour rally in London on May 4, 1969, and was given by Harold Wilson, the shrewd, unpretentious Yorkshireman who served two spells in Downing Street in the Sixties and Seventies. He is now the subject of a superb new biography by the distinguished historian and Labour frontbencher Nick Thomas-Symonds.

It is a book that has all the more resonance because so many of the problems that confronted Wilson are the same ones that the present Government faces, including pressure on the pound from the markets, Britain’s role in Europe, straitened public finances, the costs of the welfare system, a major war abroad (in his case, Vietnam) and escalating industrial action by militant trade unions.

The author’s current leader Sir Keir Starmer would do well to follow Wilson’s example as campaigner, given that Wilson not only won four out of the five general elections he fought – a 20th century record – but also became a star public performer.

Like Starmer, who was once memorably dubbed by rival Boris Johnson as “Captain Crasheroony Snoozefest”, Wilson began his political career as a sincere but wooden communicator, his dryness reflecting his previous wartime occupation as a civil servant who specialised in statistics.

However, as Thomas-Symonds demonstrates, he gradually transformed himself from being a bore into a figure of wit and vision, as adept in the Commons as he was on the campaign trail.

Yet for all Wilson’s skill in handling his party, as illustrated by the crucial May Day rally in 1969 episode when he outmanoeuvred his internal opponents, the verdict of history has not been kind to him.

He has been regularly portrayed as little more than an opportunistic tactician, without convictions or principles who was obsessed with keeping his party together and himself in power.

It was partly his short-termism, argue his critics, that was responsible for Britain’s decline in that era.

Some extreme detractors go far further, claiming that Wilson was even a direct security threat to Britain because he had been compromised by the Soviet secret police, both because of an alleged past affair and his extensive trade links with Russia built in the 1950s.

However outlandish this theory, there is no doubt it prompted some of the manoeuvres in the shadows against him, particularly by disaffected, right-wing operators in British Intelligence in the mid-70s, which justifiably fedWilson’s paranoia about MI5 and MI6. “I think you as journalists should investigate the forces that are threatening democratic countries like Britain,” he told a pair of reporters in 1976, just after he had left Number 10.

The dark whispers that swirled around him further dragged down his reputation – however unfairly – a process that was compounded by other controversies, such as his notorious 1976 resignation honours, known as the “Lavender List” and featuring a string of dubious business figures who had little connection with public service.

The list was said to have been drawn up by Marcia Williams, Wilson’s enormously influential private secretary, who herself had been ennobled in 1974 as Baroness Falkender. Clever, self ermined and ambitious,Williams had n invaluable to Wilson in his rise to top, making him a more relaxed, ctive speaker and deepening his sp of Labour Party opinion. ut she was also abrasive and ricious, with the result that she ked bitter rows and animosity oughout her time at his side.

“Wilson will not go down as one of great Prime Ministers, but if it not been for that woman, he would have gone down as the greatest,” said his legal adviser Lord odman.

In parts of Whitehall, she was known as “the Mad Duchess”, while the intense loyalty she inspired in Wilson gave rise to gossip that there was a romantic side to their relationship.

“Funny fellow, Wilson. Keeps his mistress in No 10. I kept mine in St John’s Wood,” sneered the former Tory Prime Minister Harold Macmillan.

Some of this stemmed from traditional misogyny towards strong, astute women – then comparatively rare in British politics.

Williams herself, who was unmarried though she had two sons with the tabloid journalist Walter Terry, reportedly told Wilson’s loyal wife Mary in 1970: “I have only one thing to say to you. I went to bed with your husband six times in 1956, and it wasn’t satisfactory.”

Wilson strongly denied the allegation and appeared to convince Mary, but to his press officer Joe Haines, who came to view Williams as a menace, he said with a tone of relief: “Well, she has dropped her atomic bomb at last. She can’t hurt me any more.”

Incredibly, the storms that Williams generated became so fierce and frequent during Wilson’s second premiership that there was even a discussion in Downing Street about having her murdered.

As this compelling book recounts, Haines “recalled that Wilson’s personal doctor Joe Stone said that he could dispose of her in such a way that it would seem to be from natural causes”. Haines made clear there was no way he would go down that road.

Thomas-Symonds convincingly argues that a macabre, gothic idea like this – though ultimately ridiculous – arose because Williams sowed such discord through her brittle personality and her fixation with control.

“She survived on a day-to-day basis on her ‘Purple Hearts’, a combination of amphetamine and barbiturate that kept her going. Her outbursts at people, including Wilson himself, showed that she had a status that others should not threaten.”

One remarkable example of her attention-grabbing behaviour occurred at an official dinner for the prime minister of Fiji in 1975, when she deliberately arrived 20 minutes late, then walked out as the guest of honour began to speak, only to return to the reception afterwards… with Frank Sinatra in tow.

But, beyond such incidents, this excellent biography shows that Wilson was a much bigger figure than the traditional negative caricature suggests. Although he never resolved the economic difficulties of his time and failed to tame the trade unions – typified by his botched attempt at reform in 1969 through a legislative initiative entitled In Place Of Strife that foundered on opposition from inside the Cabinet as well as the TUC – he left a huge mark on Britain during his eight years in Downing Street.

It was his first Government that presided over the legalisation of homosexuality and abortion, the first race relations and equal pay legislation, and the abolition of capital punishment. His second Government passed the most comprehensive health and safety law in British history, which dramatically reduced workplace mortality.

He was the first PM to hold a nationwide referendum on a great constitutional issue when he organised the 1975 vote on Britain’s membership of the Common Market, while he also kept our country out of the mess of Vietnam.

His faith in economic planning proved misplaced, as symbolised by the short-lived Department of Economic Affairs, established as a supposed engine of growth and a counterweight to Treasury orthodoxy.

But some of his rhetoric about “the white heat of the technological revolution”, the phrase he coined in his iconic speech to the 1963 Labour Conference, translated into real achievement, like the creation of the supersonic Concorde, the building of the Humber Bridge, the construction of the Post Office Tower, and the establishment of Milton Keynes.

Wilson himself was the driving force behind the foundation of the Open University, a phenomenal success story in education and social mobility. As Thomas-Symonds argues, Britain under him became a more free, equal, tolerant and open society.

He was a man of modesty and decency, whose sense of social obligation owed much to his upbringing in Huddersfield, where his parents were involved in the Congregational Church and where his father experienced occasional bouts of unemployment in his work as a chemist.

From his earliest days at school, Wilson proved to be an academically gifted child, with a phenomenal capacity for absorbing information and unique powers of concentration.

It was his razor-sharp mind that, despite his disadvantaged upbringing, won him a place at Oxford, where he soon proved himself to be one of the outstanding students in the university before his brilliance led him to the heart of wartime Whitehall. When he became an MP in 1945, his political rise was equally swift, becoming the youngest Cabinet Minister of the 20th century under Clement Attlee.

There is an argument that, intellectually, he was Britain’s brightest-ever Prime Minister, which makes it all the more poignant that, after he left the Commons in 1983, he was badly afflicted by Alzheimer’s before his death in 1995. But the clouds of decline and controversy should not blot out the heroic side of his record.

He was a finer office-holder than most of those who succeeded him.