Jacob Rees-Mogg grilled on backing for Liz Truss by Burley

Speaking to GB News host Dan Wootton, Ms James said the Foreign Secretary looked like she was doing a “recitation in the garden” after examining one of her campaign videos. Ms James said the South West Norfolk MP was “unconvincing” and lacked “genuine passion” when delivering messages.

She said: “I wouldn’t say she was not trustworthy, but she’s not good at delivering messages.

“I mean she doesn’t appear to own any of those messages, she doesn’t seem to have genuine passion that she’s trying to put in her words.

“She looks like a small child that’s been brought out to do a recitation in the garden rather than somebody that believes what they’re saying.

“We’ve got no gesticulation, we’ve just got a slight nodding of the head. 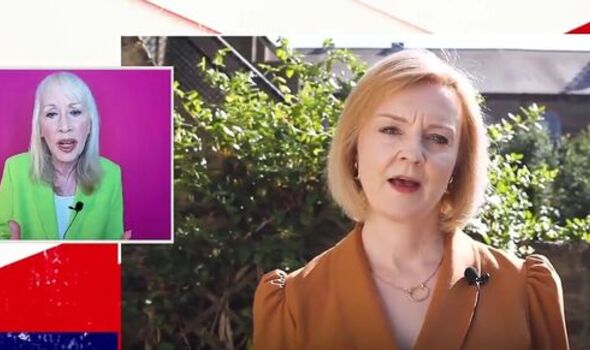 “And verbally and this is always a give away when she gets to the end of her most powerful statements.

“She does a verbal dime fall, her voice trails out.

“Now if you’re really trying to sell your message you believe in you keep the power in your voice right to the end.

“So unfortunately that makes her look unconvincing.”

It comes as Ms Truss was successful in progressing through the first round of the Conservative leadership contest after voting by Tory MPs.

Ms Truss received 50 votes from her colleagues and was in third place behind front runner Rishi Sunak who received 88 and Penny Mordaunt who received 67.

Kemi Badenoch on 40, Tom Tugendhat who received 37 and Suella Braverman on 32 also progressed to the next round.

However, Chancellor Nadhim Zahawi and 2019 runner up Jeremy Hunt dropped out after receiving only 25 and 18 votes less than the threshold of 30.

A spokeswoman for Ms Truss said she would ensure “Putin loses in Ukraine” and deliver the “benefits” of Brexit.

They said: “Now is the time for colleagues to unite behind the candidate who will cut taxes, deliver the real economic change we need from day one and ensure Putin loses in Ukraine.

“Liz has the experience to deliver the benefits of Brexit from day one, grow our economy and support working families.”

Ms Truss has the backing of Boris Johnson and prominent Tory grandees such as Jacob Rees Mogg and Nadine Dorris.

In a speech set to be delivered on Thursday, Ms Truss is due to emphasise her modest background and her desire to create an “aspiration nation”.

She is due to commit to cutting taxes including the reversal of the recent national insurance rise.