Mr. Kudlow was named the host of a new daily show on Fox Business set to begin later this year, the network said on Tuesday. He will also appear on Fox Business and Fox News as an on-air financial analyst starting Feb. 8.

This is the first major television gig secured by a senior Trump aide who stayed in the White House until the president’s term ended last week. It is also something of a hiring coup for Fox Business, which competes against CNBC and will now feature one of its rival’s longtime featured players.

Fox said that it would provide more information about Mr. Kudlow’s new weekday program at a later date.

Mr. Kudlow’s hiring is the latest example of the revolving door between Fox News and members of the Trump administration. But another prominent Trump defender may not be headed to the Rupert Murdoch-owned network so soon.

Kayleigh McEnany, the former White House press secretary, included an “employment agreement” with Fox News on a federally mandated disclosure form she filed earlier this month, signaling that she had landed a job at the cable channel.

Fox News on Tuesday had a different message for Ms. McEnany: not so fast.

“Kayleigh McEnany is not currently an employee or contributor at Fox News,” the network said in a statement.

Ms. McEnany and Fox News did speak after Election Day about a potential on-air role, according to a person briefed on the negotiations who requested anonymity to share the details of private discussions. But the network has paused those talks, even as it remains open to hiring Ms. McEnany at a later date, the person said.

Ms. McEnany did not immediately respond to a request for comment on Tuesday. 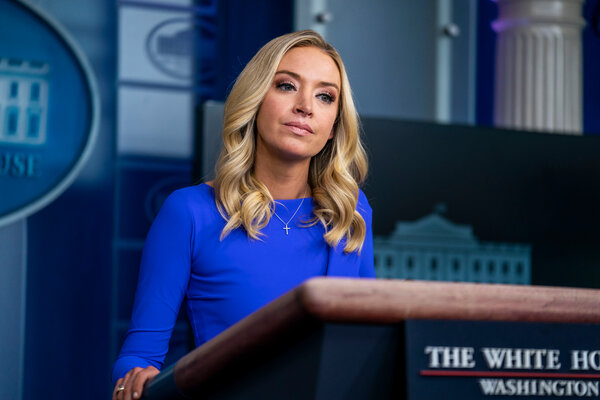 As the most prominent on-air defender of Mr. Trump in the tumultuous weeks after his loss in November, Ms. McEnany was a frequent guest on Fox News programs, particularly Sean Hannity’s prime-time show.

Before joining the White House, Ms. McEnany served as an on-air commentator for CNN. She started her media career at Fox News after college, working for Mike Huckabee, the former Arkansas governor and the father of Sarah Huckabee Sanders, another former press secretary to Mr. Trump.

Ms. Sanders joined the network as an on-air contributor shortly after she departed the Trump administration in 2019, but she and the network recently cut ties after she announced her candidacy for governor of Arkansas.