The Brussels diplomat was handed the award, at a virtual ceremony, for his role in defending Ireland’s interests throughout the Brexit negotiations. He received praise from Irish Prime Minister Micheal Martin and foreign minister Simon Coveney. The 2020 award show was forced online because of the coronavirus pandemic.

In a message from Dublin, Mr Martin said: “Over the past four years you have come to represent for so many of us see in Ireland all that is best about the European Union.

“Over the past four years a very particular bond has been formed between you and the people in Ireland.

“That you are so well known is a reflection of the fact that from the beginning spared no effort to understand the unique and disproportionate challenges facing our island in the context of Brexit.”

Mr Coveney added: “I had the privilege of working closely with you from the very start of the Brexit negotiations and you have never faltered through our regular meetings in Brussels, Dublin and beyond. 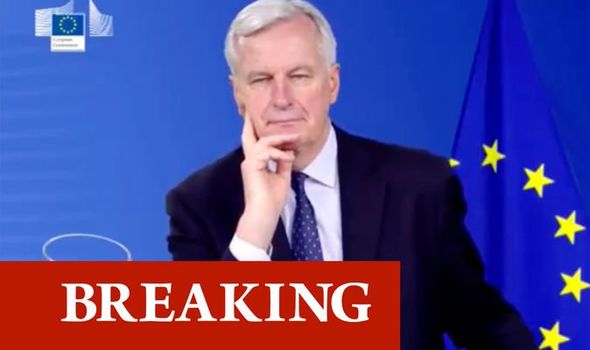 “I’ve been struck, not only by how effectively and persuasively you’ve represented the EU’s interest and values, but also by the enormous effort you’ve made to understand the specific issues affecting our island.”

Mr Coveney told viewers that he had invited Mr Barnier for a fishing trip in the west of Ireland to celebrate their work together during the Brexit talks.

European Movement Ireland made Mr Barnier their first non-Irish European of the Year.

It is the first time in their history that they have handed the prize to a foreigner.

Mr Barnier thanked the Movement for the award and the politicians for their “very kind words”.

He added: “Your organisation has played a key role in stimulating a debate on the EU here in Ireland.”