The Foreign Secretary furiously shut down the suggestion as he insisted the UK cannot continue to control only a fraction of its fisheries. Mr Raab revealed the bloc’s proposals put to the UK have been “outlandish”. Sky’s Niall Paterson had asked: “Is there a fix of allowing some form of access to the European Union to our waters for a limited amount of time? The noises in Government seem pretty positive to that.”

Speaking to Sky News, Mr Raab said: “Yes but what you’re not going to do is allow a decade to go by with us only controlling a fraction of our fisheries.

“Let’s remember on some of these things, some of the proposals and suggestions put to us are pretty outlandish frankly.

“They don’t get more reasonable by repetition.

“What we need is movement, we need some flexibility. 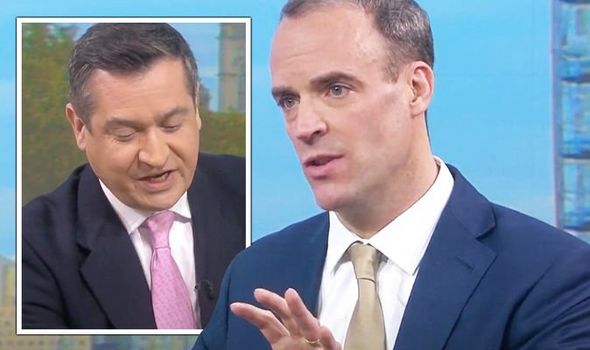 “On the positive side, if you look at the joint committee which was dealing with the outstanding issues in Northern Ireland, we’ve had some progress this week.

“That’s not just created reassurance around the issue of Northern Ireland but given us the sense that we can get there.

“But we will need that same flexibility and pragmatism on the FTA.”