Italy’s president rejected the resignation of prime minister Mario Draghi on Thursday after a day of political drama that threatened to bring down a national unity government that has been in office less than 18 months. Mr Saccone claimed that the country’s political instability could favour Russia’s aggression and motives, with the centre-right Forza Italia party senator telling Draghi’s critics he would be “doing Putin a favour”.

Mario Draghi, the former European Central Bank (ECB) president, announced he was to resign on Thursday after the 5-Star Movement, a coalition party, failed to back him in a confidence vote over his plan to combat the cost of living crisis.

He stated: “The national unity coalition that backed this government no longer exists.”

The 74-year-old went to the Quirinale Palace in Rome to meet president Sergio Mattarella and hand in his resignation but Mattarella, the supreme arbiter in Italian politics, urged him to rethink.

Mattarella asked Draghi, who is an unelected technocrat, to address parliament to get a clearer picture of the political situation. 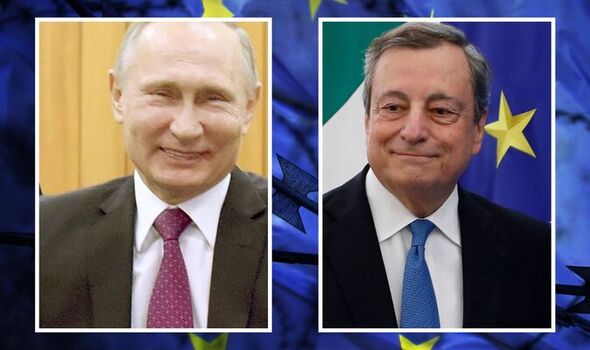 Italy’s political turmoil comes as the country faces a debt crisis and a secular lack of economic growth.

During Draghi’s 17-month premiership, Italian borrowing costs rose, something he acknowledged at a news conference two months ago.

He told reporters: “This shows I’m not a shield against all events. I’m a human being, and so things happen.”

Italy is big enough to bring down the rest of the eurozone periphery as its €2.5 trillion (£2.12 trillion) government debt pile is larger than those of the other four countries combined and too big for a bailout.

POLL: Who do you want to win Tory leadership contest? VOTE NOW

Ten years ago, the then ECB president restored market calm by saying the ECB would do “whatever it takes” to save the euro – code for buying the bonds of troubled countries.

Draghi is expected to appear in parliament next Wednesday and is likely to proceed before then with a planned trip to Algeria, an important gas supplier, on Monday and Tuesday, political sources said.

Divisions among Italy’s political parties over issues such as the rising cost of living and how to respond to Russia’s invasion of Ukraine are being amplified by the approach of a general election due to be held in the first half of 2023.

Draghi, Italy’s sixth prime minister in the past decade, has won plaudits for helping to steer Italy through the coronavirus crisis and his profile has helped give the country more clout on the international stage.