Mixed messages from the president and his advisers have muddled an already tumultuous negotiation. 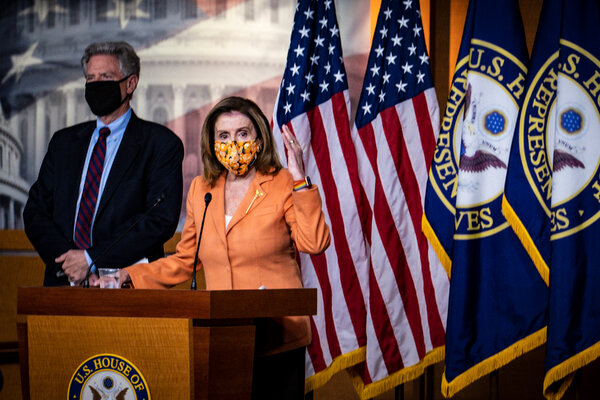 WASHINGTON — On Tuesday, the bipartisan stimulus talks were off, abruptly ended by a series of indignant tweets by President Trump. On Wednesday, there was a glimmer of hope when he suggested he might reconsider, and top negotiators haggled privately by phone over possible legislation.

By Thursday, the president performed a complete about-face and suggested that a deal could be at hand — then turned around and derided Speaker Nancy Pelosi of California, the top Democrat in the discussions, as “Crazy Nancy.” Ms. Pelosi, for her part, teased the announcement on Friday of legislation establishing a commission to advise Congress on whether the president should be forcibly removed from office for mental or physical impairments.

As tens of millions of Americans, schools and businesses watched the flurry of developments that could determine whether they would receive another infusion of desperately needed pandemic relief, confusion reigned in Washington about whether an elusive stimulus compromise was dead, alive, on life support or somewhere in between.

What remained clear was that the political stakes, which have long imperiled a bipartisan bargain, have only heightened. And the collateral damage across the country has continued to mount in the absence of federal funding, with more than 800,000 Americans filing new applications for state benefits, before adjusting for seasonal variations.

“The discussion from day to day can be confusing for all of us to follow,” Senator Mitch McConnell of Kentucky, the majority leader and the top Republican on Capitol Hill, told reporters at an event in Kentucky. “But we’re still engaging and hoping we can find a way forward.”