The prime minister has said it is “looking good” for 19 July to be the “terminus point” for England’s coronavirus restrictions – but did not rule out the prospect of further lockdowns in the winter.

“You can never exclude that there will be some new disease, some new horror that we simply haven’t budgeted for or accounted for,” Boris Johnson said when asked if he could discount the possibility of reimposing COVID-19 measures later this year.

Live COVID updates from the UK and around the world 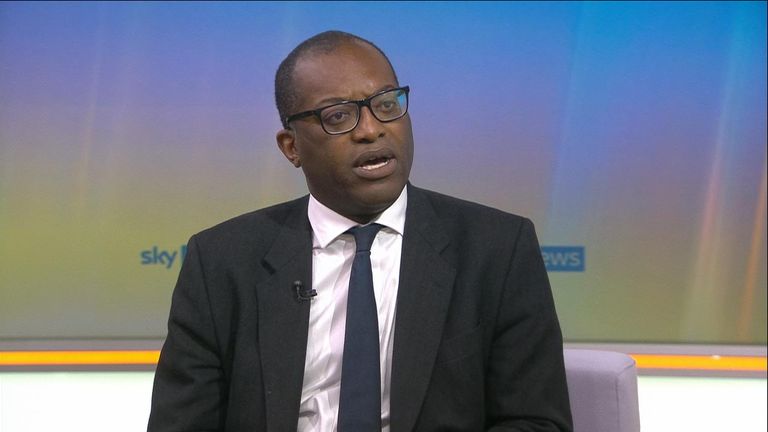 “But looking at where we are, at the efficacy of the vaccines against all variants that we can currently see, I think it’s looking good for 19 July to be that terminus point.”

The PM said the country could be in for a “rough winter for all sorts of reasons”.

He continued: “Obviously there are big pressures on the NHS, which is all the more reason to reduce the number of COVID cases now, give the NHS the breathing space it needs to get on with dealing with all those other pressures.

“We’re certainly going to be putting in the investment to make sure that they can.”

Government adviser Dr Susan Hopkins warned at the weekend there may be the need for winter lockdowns if hospitals become “overwhelmed” at some point.

Mr Johnson also played down the prospect of COVID restrictions being lifted early.

When he announced a four-week postponement of step four of England’s roadmap out of lockdown – pushing it from 21 June to 19 July – the PM said a review would take place on 5 July to see if action could be taken sooner.

But while Mr Johnson said the vaccination rollout was “going gangbusters”, Delta variant case numbers were “sadly going up still”.

“It’s going up by about 30% a week in cases, hospitalisations are up by roughly the same amount and so, sadly, are ICU admissions into intensive care,” he said.

“We’ve got to be cautious but we’ll be following the data the whole time.”

Downing Street has also sought to dampen down suggestions of an early unlocking, with the PM’s spokesman telling reporters: “We will monitor case data day by day to see if moving forward after two weeks is possible.

“You’ll see the data we are looking at – 10,000 cases recorded for the third day in a row on Saturday which is the highest level since 2 February.

Generally we have stuck to the dates we have set. I think now I am very focused on 19 July,” he said.

The PM also confirmed the government was “looking at” possibly exempting those who have been fully vaccinated from having to quarantine after returning from abroad.

But he played down suggestions a widespread relaxation of restrictions on international travel was in the offing.

“I want to stress that this is going to be – whatever happens – a difficult year for travel,” Mr Johnson said.

“There will be hassle, there will be delays, I am afraid, because the priority has got to be to keep the country safe and stop the virus coming back in.”